On Tuesday, September 27, Abbott World Marathon Majors (WMM) announced that moving forward, champions of the wheelchair division will now earn the same amount of prize money as elite runners competing in the series. The organization that hosts the prestigious road racing circuit—which includes the Tokyo, London, Boston, Chicago, Berlin, and New York City marathons—also shared that prize money will be extended to include the top five males and females in both categories.

While wheelchair racers earning equal pay is a step forward for para athletes, the restructuring of the series purse also includes a steep overall reduction in prize money for pro runners. Following the announcement, Runner’s World reached out to the leaders of WMM. Here is what we know about the change, and what it means for elites and the future of the series.

It marks a shift in priorities

When the WMM series started in 2007, the men’s and women’s champion—determined by athletes scoring points for their finishing place in each major race—each took home $500,000, launching a circuit then-billed as “the top echelon in the sport of marathon running.” At its inception, the series was focused on promoting elites. Over the years, that focus has shifted to promoting all participants racing in the series.

“We remain committed to providing the best experience for the elite athletes, but we have become much more focused on the everyday runner and how we can inspire people to try marathon running and make it a lifelong habit,” WMM CEO Dawna Stone told Runner’s World.

In 2017, the winners’ purse was reduced but the prize structure was expanded to award the top three, increase prize money for wheelchair racers, and include a charity donation program ($280,000). For the last several years, the male and female winners each took home $250,000 while second and third place earned $50,000 and $25,000, respectively. The men’s and women’s wheelchair division champions won $50,000. Second place earned $25,000, and third place received $10,000.

Following the strategy of promoting the journey of all participants, WMM appointed Stone as CEO in June. The former CEO of Running USA also founded Women’s Running magazine and the women’s half marathon series.

In September, the prize fund was slashed even further, but the prize structure was made equal across divisions. Now the purse for elite runners and wheelchair racers totals $100,000 for each category, $225,000 less for the runners with prize money shifted to include the top five finishers. Moving forward, athletes will now earn $50,000 for winning the series, $25,000 for second place, $12,500 for third, $7,500 for fourth, and $5,000 for fifth place overall.

When asked about the factors that led to the reduction, Stone said the landscape and earning potential for the world’s best marathon runners has “transformed” since the series started in 2007. “Through our long-standing relationships with the elite athletes and their managers, we know that they compete in the Abbott World Marathon Majors because of the standard of competition, the appearance fee, the event prize fund, and the global TV audience that each race individually gives the elite athletes,” Stone said. “As an organization we felt creating parity in AbbottWMM series prize funds for elite wheelchair athletes was the right decision.”

When asked if a $50,000 series prize compared to $500,000 would equally motivate elites and capture public attention, Stone said: “We believe that fans of the sport are most interested to see who finishes the year on top of the standings and that working with a range of athletes and sharing their stories across platforms and projects gives us more opportunity to capture public attention.”

In the same announcement, WMM said it would be “allocating funds and working with partners to develop other initiatives” that further promote wheelchair racing. When asked to elaborate on those plans, Stone said the initiatives are part of a five-year strategy aimed to “support the full spectrum of marathon runners around the world.” 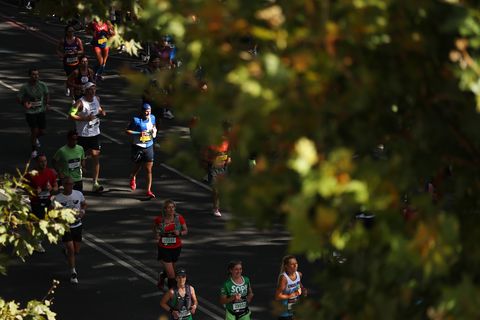 Following this strategy, WMM recently partnered with World Athletics and Mass Participation World to cofund an inspirational video and digital toolkit to help event organizers promote the sport as racing returns amid the pandemic. In years to come, WMM is also planning a potential expansion of the series to Africa, Australia, and Asia through a candidacy program limited to major international cities with local government support. Criteria for inclusion involves a multi-year process, which requires the race to meet strict criteria, including “operational excellence, the caliber of the elite and elite wheelchair athletes, and the overall participant experience.” So far, three marathons—the Sanlam Cape Town, Blackmores Sydney, and Chengdu marathons—have been announced as potential candidates. Stone said more announcements in the five-year plan will follow.

Athlete managers were informed prior to the announcement

Before the announcement was made, a meeting took place between Stone and the managers of athletes who recently won the series or who were in contention for this year’s win. “On the whole, the managers understood our rationale for the changes to the prize structure, and they appreciate all the work that the six major races individually and AbbottWMM as a group has done for marathon running globally,” Stone said.

Broadcaster and writer Toni Reavis spoke to one of the managers, who wished to remain anonymous, and shared their experience in his blog commenting on the changes. They expressed disappointment in the series’ decision to reduce the prize structure. “This is a real slap in the face,” the manager told Reavis. “Why go in this direction? If you reduce the prize to $50,000, it’s no incentive at all.”

As Reavis opined, due to poor marketing and promotion, among other factors, the sport has moved away from an emphasis on elite competition and the series’ decision to slash the prize fund reflects that. “Think about it. Who pays the bills? The people who run 4 and 5 hour marathons who spend hundreds of dollars to enter,” Reavis wrote. “So, if you cut the elite series prize from $250,000 to $50,000, where is the consequence? The people in the back of the race have no idea who the frontrunners are, or care.”

Despite the significant reduction in the series prize titles, the partnership between WMM and the Athletics Integrity Unit, the organization that conducts all out-of-competition drug testing, will continue. “The move to parity in the AbbottWMM series prize money and the reallocation of those funds to other projects in the coming months and years has no bearing on that partnership,” Stone said.

The organization’s decision to equalize prize money follows other major races and governing bodies increasing their support towards wheelchair and para athletes in recent years. In 2021, the United States Olympic Committee adjusted the prize money for Paralympic athletes to equal that of Olympians. In July, London Marathon race organizers set a record by announcing that the 2022 race will host the richest wheelchair competition in history with a prize fund totaling $199,500.

When she started competing in the WMM series in 2009, there was no prize money offered to elite wheelchair athletes. Despite dedicating herself to training and racing the same courses as top runners, McFadden didn’t feel like an elite athlete for many years, she says. Now, she’s excited to be part of the change.

“What it means now is that we have elite status, that we matter,” McFadden tells Runner’s World. “The athlete today, that 18-year-old that’s going to be starting their first marathon with Abbott World Marathon Majors, is going to walk in with equality.”

The new prize fund structure will be put into effect immediately. For elites to win their category in the WMM series, they have to score the most points in the qualifying races during the scoring period. This year’s series began with the Tokyo Marathon on March 6. The winners will be announced after the New York City Marathon on November 6.

Taylor Dutch is a writer and editor living in Austin, Texas, and a former NCAA track athlete who specializes in fitness, wellness, and endurance sports coverage. Her work has appeared in Runner’s World, SELF, Bicycling, Outside, and Podium Runner.