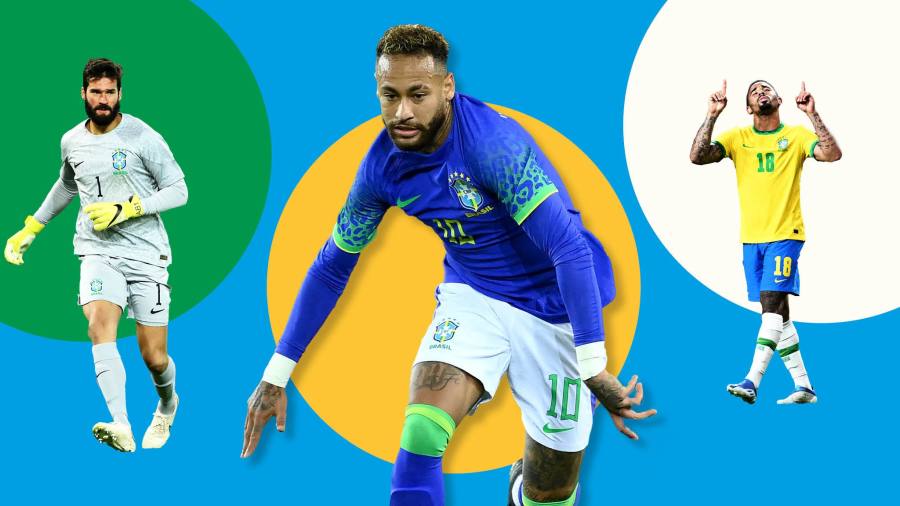 Over a half-hour in Belo Horizonte in 2014, Brazil hit rock bottom. During the World Cup semi-final against Germany the host’s defence, without its controller Thiago Silva, was all over the place — except in front of its own goal. David Luiz and Marcelo kept making forward runs at all the wrong moments. A vast space in front of the central defence was occupied only by pressing Germans, who won ball after ball and powered into Brazil’s penalty area.

After 29 minutes the Germans were 5-0 up. The bars on São Paulo’s Avenida Paulista were packed with Brazilians laughing in disbelief.

The final score of 7-1 was a one-off, but Brazil’s vulnerability against organised, high-pressing European teams was structural. Brazil was knocked out of four World Cups from 2006 to 2018 by a different western European country. The “divine canary”, a nickname one Dutch writer gave to the great Brazilian teams after the players’ yellow shirts, was feared extinct.

Now, finally, the Seleção seem to have caught up. They have organised themselves, and got lucky with a flood of attacking talent. Their playmaker Neymar, entering his third World Cup, says this is the best Brazil he has played for. The team are the bookmakers’ favourites. Yet the five-time winners remain beatable.

Under Tite, Brazil’s coach for the past six years, an eternity in this job, they regained excellence fast. They might have won the last World Cup if Fernandinho’s freakish own goal and Thibaut Courtois’ equally freakish goalkeeping brilliance hadn’t given Belgium the quarter-final.

In South America’s World Cup qualifiers for Qatar, Brazil racked up 45 points, two more than Argentina’s 20-year-old record despite their final match against the Argentines being cancelled. Watching the team’s last friendly before the World Cup, a 5-1 hammering of Tunisia in Paris in September, it felt at times like the best of Brazil mixed with the best of Bayern Munich. There was Brazilian touch and short passing, coupled with almost German-level high pressing to win back the ball, and when needed, rapid forward passes to the rapid strikers.

It’s up front that Brazil have improved most. Such are Tite’s attacking riches that the nine forwards he is taking to Qatar do not include Liverpool’s Roberto Firmino. The likes of Real Madrid’s Vinícius “Vini” Junior and Rodrygo, Barcelona’s Raphinha, Arsenal’s Gabriel Jesus and Spurs’ Richarlison have mastered grown-up tactics at leading European clubs but also have the creativity to make their own chances. Tite recently told Reuters: “The other day Neymar looked at me and said, ‘Coach, these kids that are coming, it’s just nuts. What a good headache to have, trying to put them all on the field.’”

At last there are nippy forwards running on to Neymar’s flicks. Brazil should be lovely to watch. And Neymar’s right foot and Raphinha’s left are deadly from dead balls.

Brazil are in a tough group with Serbia, Switzerland and Cameroon. Yet against these teams they may start daringly, with the forward trio of Vini cutting in from the left, Raphinha from the right and Richarlison as a classic centre-forward. Wingers (assets that Brazil lacked for years) can stretch opposing defences wide, making space in the middle for playmaker Neymar and his midfield companion Lucas Paquetá.

That would leave Casemiro — the brain of a chess grandmaster, the body of a heavyweight boxer — to do most of the defensive hoovering in midfield. Against stronger teams in knockout rounds, his Manchester United teammate Fred will probably join him, with Neymar replacing one of the front three as a “false nine” centre-forward.

In goal, Liverpool’s Alisson is an excellent keeper and excellent footballer rolled into one. It’s in defence that doubts creep in. Danilo at right-back is competent. Brazilians will hope that his understudy, 39-year-old Dani Alves, picked for the squad to widespread dismay back home, will be free to focus on his off-field duties of maintaining team spirit.

Marquinhos in central defence is one of football’s best markers, blockers and tacklers. But beside him, Thiago Silva, though still perfect positionally, is now 37, his pace waning. “O Monstro” (The Monster) is happier when shielded within a central defensive trio, but for Brazil he only has Marquinhos, and in this attacking side, Thiago often has 40 metres of space behind him.

Then there’s Brazil’s longstanding weakness: left-back, the zone exploited by Argentina’s Angel Di María for the only goal of last year’s Copa América final. Neither Alex Sandro nor Alex Telles, the potential left-backs in Qatar, inspires confidence. Brazil’s opponents will aim to play long balls down that flank and counter, leaving Thiago struggling to get across on time.

Brazil still need to prove they can cope with European (and especially western European) organisation and pace. They haven’t met a team from the continent since beating the Czech Republic in March 2019. But it’s possible that in Qatar we’ll spot the re-emergence of the divine canary.