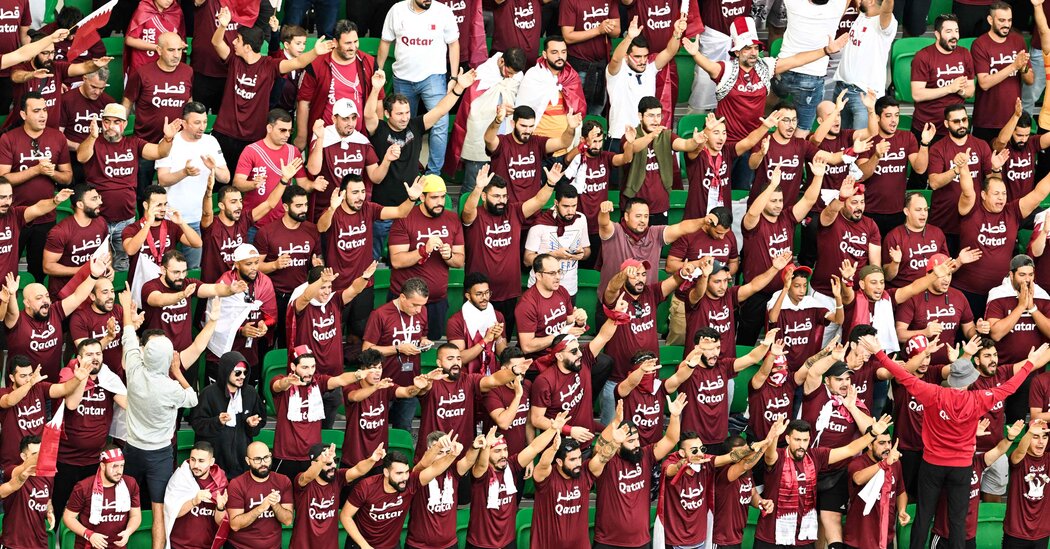 AL RAYYAN, Qatar — The cheering only stopped for the national anthem, and when it reached its peak, an eternity into stoppage time, it could be heard and felt across the Persian Gulf, if not around the globe.

Iran, a country mired in deadly protests and a soccer team making a striking statement, celebrated a 2-0 victory over Wales that could not have been scripted any better for drama.

There was the incessant noise from fans at Ahmad Bin Ali Stadium, a building sense of confidence on the field and, in the end — beyond the end, deep into injury time — a percussive strike of a goal from Roozbeh Chesmi.

Then came another before the crowd had a collective moment to catch its breath, a deft floater from Ramin Rezaeian, just before the referee whistled the match over.

WHAT AN ENDING. Iran scores two goals in stoppage time to get the victory over Wales 🇮🇷

Rewatch their last minute heroics in our 90′ in 90″ highlights ⬇️ pic.twitter.com/5PGDs1I5Fc

Players collapsed. Fans leaped. A few wept in joy, but most bounced in elation and carried the feeling out of the stadium, back into Doha and beyond, toward a vital game with the United States on Tuesday that could decide which team advances to the round of 16.

The U.S., which tied Wales to open the tournament, was set to play England, the leader in Group B, later on Friday night local time.

The game began with a dark pretext. Since September, Iran has been mired in protests following the death, in custody, of a 22-year-old woman named Mahsa Amini. She had been arrested by the morality police for not adhering to hijab law, which mandates head coverings for women.

In Qatar, across the Gulf from their home country, Iran’s fans have made their displeasure clear. The national anthem was met with jeers from many on Friday. A woman raised a No. 22 jersey with Amini’s name. Men and women cried.

The players lined up on the field, meanwhile, halfheartedly mouthed the words, a change from the opener against England earlier in the week when they gave the anthem the stoic silent treatment, a form of protest that drew global attention.

Beyond the backdrop of that unease about the future of the country, with a fan base that may be as incessantly noisy as any here at the World Cup, Iran supporters exuded nothing but solidarity, sharing the stadium with the vocal “red wave” of Welsh fans.

It was longer than that. A taut and scoreless match, tipping toward Iran in the second half, turned in the 86th minute. Wales goalkeeper Wayne Hennessey was given a red card after charging a ball well outside the box and taking down an Iranian player when he got to it; his ejection left Wales a man down and with a backup goalkeeper, Danny Ward.

At that point, Wales hoped to squeeze out a tie. But Iran’s attack had been buzzing, brimming with confidence, unshaken by a string of missed opportunities, including balls that hit both goal posts about 30 seconds apart. A goal was a matter of time, if there was enough of it.

“They posed a constant threat,” Wales Manager Rob Page said, without a note of bitterness toward the red-card call. “We just could not get going in the game.”

The ticking clock became Iran’s prime opponent in injury time. Eight minutes in, though, Chesmi intercepted a poor clearing attempt by Wales and, about 10 yards outside the penalty area, lined up a shot. His skidding scorcher just got past the substitute keeper’s diving reach.

Iran’s players poured onto the field. Fans turned their steady chants into uncontrolled cheers. The game felt over. It was, at least in spirit, if not in time. Soon, Rezaeian took a pass at about the point where Chesmi had just scored. He took a couple of dribbles to draw a defender and the keeper, and eased a shot past them.

It was a second exclamation point for Iran and all its fans.

Iran had come to the tournament the ultimate unknown — a solid team, but one facing the uncertain effect of the turmoil at home. The 6-2 loss to England was an embarrassment, and Queiroz tried to protect his players from the politics. He confronted a BBC reporter after a news conference, tired of hearing them have to address questions about the protests.

He would like to think that Iran, now, is back to simply playing soccer, with a defining game against the United States ahead.

But the story line is far more complex than that. It could be seen on the wrenched faces of those crying during the anthem or cheering the goals.

It could be seen on the T-shirts, like those sprinkled in the crowd that read “Woman Life Freedom,” but nowhere more than on the jersey that bore Mahsa Amini’s name and age when she died.