The family of a fallen IDF soldier being held in Gaza briefly scuffled with police on Friday as they tried to reach the Strip’s border along with hundreds of supporters as part of a protest.

Marchers called on the government to act to return the bodies of Hadar Goldin and Oron Shaul, as well as two other Israelis in Hamas captivity.

The march occurred shortly before Israel launched a military operation in Gaza against the Palestinian Islamic Jihad terror group, which has for days been threatening to attack Israeli targets near the border. The IDF had closed off most major highways along the Gaza border on Tuesday amid concerns of strikes by the group following the arrest of its West Bank leader.

Police said demonstrators violated an agreement not to proceed past the Yad Mordechai Junction, roughly two miles north of the Erez pedestrian crossing into the enclave.

The march was led by the Goldin family, marking eight years since their son Hadar was killed during the 2014 Gaza War and later kidnapped by Hamas fighters along with the body of slain soldier Oron Shaul. The demonstrators also called for the release of Avera Mengistu and Hisham al-Sayed, two civilians with special needs who crossed into Gaza on their own volition later that year and have been held by Hamas ever since.

Police said demonstrators refused repeated calls to cease advancing toward the border and that one participant was briefly detained for disorderly conduct. “The Israel Police will allow the right to protest, but will not allow the risk of human life,” law enforcement said in a statement, calling on the public to abide by current security guidelines.

The Goldins began their march on Wednesday, departing from their home in Kfar Saba, just over 50 miles from the Gaza border.

In statements to reporters during the Friday leg of their march, the Goldin family tore into current and previous Israeli governments for not doing more to bring back the Hamas captives. They argued that humanitarian measures that the government agrees to advance for the Gaza Strip should be contingent on the return of their son and the other three Israelis held in the Strip.

The government has long held back from advancing major humanitarian projects to rebuild the enclave, which suffers from massive economic hardship due to repeated rounds of violence with Israel and a blockade maintained by the IDF — and to a lesser degree Egypt — to prevent the smuggling of weapons for future wars. 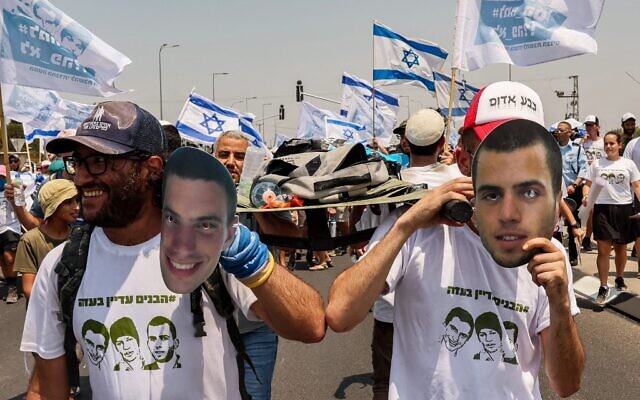 Demonstrators marching with symbolic remains from the Israeli city of Ashkelon arrive at the Karmia kibbutz on August 5, 2022 in a rally called by members of the Goldin family. (JACK GUEZ / AFP)

However, Israel has advanced more measured steps aimed at preventing the total collapse of the Gazan economy, such as allowing in COVID-19 vaccines and ventilators and granting entry permits to thousands of Palestinians to work in Israel each day, performing blue-collar jobs essential for Israel’s economy. Those initiatives have been widely backed by the security establishment, which views maintaining stability in the enclave as a national security interest.

But these steps have infuriated the Goldin family, which claims successive governments have paid lip service to their cause while not taking any action when given the opportunity. This aerial view taken in the Israeli city of Kfar Saba on August 3, 2022 shows demonstrators marching in a rally called by members of the Goldin family. (JACK GUEZ / AFP)

“And when I talk about political reasons, I’m mainly talking about cowardice. And now we have Prime Minister Yair Lapid who has just taken office, and must show courage and responsibility and bring back the soldiers and solve the problems facing the residents of the south.”

“Bringing Hadar, Oron, Avera and Hisham is the small thing,” said Hadar’s mother Leah Goldin. “The big thing is to restore our national pride, to restore ourselves to who we really are and to not surrender to arch-terrorist [Hamas leader] Yahya Sinwar, who murdered Hadar during a ceasefire, kidnapped him and holds him to this day.

“We have an entire army and an entire government that kneels and responds to all of his whims and doesn’t even ask to return [the boys]. So we decided to take action after eight years and simply stand up on our own and march until we get the boys back,” she added. 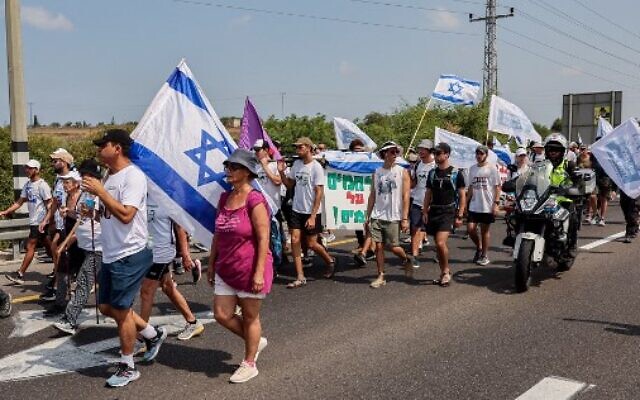 Demonstrators march from the Israeli city of Ashkelon to the Karmia kibbutz on August 5, 2022 in a rally called by members of the Goldin family. (JACK GUEZ / AFP)

Hadar’s brother Tzur Goldin added, “Hadar has been abandoned in Gaza for eight years because [the government] are afraid of Hamas.”

“Hadar, Oron, Avera and Hisham lie on Hamas land and the government tramples on them every day and gives money to Hamas.”