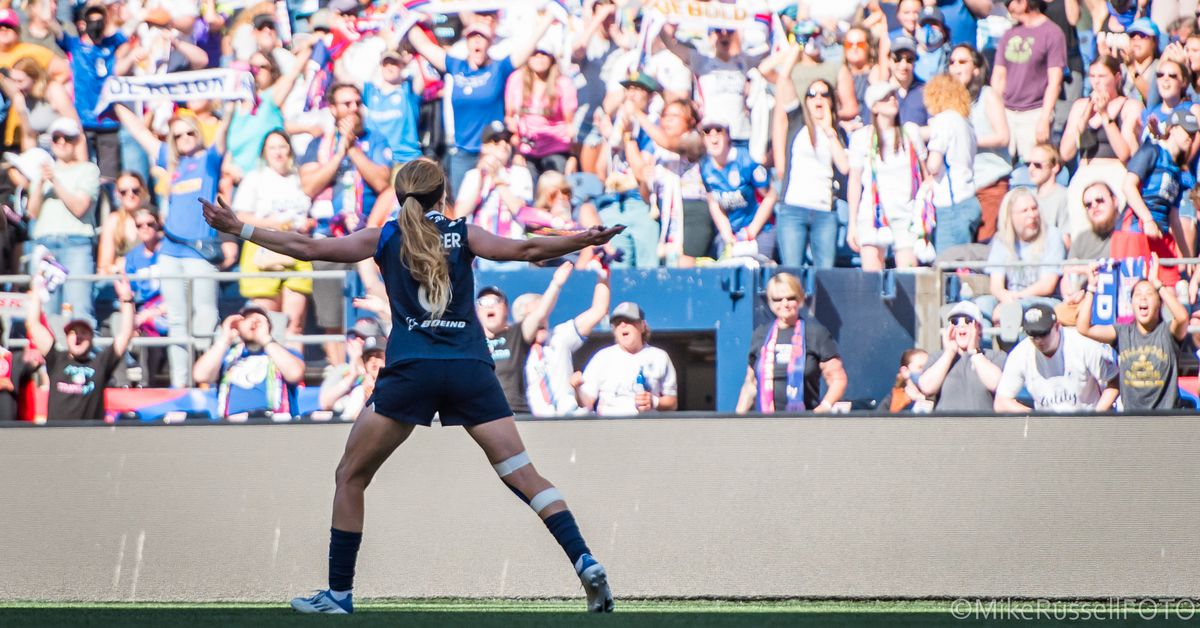 When Sam Hiatt was growing up in the Seattle area, she understood first-hand the magic of Lumen Field. She remembers the Seahawks game where fans erupted with so much force, they caused a mini earthquake. And Hiatt was in the stands for plenty of Seattle Sounders playoff games, where Seattle boasted one of the most electric atmospheres in U.S. soccer.

Now, the starting centerback for OL Reign has a chance to make history with her club. At home, in front of friends and family. At Lumen Field.

The club has currently sold around 14,000 tickets, already a standalone attendance record for OL Reign — but their aspirations are much higher. Hiatt and the team want to get to at least 20,000 for Sunday’s NWSL semifinal, which kicks off Oct. 23 at 4:30 PM PT. Notably, the other two NWSL playoff games that have been played this year both topped 20,000 and this week’s Portland Thorns match should get at least that high as well.

“I am so excited. I’ve loved playing at Lumen every game this year,” Hiatt told Ride of the Valkyries with a big smile. In their first year playing full-time at Lumen Field, the Reign took a big leap forward in attendance, breaking multiple standalone attendance records for the club as the season progressed. They also lost just one of the 14 matches they hosted at Lumen Field this year.

OL Reign hope to win and smash their attendance record yet again in their biggest home match of the year. In fact, the players are so hyped for the game, they’ve been making daily predictions of ticket sales — putting their guesses on a board before the big number for the day is revealed. They’re all hoping, of course, that the highest guess wins in the end.

The 24-year-old Hiatt, who played youth soccer with Crossfire and Seattle Prep, said that OL Reign’s final match of the regular season — where the team won the NWSL Shield in front of 10,746 fans — was already really loud. Playoff soccer at Lumen Field adds a whole new dynamic.

“I remember going to big Sounders games, Seahawks games in that stadium, and to be able to play an NWSL semifinal here with the Reign is such a dream come true. It’s been amazing seeing the support for women in sports and women’s soccer across the league this year. I really hope that Seattle shows up, too. We have a great opponent, we play such a fun style to watch, and I think it’s a really cool opportunity for people to come out and see a good game.”

As for their opponent, OL Reign will be facing the Kansas City Current, a team that finished fifth in the league table after dominating during a 13-game unbeaten streak in the middle of the season. One thing that stands out to Hiatt about OL Reign’s semifinal opponent is their mentality. The Current are tied with the Reign for the number of matches in the regular season where they came back and got a result after going down a goal. Both clubs earned a draw or win in seven of those matches, which puts them at the top of the league.

“I think Kansas City has a really great team mentality, and I think they’ve shown that throughout the year honestly. You could kind of see, even just from the outside looking in, it seems that they have a really unified mentality and are all working for each other,” Hiatt said, noting that she feels the Reign have that same mindset.

The numbers back it up. In addition to showing they can come from behind to get a result, Hiatt was part of a backline that conceded the fewest goals in the league all season. On top of that, OL Reign didn’t allow a single goal after the 75th minute nor any goals on set-pieces. The team came from behind three times in their last six games to earn a win or draw. That, combined with their defensive discipline, is all part of a team mentality that makes OL Reign incredibly hard to beat.

Becki Tweed, an assistant coach with NJ/NY Gotham FC, pointed to that gritty mindset in a playoff preview piece written by Jenna Tonelli for Nets Republic.

“They just believe that they can win, they’re really savvy,” Tweed noted, while also calling out how many players OL Reign have who can take over and change a game — players like Megan Rapinoe, Jess Fishlock, Rose Lavelle, Sofia Huerta, Bethany Balcer, Jordyn Huitema. OK, the whole darn roster, from top to bottom.

“It’s not easy to go down a goal and come back, or even two goals. And I think that’s something that we take pride in,” Hiatt said. “It’s good to have to go through those experiences when it comes time for the playoffs, because then you know that it doesn’t matter what happens, you can grind out a result if necessary. I think we’ve won in every way, shape, or form this year, whether that’s scoring early or scoring late, coming from behind, holding a lead. And so all of those experiences culminate in us just having the confidence that whatever happens, we can take care of business.”

OL Reign are in form at a great time, as well. They come into this match riding a seven-game unbeaten run that includes four on the road. They also boast a league-leading 6-1-4 record at home during the regular season.

So, as Hiatt and OL Reign look to book their ticket to the NWSL Final in Washington, D.C., they are pumped to have the chance to show Seattle fans — and the world — who they are when they step on the pitch at Lumen Field.

“Now more than ever is the time to support us — obviously OL Reign, but NWSL players and women in sports in general,” Hiatt said. “Seattle has a history of getting a lot of fans out to sporting events and having a lot of pride in their sports teams. And I think now is the time to step up and continue to show that pride for OL Reign as well. We have world-class players. It’s gonna be a great game. So everyone in the greater Seattle area, we would love to see you Sunday at Lumen.”