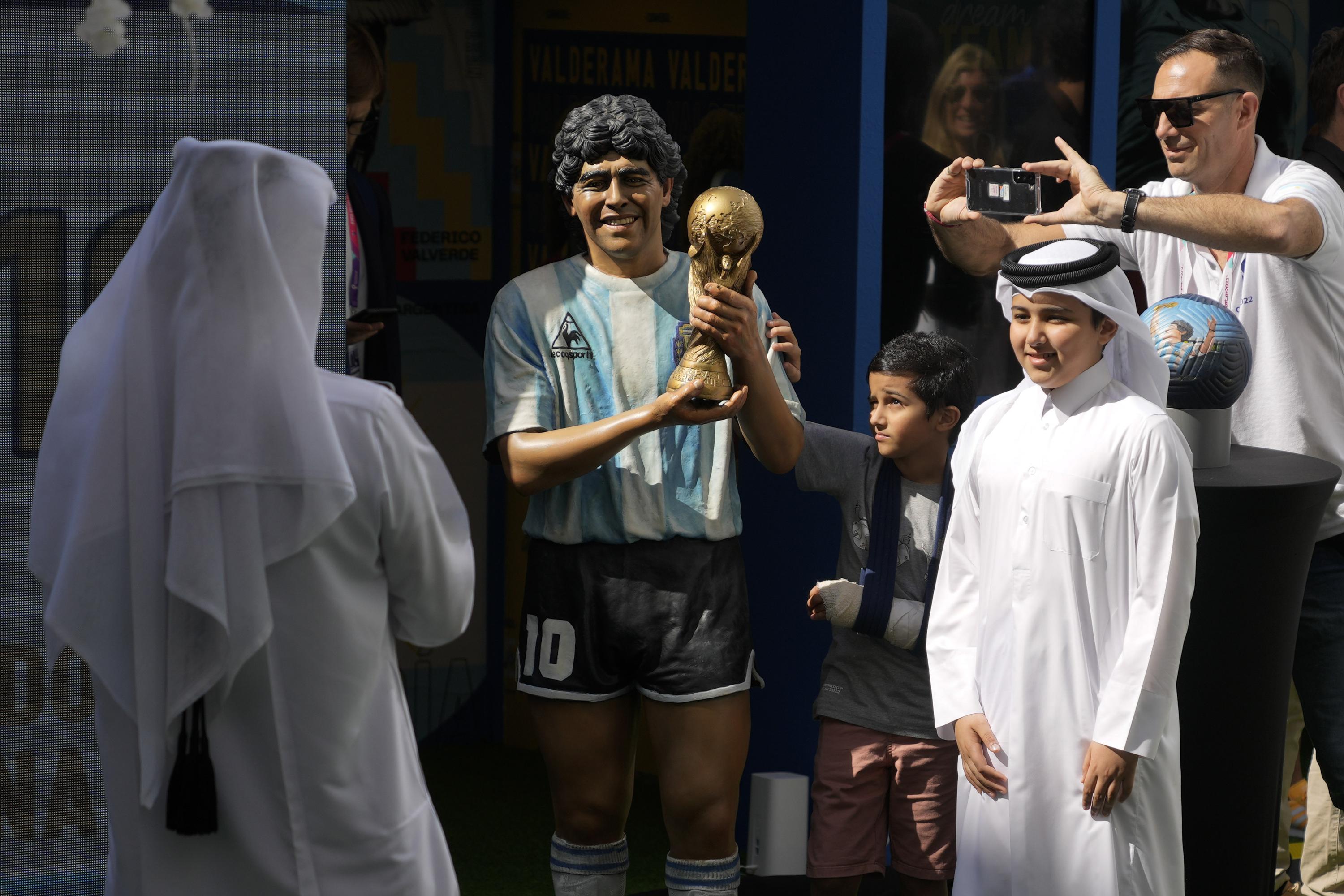 DOHA, Qatar (AP) — No matter what happens on the field, this World Cup will be a special one for Argentina.

It likely will be the last World Cup for Lionel Messi and already is the first since the death of Diego Maradona. The Argentine great died exactly two years ago Friday.

Maradona, his nation’s beloved soccer “God,” had been a presence for Argentina at every World Cup since 1982 as a player, coach of elder statesman.

Maradona died at age 60 on Nov. 25 in 2020, a date most Argentines will never forget. He passed away while under hospital care in his home following brain surgery, and judicial authorities continue to investigate if medical negligence was involved.

Several tributes were dedicated to Maradona ahead of the 2022 World Cup, both in Argentina and in Qatar.

“Diego is immortal, he is still with us,” FIFA president Gianni Infantino said Friday in front of a real-size statue of Maradona unveiled at an event in Qatar organized by South American soccer confederation CONMEBOL.

“What this man has done to get people to fall in love with this sport, maybe nobody else has been able to do.”

Infantino said that at every World Cup going forward will be a day reserved to celebrate Maradona.

“Everyone knows about the unique sincerity and charisma that Diego had,” Infantino said. “He was a great leader in Argentina, South American and the entire world. We have to keep celebrating him.”

Several former Argentina teammates of Maradona were at the event in Qatar. Argentina fans planned to gather in his honor later Friday in Doha.

In Buenos Aires, a huge mural had already emerged of Maradona wearing a national team jersey and holding his right hand in a fist, a defiant expression on his face. The massive piece of artwork climbs 148 feet high and 131 feet wide (45 meters by 40 meters) and was painted on the side of a 14-story building in the Argentine capital.

Another mural with images of Maradona was put together in Doha not too many kilometers (miles) from where Lionel Messi and Argentina were shocked 2-1 by Saudi Arabia in the team’s opener.

Messi, playing in his fifth World Cup, had told FIFA ahead of the Qatar tournament that it was “strange, different” not to see Maradona in the tribunes or the “people going crazy when he appears.” He said he felt Maradona would always “be present somewhere.”

Some of his best — and worst — moments came at the World Cup, from the “Hand of God” goal against England in 1986 to his failed doping test that got him expelled from the tournament in 1994.

Maradona led Argentina to the title in 1986, when his hand goal in the quarterfinals against England became one of the greatest — and most controversial ones — in tournament history. In that same match, he also scored one of the best World Cup goals ever after a run past opponents that began on Argentina’s own field.

Not long before the 2022 World Cup kicked off, the Argentine soccer association received the original shirt that Maradona wore in the 1986 tournament as a gift from Germany great Lothar Matthaus, who exchanged jerseys with Maradona after Argentina’s 3-2 win at Azteca Stadium in Mexico City.

As Argentina’s coach in 2010 in South Africa, Maradona led the national team to the quarterfinals, when it was eliminated by Germany.

One of the most disturbing images of the star at a World Cup came eight years later in Russia, when an overweight and somewhat disoriented Maradona collapsed at the stadium in St. Petersburg following a 2-1 victory over Nigeria, when Messi scored one of the goals.

The 35-year-old Messi likely won’t be back for another World Cup four years from now. And if he can’t find a way to lead this year’s team to a good result against México in its second game on Saturday, Argentina’s first World Cup without Maradona will come to an end without Messi as well.