The Israeli wheelchair basketball team took home the gold in this year’s Maccabiah Games, beating out their multinational competitors at the Jerusalem International YMCA.

In the game, which was held on July 21, the Israeli team defeated the nominally American team, which was in fact made up not only of Americans but also Israeli and British basketball players, due to the small pool of athletes eligible to participate in the games.

“We originally had a team of six, but two of them went off to the world championships in Thailand, and one stayed behind because of COVID,” said Moshe Kraiem, a member of the US team.

To ensure that there was a sufficient number of athletes, the Israeli delegation sent their own players to the US team, keeping the competition ongoing.

Maccabiah wheelchair basketball had its brief spotlight in the American public eye last month after ESPN broadcast a last-minute three-point shot by Alon Dorron, an Israeli player for the combined US team.

The tournament presented US team coach Michael Rosenkrantz with the opportunity to visit Israel for the first time in his life. Although his ability to coach the team while in Israel was hampered by his contraction of COVID, he was able to make it to all the games after being released the week earlier.

“We really were only to hold one practice,” he said. “I had COVID so I wasn’t even able to go to the practice, so that made it a little bit difficult to be cohesive.”

Rosenkrantz maintains that additional preparation as a unified team would have helped their performance in the finals.

Rosenkrantz got his start in wheelchair basketball while working as a volunteer in India, where he coached basketball at the New Delhi YMCA. Two years into his assignment, he met people from a group called Wheelchair Athletes Worldwide while on a brief trip back to the US.

“Their mission was to bring sports wheelchairs to countries and do projects. I said, ‘You guys need to come to India,’ and so in November 2011, they came and we did two weekend workshops in wheelchair basketball,” said Rosenkrantz. In 2012, he continued to coach the sport in Nepal. 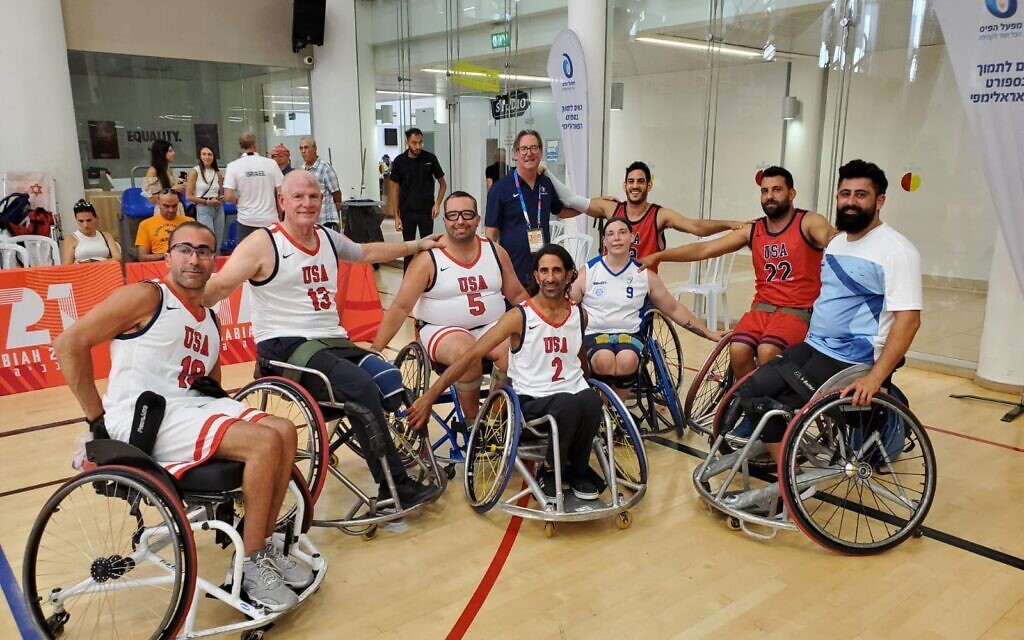 The US wheelchair basketball team, consisting of American, Israeli and British athletes, pose for a group photo after a match at the Maccabiah Games in July 2022. (Courtesy)

Rosenkrantz discovered Maccabiah due to his involvement with the National Wheelchair Basketball Association while coaching in the US. The organization sent out a notice looking for Jewish wheelchair basketball players to play for the 21st Maccabiah Games. He reached out, offering to coach the team, and was accepted.

“There’s no reason why Maccabiah can’t have more adaptive sports teams,” Rosenkrantz said. “I think it’s really important that this becomes bigger for the Maccabiah Games. I know there are Jewish athletes out there with disability, 10-15% of any country’s population are people with disability, the question is about finding those athletes.”

Seth Goldberg, the US team captain, felt the Maccabiah did a good job of respecting wheelchair basketball as a sport. The sport, for instance, is part of the general competition, it’s not a separate event. The Israeli team’s gold medal counts toward the delegation’s overall tally.

“The Maccabiah Games are an inclusive and diverse organization,” said Goldberg, who has been playing wheelchair basketball since he was 10 years old. 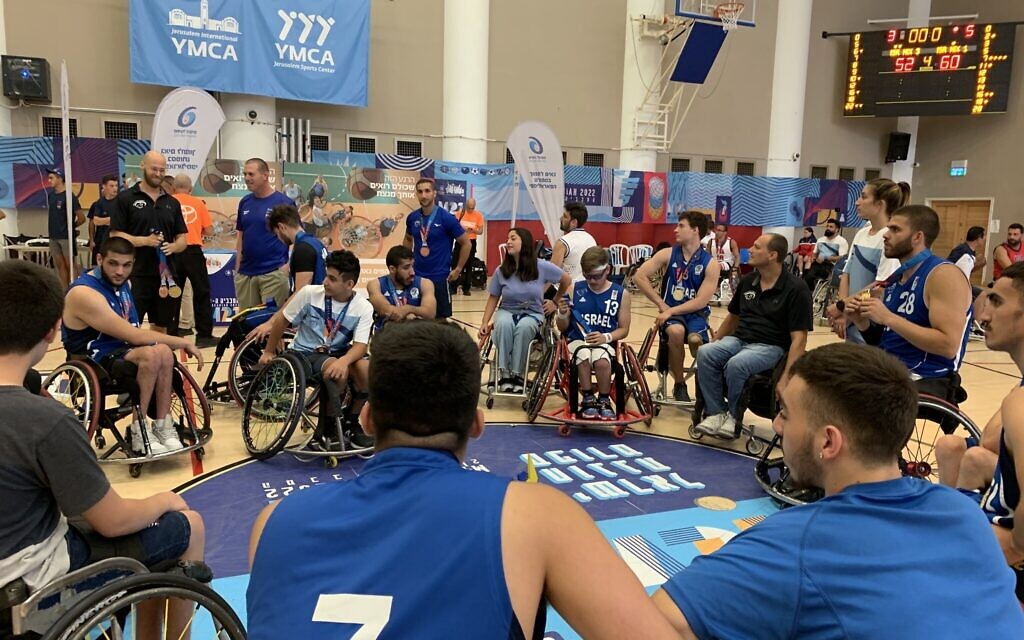 The Israeli wheelchair basketball team gathers in a circle after taking gold in the finals of the competition in this year’s Maccabiah Games at the Jerusalem International YMCA on July 21, 2022. (Charlie Summers/Times of Israel)

“Back at home, there’s the Olympics and the Paralympics, they have two separate contests. What’s really unique about Maccabiah is that they incorporate able-bodied and paralympic athletes into one.”

Although Goldberg was satisfied with how the games were organized, not all of the players believed that Maccabiah did the sport justice.

“It was basically just us playing ourselves and that’s disappointing,” said Amit Vigoda, a member of the Israeli team and the season’s MVP. “But, you know, at the end of the day, there’s not really that many disabled Jewish people around the world.”

At the age of 11, Vigoda had his leg amputated below the knee due to an orthopedic condition that caused his leg to continuously fracture. He doesn’t use a wheelchair in his day-to-day life, but uses it masterfully on the court, almost as an extension of his own body. 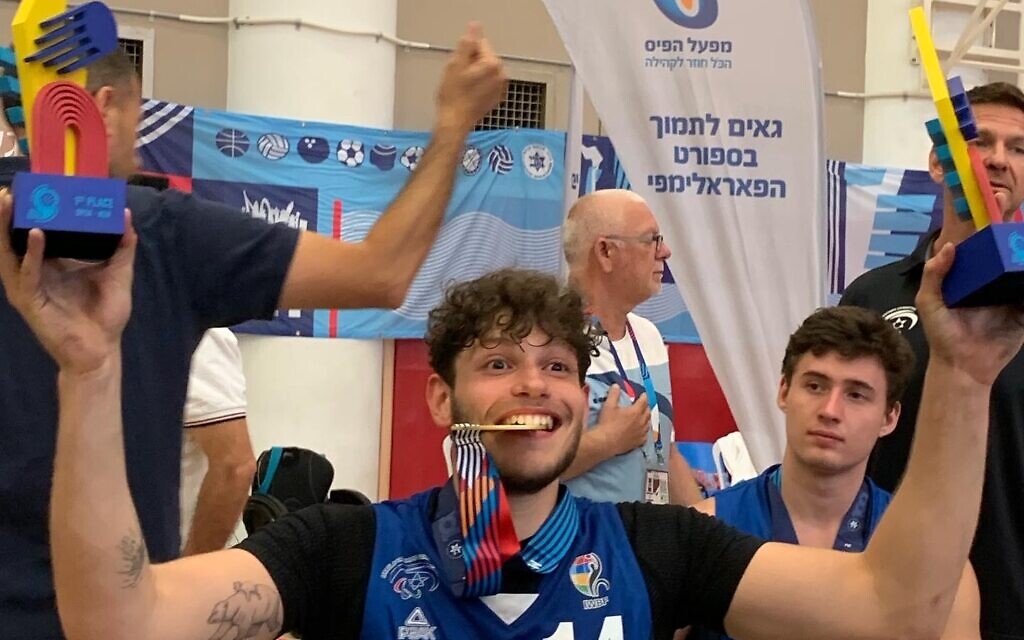 For the past two years, the 20-year-old Vigoda has been playing wheelchair basketball abroad. After playing for a year for the University of Texas at Arlington, he moved to Germany to play for Hannover United.

“Before I got to basketball, in my head I thought that a wheelchair is something that makes you seem more disabled, but for me it became a tool to participate in my sport,” said Vigoda. “Just like a skier needs skis, I need my wheelchair.”