Skip to content
HomeWorldIslamic Jihad says Israel has ‘started a war against our people,’ vows to hit back

The Palestinian Islamic Jihad terror group said Friday afternoon that Israel had “started a war against our people” after the Israeli military said it had carried out strikes as part of an operation targeting the group.

“We collectively must defend ourselves and our people. We will not allow the enemy’s policy of undermining the resistance and our national perseverance,” the group said in a statement.

Islamic Jihad said it was mourning “the great jihadist commander Tayseer Jabari ‘Abu Mahmud,’ who was killed in a Zionist assassination in Gaza City.”

Jabari, the group’s leader in the north of the Strip, was killed in the Israel Defense Forces’ opening salvo.

Hamas, the larger terror group that rules Gaza, and which Israel hopes to keep out of the current round of fighting, said it mourned the deaths of Tayseer Jabari and the group’s other members killed in the strikes. It said that “the blood of our people and the resistance are not shed in vain.”

The so-called “Joint Operations Room” of various Palestinian terror factions in the Strip said Israel bore “full responsibility” for the airstrikes and that they “won’t go unpunished.”

A statement said the groups were assessing the situation and the leaders of the factions would jointly decide on a response.

The military said it assessed that at least 15 PIJ operatives had been killed in the strikes.

Palestinian health officials said at least 10 people had been killed, including a five-year-old girl. 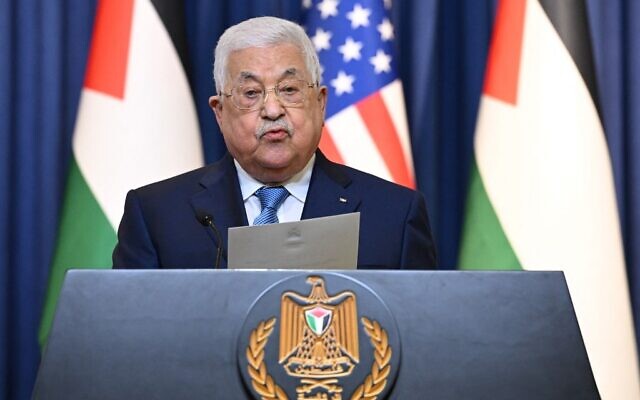 Palestinian Authority President Mahmoud Abbas delivers statements to the media with the US president after their meeting in the city of Bethlehem in the West Bank on July 15, 2022. (MANDEL NGAN / AFP)

“The presidency condemns the Israeli aggression against our people in the Gaza Strip, demands its immediate cessation and holds the occupation forces responsible for this dangerous escalation,” the statement said.

The strikes came four days after Israel closed multiple roads near the border and shuttered the entrances to a number of communities due to fears of an imminent attack by the terror group.

That followed the arrest in the West Bank of the organization’s leader there.

Ahead of launching airstrikes, Defense Minister Benny Gantz told the Gaza group: “Your time is up. The threat will be removed one way or another.”

On Friday afternoon the Israeli military banned large gatherings in communities within 80 kilometers of the Gaza frontier and told residents in the area to stay near bomb shelters. 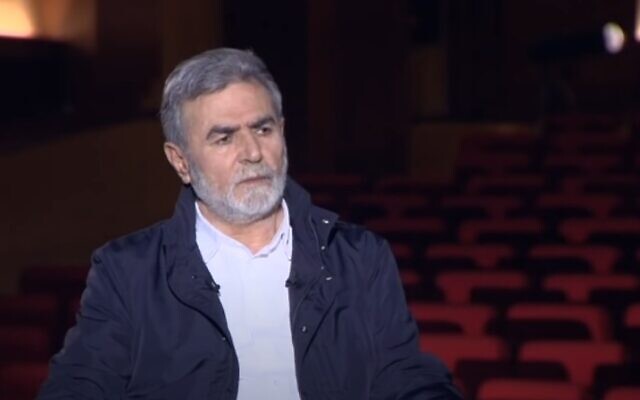 PIJ’s secretary-general Ziad Nakhaleh, who is visiting Iran, vowed that the group was “going into battle” and called on other Palestinian terror groups to join. “There are no ceasefires after an attack,” he said. “This is a test for all parts of the resistance.”

He added that all Israeli towns, including Tel Aviv, are on the terror group’s radar and should be prepared to be targeted.

Israel said that it targeted Islamic Jihad sites only in its initial strikes on Friday afternoon — and that it launched the strikes because Islamic Jihad cells were preparing to fire at Israeli targets.