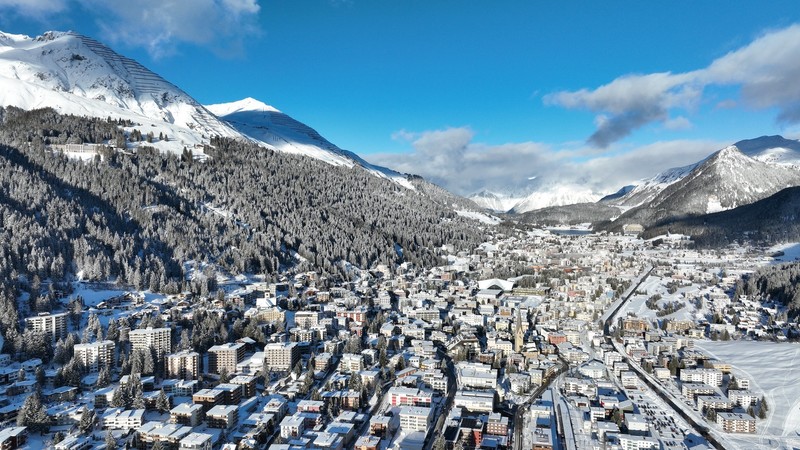 Each year, the World Economic Forum’s Annual Meeting in Davos, Switzerland, generates great interest and debate in global media. The 2023 meeting was no exception.

Back in person in January for the first time since the start of the COVID-19 pandemic, the 53rd Annual Meeting saw several recurring themes in the global media coverage. These ranged from the prevailing sentiment about the state of the global economy to the threat of global fragmentation to how to respond to the climate crisis to the potential for technology and innovation as a force for good.

The Annual Meeting saw a record number of mentions from influential global media on the core topics of debate in Davos and the announcements and updates on key impact initiatives. The coverage largely reflected the importance of cooperation and urgent action to address the main issues facing the world.

Here’s a look at some of the main stories from the meeting.

The economy: from recession fears to cautious optimism

On the cusp of the meeting, the World Economic Forum released its latest Chief Economists Outlook, which painted a bleak picture of the economy. Almost two-thirds of respondents considered a global recession likely in 2023, as high inflation and low growth contribute to reduced investment. This received blanket coverage from the major news outlets. For Reuters it cast a long shadow over the meeting, while the Wall Street Journal suggested the news had put a chill in the Swiss mountain air.

Once the meeting was under way, that sentiment shifted. Gita Gopinath, deputy managing director of the IMF told an audience at Davos that although it would be a tough year ahead “there are signs of resilience”. This, coupled with recent positive economic data from Europe and the US and China’s reopening, saw the Financial Times reporting that the mood was more positive.

‘Polycrisis’: the growing threat of fragmentation

A week before the meeting, the Forum released The Global Risks Report, which outlined the most pressing global issues facing the world, including the cost-living-crisis in the short term and the climate crisis in the long term. Against that insight of complex interconnected threats, “polycrisis” rapidly became a buzzword of the meeting, as the media quickly picked up on the term. Forbes warned that while ‘polycrisis’ might have been overused at the meeting, corporate boards should take note, arguing that they not only look more broadly at global risks, but look at them in a different way.

There was also a spotlight on the Ukraine crisis, as coverage focused on the question of security, the role of NATO, reconstruction, and the food and energy crises that have resulted from the conflict. Modern Diplomacy reported on the further pledges of support to Ukraine that leaders made during the event, as well as the wider security fears that the war is creating.

Many outlets, including France24, covered Ukrainian President Volodymyr Zelenskyy’s livestreamed address to Davos participants, in which he called for the country’s allies to take swifter decisions. His wife, First Lady of Ukraine Olena Zelenska, attended the meeting, using the event to bolster humanitarian support for Ukraine’s people, as outlets including AP reported.

The apparent “lack” of snow at Davos was a headline grabber. Over the course of the week, the media reported on multiple aspects of the climate crisis, reflecting the diversity of sessions. Business Today suggested that the climate crisis had taken center stage at the event, dominating debate thanks to the high-profile speakers and number of issues.

The Washington Post, among other outlets, covered a blistering speech by UN Secretary-General António Guterres, who called on politicians and business leaders to “stop our self-defeating war on nature.” Reuters highlighted the comments of Peter Sands, executive director of the Global Fund to fight AIDS, Tuberculosis and Malaria, who said that climate change is increasing the incidence of malaria and that it was emerging in new places because of warming temperatures. Meanwhile, the Asia News Network focused on the growing trend of climate litigation and the effects this is likely to have on government and business.

Trade was a big topic of coverage at the Annual Meeting, as coverage of the supply chain shocks of the past few years turned to theories about trade’s role in the green transition and addressing the climate crisis.

Many outlets covered European Commission President Ursula von der Leyen’s announcement that under the EU’s Green Deal industrial plan, state aid and a sovereignty fund will be used to retain home-grown talent and make local green industries more competitive, with the aim of making the region a centre for clean technology and innovation. Some media presented this in the negative, as a direct contest to US President Joe Biden’s Inflation Reduction Act, which would subsidize American green industry and manufacturing, while others saw opportunity for new industrial policy and healthy competition to spur the green transition.

The meeting also featured a discussion about globalization, with some media weighing in on whether or not globalization was, as Al Jazeera put it, “dead”. The resounding sentiment was that it wasn’t. France24 reported it wasn’t dead, but instead adapting, while the Financial Times decided that there was still life left in globalization.

Calls for collaboration and innovation: the role of Davos in a changing world

As talk of crises range from Davos at the start of the week, they were soon drowned out by talk of solutions. Global media covered the many calls for unity and cooperation from world leaders, business executives and civil society attending the meeting. Coverage of technological innovation – whether as a means to decarbonize hard-to-abate industries or as an industry-changing tool for increasing access and spurring growth – was largely hopeful and optimistic.

Many covered the launch of the Global Collaboration Village, an immersive purpose-driven metaverse platform, as an example of emerging technology’s potential. At the same time, discussions of frontier tech in AI such as ChatGPT sparked analysis of how breakthrough technologies will change our lives.

And, of course, the Annual Meeting itself was a topic of discussion, as some questioned its relevance in an evolving world. For Forum Founder and Executive Chairman Klaus Schwab, these meetings, where people can talk face to face, are essential. In an interview with TIME, Schwab described Davos as “an immersive experience”. Others agreed that the meeting has value for encouraging collaboration and action on the key issues facing the world.

As one Financial Times columnist conceded, “One always learns something from the World Economic Forum.” Or, as the BBC put it: “However distant a ski resort full of global leaders may sound, WEF is the sort of place where you get a sense as to whether a three-year storm may start to subside.”

A main focus of coverage from Africa was the economy and trade. Arise News (Nigeria) reported on World Trade Organization Director General Ngozi Okonjo-Iweala calling for trade to be “digital, green and inclusive.” SABC Africa (South Africa) presented an overview of the key focus of the meeting, while Newzroom Africa reported how the meeting highlighted the vulnerability of African economies in the face of global risks.

Responding to the climate crisis and identifying areas of cooperation were big stories for ASEAN media covering the meeting. The Jakarta Post featured the Forum partnering with the Indonesian government to unlock the potential of blue carbon. The Financial Times covered Philippines President Ferdinand Marcos Jr’s approach to working with businesses. In the Republic of Korea, media reported on President Yoon Suk Yeol calling for strengthening the resilience of global supply chains and meeting South Korea’s net-zero targets.

A main topic of coverage in China was the special address by Vice-Premier Liu He. Many outlets reported on his address, which served to declare his country open following the pandemic and welcome foreign investment. Others picked up on his call for the world to “abandon the Cold War mentality” and instead “join hands to respond to global challenges” and preserve an “equitable international economic order”. Also on the topic of collaboration, the South China Morning Post ran a piece about comments that von der Leyen made about the need to “work and trade with China”.

Recent months have seen the energy crisis dominate headlines in Europe, and the week of the Annual Meeting was no exception, as the conversations in Davos spilled over to ongoing debates on how to address the urgent interconnected energy and economic crises while accelerating the energy transition. Some covered the mood of optimism on display in Davos and the potential for collaboration against the backdrop of polarization.

Much coverage also focused on German Chancellor Olaf Scholz, who delivered an upbeat message, announcing that his country’s economy was back after suffering a huge energy-related shock, as well as von der Leyen’s address on the economy and green transition, and Zelenskyy’s appeal for sending urgent aid to Ukraine.

Many Indian publications, including The Hindu, featured the “significant” Indian presence at the event, which CNBC-TV18 suggested would “solidify its [India’s] position as a strong, resilient economy.” Business Today picked up Bharti Enterprises Founder and Chairman Sunil Mittal’s comments that India was benefiting, particularly in electronics, from “brewing tensions between the US and China”, while a number of outlets – including the Hindustan Times – ran stories on the announcement made by Klaus Schwab that India was one of the few bright spots in the global economy.

Coverage in Japan focused on the Japan Governor Haruhiko Kuroda’s comments about interest rates, as well as the economic outlook more broadly. There was also much broader regional coverage about how Japan and neighboring countries could prepare to face the risks discussed during the meeting, notably security concerns, the climate crisis and rising inflation.

The economy also took central stage in Latin American media, as did the debate on the future of globalization and the potential for regional and global cooperation. Media also covered the remarks of political leaders from the region, including Presidents of Costa Rica, Colombia, Ecuador; the Vice President of the Dominican Republic and Brazil’s Minister of Finance and Minister of the Environment and Climate Change.

Coverage in the Middle East and North Africa, which hosted COP-27 in Egypt last fall and will host COP-28 in the UAE this year, zeroed in on the environment, in addition to broader economic stories. For example, media covered Guterres’s remarks about the urgency for climate action, the pressing food crises facing much of the globe and importance for increasing investment in climate protection.

The climate crisis also dominated conversations in media in the US and Canada, alongside coverage of the economy and the future of jobs. The Wall Street Journal, among others, covered the threat of the fragmenting global economy, while Bloomberg, Business Insider and others highlighted the climate solutions and climate activism on display in Davos.

For more reading on the Annual Meeting 2023, find a summary of the top five things to know here. And discover the full list of meeting impacts here.