Months of heavy congestion and an overall sense of chaos at Ben Gurion Airport seemed to worsen on Wednesday, with long lines reaching outside the airport and attempts to ease the crowding by using a secondary terminal failing to address the thing needed most — more staff.

Scenes of chaos at Israel’s main international airport have become the new normal over the past few months.

Pictures published on social media on Wednesday showed long lines of travelers stretching outside the airport.

In an attempt to ease the congestion at the main terminal building (Terminal 3), the Israel Airports Authority diverted some international flights to Terminal 1, which only seemed to create further disorder as the congestion spread, according to a report by Channel 12.

The airport authority has said the situation is not expected to change until next year, with travelers advised to arrive four hours ahead of their flights instead of two to three hours as is usually recommended.

Scenes of chaos and long lines at the airport have become more frequent since March, when Israel eased most COVID-related travel restrictions. The situation became worse during the Jewish holiday of Passover, which saw an estimated 75,000 passengers go through the airport in a single day.

According to Ofer Lapler, spokesman for the Israel Airports Authority, there has been a 340 percent increase in passengers and flights at Ben Gurion Airport since March.

The unusual situation is the result of increased international flights combined with a shortage of workers, as many airport employees still haven’t returned to work following the pandemic.

Lapler said Sunday the airfield was dealing with a shortfall of 1,400 workers and advised passengers to “come with patience” when flying out of the country.

He urged travelers to bring only carry-on bags, rather than larger pieces of luggage that need to be checked in.

Customers of El Al have also faced a slew of flight cancellations as pilots strike to demand that the company return their salaries to pre-COVID levels. 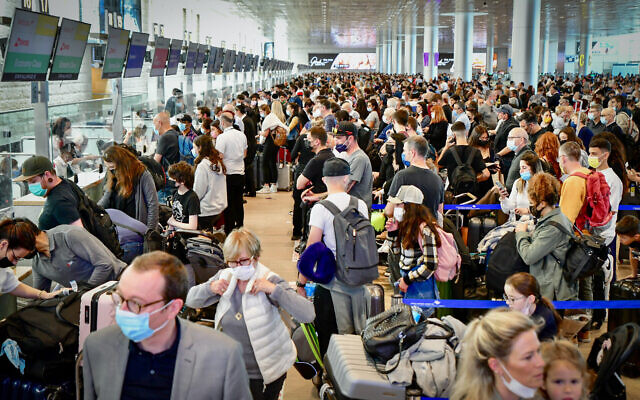 Departing travelers at Ben Gurion Airport ahead of the Jewish holiday of Passover, April 14, 2022. (Avshalom Sassoni/FLASH90)

Ben Gurion Airport, meanwhile, has stepped up efforts to recruit more staff, with Lapler saying it was “a great place to work.”

An official at the airport warned the situation could get worse during the summer season unless significantly more workers are recruited soon.

“We’ve been trying to recruit people by offering various benefits,” the unnamed official was quoted by Channel 12 news as saying, adding that there are employees currently in training.

The official noted, however, that “generally speaking, people aren’t showing too much enthusiasm… most of them aren’t interested in working.” 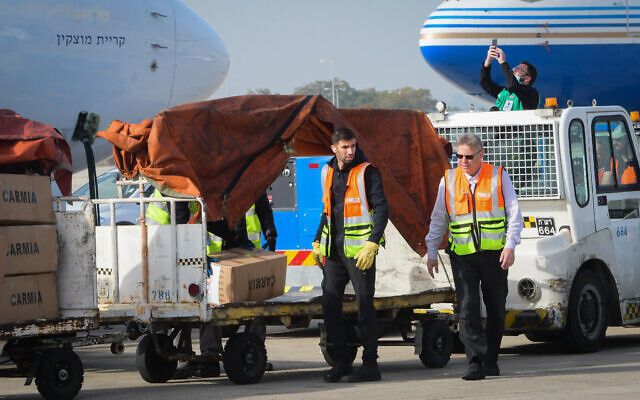 Lapler has noted that there have been staffing problems at airports and airlines in numerous countries, saying that Israel was in fact in an “excellent position.”

NBC News recently reported that 6,500 flights were canceled in the United States on Thursday and Friday last week, with nearly 12,000 flights delayed. US Transportation Secretary Pete Buttigieg has called on travel industry leaders to find solutions to the disruption, with concerns of mass cancellations for the July 4 weekend.

Michael Horovitz contributed to this report.