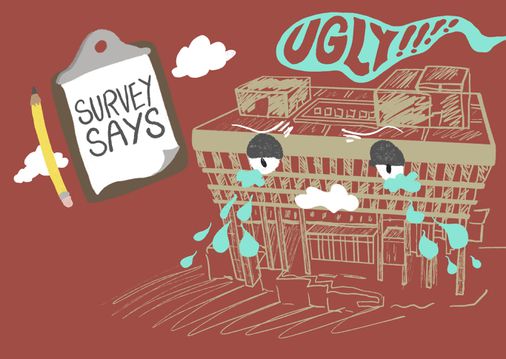 Welcome back to Survey Says, in which we share some of the random, absurd, and occasionally useful polls from the world of travel.

This one really hits hard. An analysis of Tweets about prominent international buildings found that Boston City Hall is the fourth most divisive building in the world, with 25 percent of Twitter users deeming it ugly. There are a few things wrong here, so let’s break it down.

Who has time in their day to argue about the aesthetics of a building on Twitter? Why are people still debating the merits of Boston City Hall’s architecture 55 years after it opened? Let it go, people. Finally, Boston City Hall is a Brutalist masterpiece that is just misunderstood. Still, City Hall was declared the fourth most despised building in the world. In the United States, it’s regarded as the second ugliest. Sigh.

The ugliest building in the world (according to the study by a British home improvement store) is the Scottish Parliament Building, which, from above, resembles a group of insects mating. In the United States, the ugliest building is yet another Brutalist structure, the J. Edgar Hoover Building in Washington, D.C.

Let’s look at a survey that’s kinder to Boston. A lawn care company (!) analyzed the best cities for bagel lovers. I don’t understand the correlation between lawn care and bagels, but let’s go with it anyway. The study found that Boston is the third-best city in the country for lovers of the doughy, circular treats, which serve as a fantastic conduit for carbs and cream cheese. The company, called Lawn Love, looked at factors such as bagel vendors per square mile and the average number of reviews per bagel shop.

More good news about Boston. It’s rated number 10 in a survey of the top 10 cities for music lovers, beating Paris and Melbourne. Take that, Paris! The study by iVisa looked at variables such as the number of famous musicians born in a city, how often major artists visited it on world tours, the number of times a city was referenced in popular songs, and cities with the best music venues.

What’s that, you crave more unnecessary facts about Boston? A study from Insure My Trip found that residents of Massachusetts, Connecticut, and Rhode Island are dreaming about going to Barcelona in 2023. Vermonters are craving Montreal, and, wait for it, Maine and New Hampshire residents are dreaming about a trip to Boston. Perhaps folks from Maine and New Hampshire appreciate bagels and fine Brutalist architecture?

And, one more factoid to thrill your parents and bore your friends at your next party: Boston was rated number six on a list of the top 12 fishing cities in the country by an online guide for fishing locations. I’d approach this survey carefully. The website refers to Boston as Beantown and the Hub of the Universe. Those are nicknames for Boston used by people who have never been to Boston and likely know nothing about our city hall, bagel, and music superiority.