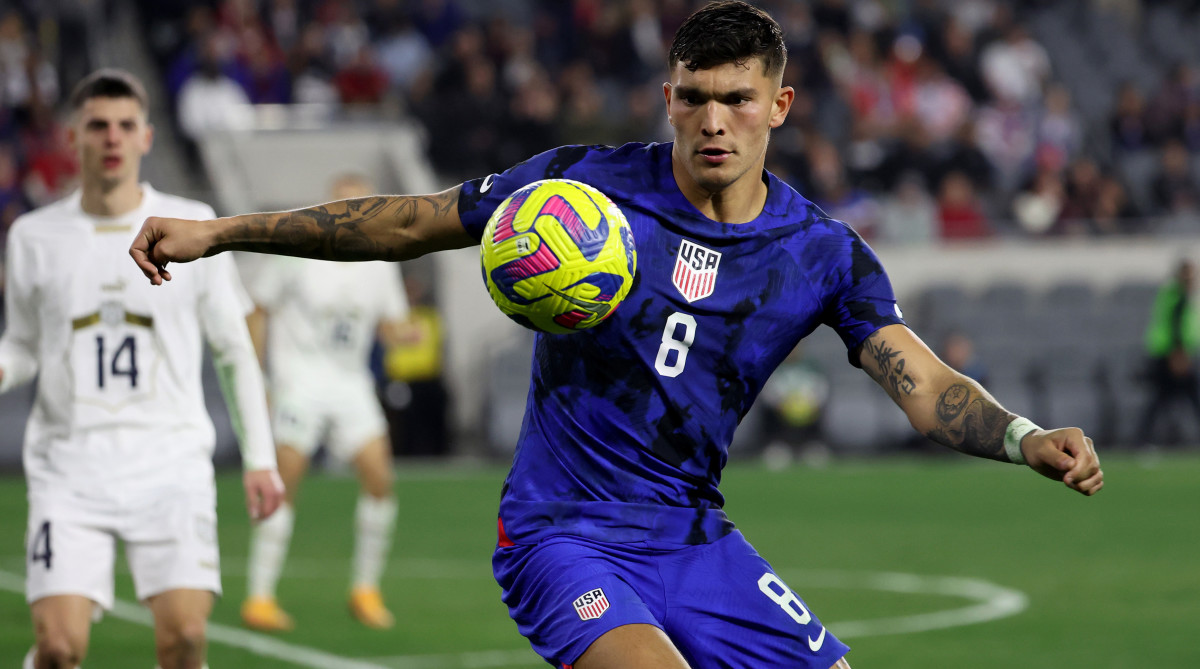 LOS ANGELES (AP) — Brandon Vazquez scored to lead a U.S. lineup with seven starters making their international debuts, but the Americans lost 2-1 to Serbia on Wednesday night in their first match since the World Cup.

Veljko Simic scored the go-ahead goal in the opening minute of the second half for Serbia, which gave debuts to 14 players. Eight Americans in all debuted during a lively friendly that felt like spring training at BMO Stadium near downtown Los Angeles.

The American team is in transition with interim head coach Anthony Hudson running the show while U.S. Soccer Federation determines the future of coach Gregg Berhalter, whose contract expired at the end of last year. Hudson is using the team’s annual January camp and the accompanying exhibitions to give experience to a new crop of prospects after the U.S. was eliminated in the round of 16 at the World Cup in Qatar.

The U.S. uses youngsters and MLS players in its winter camp, which falls outside a FIFA international window. The current group has 11 players getting their first callup and just five members of the World Cup roster.

Hudson’s inexperienced group put on an exciting performance with much more action and attacking flair than normal in these annual January exhibitions, but the U.S. team has won just one of its last eight matches, with four draws and three losses.

The U.S. hosts Colombia on Saturday.

Luka Ilic scored late in the first half for Serbia, which fielded a starting lineup with eight debuting players and just 15 combined international appearances. LA Galaxy forward Dejan Joveljic led a group featuring none of the starters from the team’s last World Cup match against Switzerland.

Goalkeeper Gabriel Slonina was among the most U.S. starters making debuts since nine against Guatemala on Jan. 10, 1988. Slonina at 18 years, 8 months, 8 days became the youngest U.S. goalkeeper, breaking a mark that Tony Meola set at 19 years, 3 months, 18 days against Ecuador on June 7, 1988.

U.S. captain Walker Zimmerman made his 38th international appearance, while the other 21 players on the field combined to start the game had only 28 combined games of international experience. Paul Arriola came on late as a substitute after being dropped late from the U.S. World Cup roster.

The U.S. went ahead when Vazquez rose to head home a beautiful cross from Gressel, his former teammate. Vazquez, a San Diego native who could play for the U.S. or Mexico, became the 59th player to score in his U.S. debut.

Vazquez scored 18 goals for Cincinnati last season, tied for the most by an American in Major League Soccer. Berhalter claimed the U.S. didn’t have time to integrate him into its roster before the World Cup.

Gressel, a 29-year-old German fullback who gained U.S. citizenship last year, became the oldest player to make his first appearance for the American team since Chris Pontius in January 2017.

Slonina, a Chelsea prospect from Chicagoland, made a handful of spectacular saves.

But after Ilic evened it for Serbia on a short free kick in the 43rd minute, Simic capitalized on a turnover by Neal to put Serbia ahead in the 46th.

San Jose forward Cade Cowell played an impressive game down the left side in his second U.S. appearance. The 19-year-old rang two shots off the posts in the second half along with a third impressive strike that went just wide.

Alejandro Zendejas made his U.S. senior team debut after spending the previous six years as a Mexican international. The Club América forward, a teammate of Christian Pulisic on the 2015 Under-17 team, rejoined the U.S. program but still hasn’t decided where he’ll play in the long term.