Skip to content
HomeNewsYou be the judge: should my partner improve his table manners? 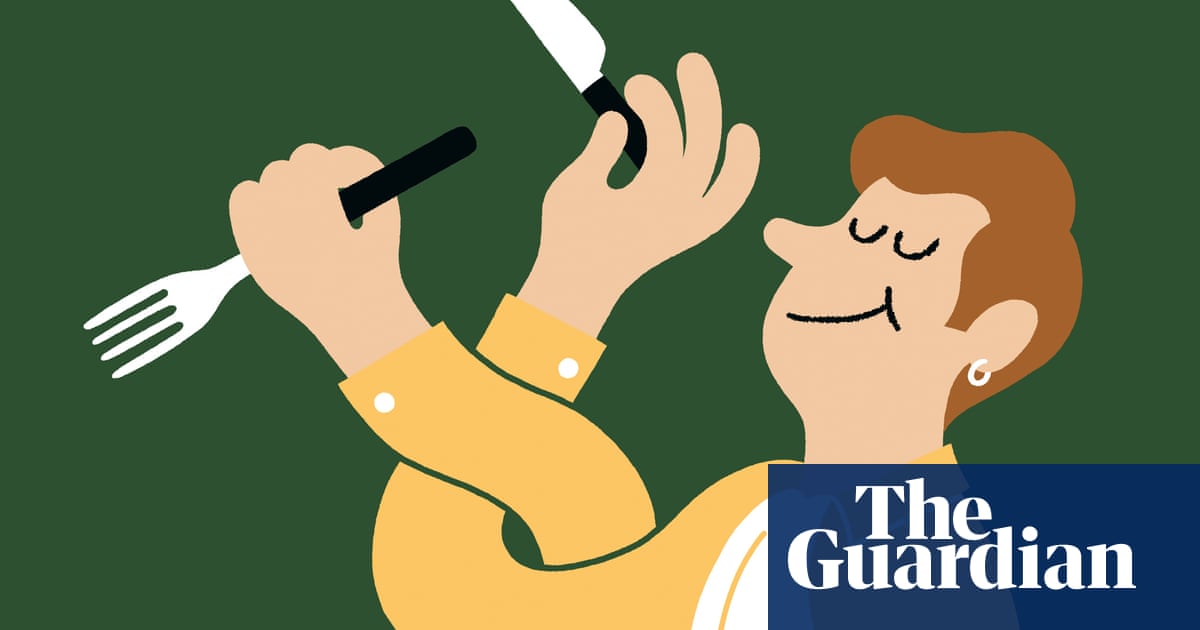 I’ve been with Benji for four years, and we’ve lived together for two. Ever since I’ve known him, he’s always eaten with his knife and fork the wrong way around.

I’m not a stickler for perfect etiquette, but there’s something about watching him cut a piece of meat with a big knife in his left hand, and eating it with his right that just bugs me. He also holds his fork in a funny way: he sort of points it up to the sky with his hand, which is balled up like a fist. It brings to mind an image I studied as a child of a group of men at some sort of 16th-century banquet. Sometimes I jokingly call him Henry VIII.

It’s just the way he clutches his fork. It’s so intense. I was raised to never direct your fork anywhere but to your plate, and to hold it pointing downward, with your index finger on the back. When I tell Benji this, he laughs it off and says I’m overthinking. He also scoops his food on to his fork, rather than spear his food with it.

At a wedding, he used a soup spoon for cutting a piece of fish

Once, at a dinner party, a friend of mine said: “Oh, doesn’t Benji hold his cutlery in a funny way?” Obviously I had to agree. I brought up the Henry VIII nickname and I think he got a little embarrassed. I apologised later when the guests had gone home.

Benji also isn’t very good with following the order of cutlery in formal settings. Once at a wedding he used a soup spoon for cutting a piece of fish. Another time he placed a napkin in his neck-tie to use as a bib. I said to him, “You can’t do that, it looks childish.”

I also told him, at a formal dinner, cutlery is placed in the order it will be used, starting from the outside. He said rules were not as important as enjoying the food.

I love Benji but he needs to brush up on table etiquette. We’re in our late 20s and starting to attend more weddings. I don’t want to be embarrassed to sit around a table with him.

Helena is being snobby; table manners vary around the world and we all have our little quirks

I don’t think my table manners are that bad. In fact, I think they’re pretty normal. There is no right way to hold a knife and fork: it simply depends on where you’re from and what you’re used to.

In America, they’ll put their fork in the left hand and knife in the right when they cut their food. Then, to eat, they place the knife down and switch the fork to the right hand to eat. In Europe they don’t do that. I have said this to Helena and she goes, “But you’re not American!” Alas, this is true. But it shows that the way you hold cutlery is cultural.

Helena imposing the British way on me is, in my opinion, snobby (even though I am British). She should be more open-minded. Helena also says I hold my fork like Henry VIII and that it looks “uncouth”. I had to research what she meant, and discovered that the European way is to point the fork down and spear the food. I never took to eating this way.

I don’t remember my parents ever teaching me that and it certainly doesn’t come naturally to me. I prefer to use the fork a bit like a spoon and scoop food on to it. Sometimes, I even cut my food with the side of my fork, which drives Helena crazy.

The manners and etiquette police are very boring. They exist to keep us in little boxes

The time we had a dinner party and Helena jumped onboard with her friend was a bit annoying. We all have our little quirks, and I could have done without everyone poking fun at me. Helena says she isn’t into etiquette, but she knows so much about it I have to disagree. She has even shown me a few table manners videos on YouTube.

At a couple of weddings she pointed out I shouldn’t tuck my napkin into my neck but I only did it as a joke as I’d had a few beers. She was embarrassed but I thought it was funny.

I think Helena needs to take a chill pill. She isn’t perfect on this front either – although she may deny it, she’s been known to belch at the table on more than one occasion. And I always let that slide. The manners and etiquette police are very boring. They exist to keep us in little boxes – and I want to break free.

The jury of Guardian readers

Should Benji make an effort to follow convention at the dining table?

Benji is innocent – his table manners sound fine and Helena’s attitude towards him holding his cutlery the “wrong” way round sounds a bit antiquated. I’d understand her point if he were eating with his mouth open, so until that happens, carry on Benji.
Jonny, 30

Table manners are important, but Helena’s approach is unhelpful. If Benji feels defensive enough to cry “freedom” or joke about the issue – it’s indicative of a wider relationship problem.
Amy, 37

If Benji were going to a banquet with the Queen this might matter slightly, but in ordinary life there are plenty of ways to use cutlery. Left-handed people might switch them round, and it’s perfectly acceptable to scoop food with a fork. Helena needs to lighten up.
Elaine, 56

Helena should stop trying to change Benji and pressuring him to act the same way she does. Surely all that matters is that he’s good company.
Kirsty, 28

Helena’s rules are rooted in an outdated class system where form and posture were more important than kindness and happiness. While Benji’s technique could be refined, it is Helena who displays bad manners by calling him out in public. (Benji should be careful about mentioning Helena’s belching though.)
Joseph, 27

You be the judge

So now you can be the judge. In our online poll, below, tell us: should Benji improves his table manners?

We’ll share the results on next week’s You be the judge.

The poll will close on Thursday 25 August at 9am BST

We asked whether Linda should chill out about her daughters’ water fights with her husband, Roy.