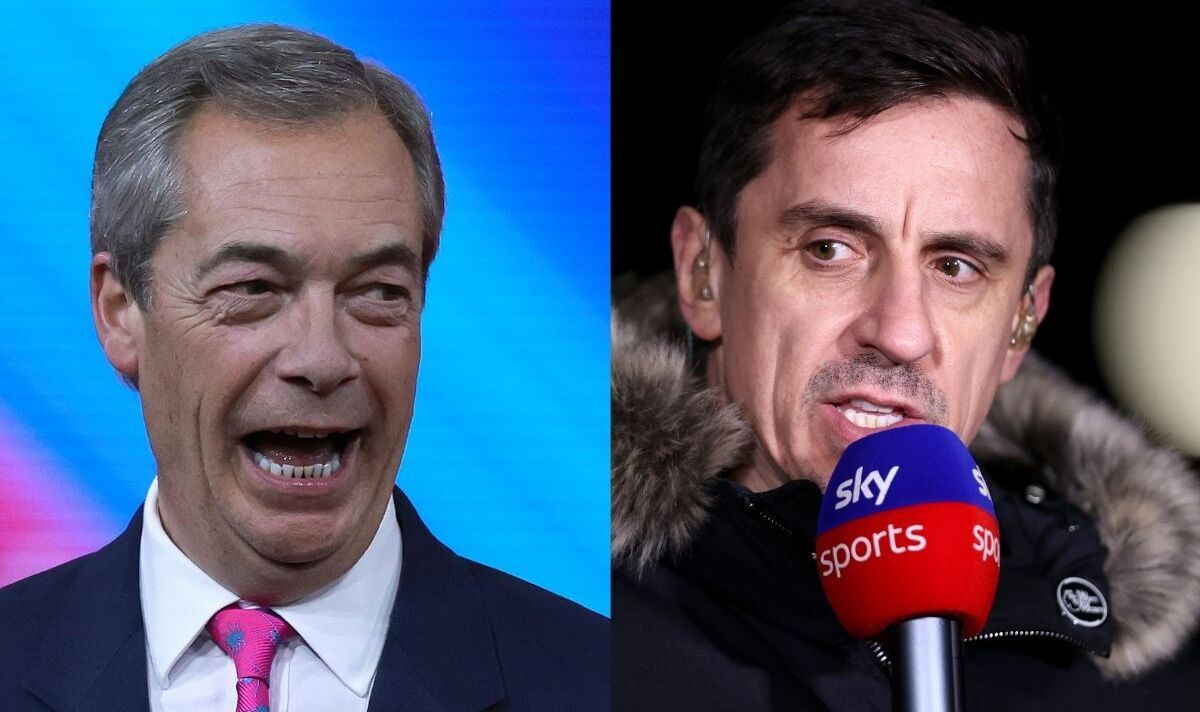 Advertising his 7pm slot on GB News, former UKIP leader Nigel Farage posted a video on Twitter travelling around the Channel pointing out migrant boats. The video has been widely rebuked as tasteless and even “dangerous”, but Mr Farage’s fans have been quick to bite back. Speaking from the boat, Mr Farage said: “You can see a French Naval Vessel escorting a dinghy with about 40 on board.

“That French Naval Vessel has escorted it for about a quarter of a mile off the French coast and there are spottings of boats all over the place in the channel.”

The Ministry of Defence (MoD) said 254 migrants were detected in seven small boats on Sunday. More people thought to be migrants have been spotted being brought into Dover on Bank Holiday Monday.

The renewed spike in illegal crossings comes after an apparent 11-day pause.

Football pundit Gary Neville blasted Mr Farage’s video, tweeting: “I can’t believe this f@@@@@g idiot has been prominent in politics in this country for the last few years.

“He’s divisive , dangerous and a disgrace to the UK.”

Mr Farage added in the video: “The French Naval Vessel is now a long way inside English waters.

“All he does is point and shout.

“No answers. No nuance. No solutions to the problem.”

However, fans fought back, criticising Mr Neville for stepping into the political ring as a football pundit while defending Mr Farage’s actions.

@InvictaRegina00 responded: “Least he gets out there and actually looks at what is really going on, instead of hiding behind the walls of a huge mansion sending pontificating tweets.”

@Malcolm_Sillick added: “I often agree with you Gary, but you are way out here.

“Nigel Farage is as good or better than anyone else in UK politics and would make a million times better Prime Minister than Keir Starmer ever would.

“He is spot on about these economic migrants.”

Several other commenters told Mr Neville, who has recently joined the Labour Party, to “stick to football”.

Mr Neville has said that the thought of a political career had occurred to him, but felt he would “get eaten alive”.

He added: “I don’t know what Whitehall’s like, what Westminster’s like, I can only imagine what you have to do there to survive and I don’t play the game.”

The MoD took over migrant operations in April when the Government announced controversial plans to send some of the individuals making the journey to Rwanda.

The Rwanda deal means the east African nation can receive asylum seekers deemed by the UK to be inadmissible as they arrived “illegally” under new immigration rules.

These rules are already facing legal challenges and have faced criticism across the political spectrum.

It had initially been thought the 11-day pause in crossings was due to the Rwanda plan acting as a deterrent.

But the flurry of crossings over the weekend suggests the pause was more likely due to adverse weather conditions.

Breaks in crossings happen often and usually coincide with bad weather which makes the crossings ever more dangerous than they are normally.

Commenting on the crossings, a Government spokesperson said: “The rise in dangerous Channel crossings is unacceptable.

“Not only are they an overt abuse of our immigration laws but they also impact on the UK taxpayer, risk lives and our ability to help refugees come to the UK via safe and legal routes.”