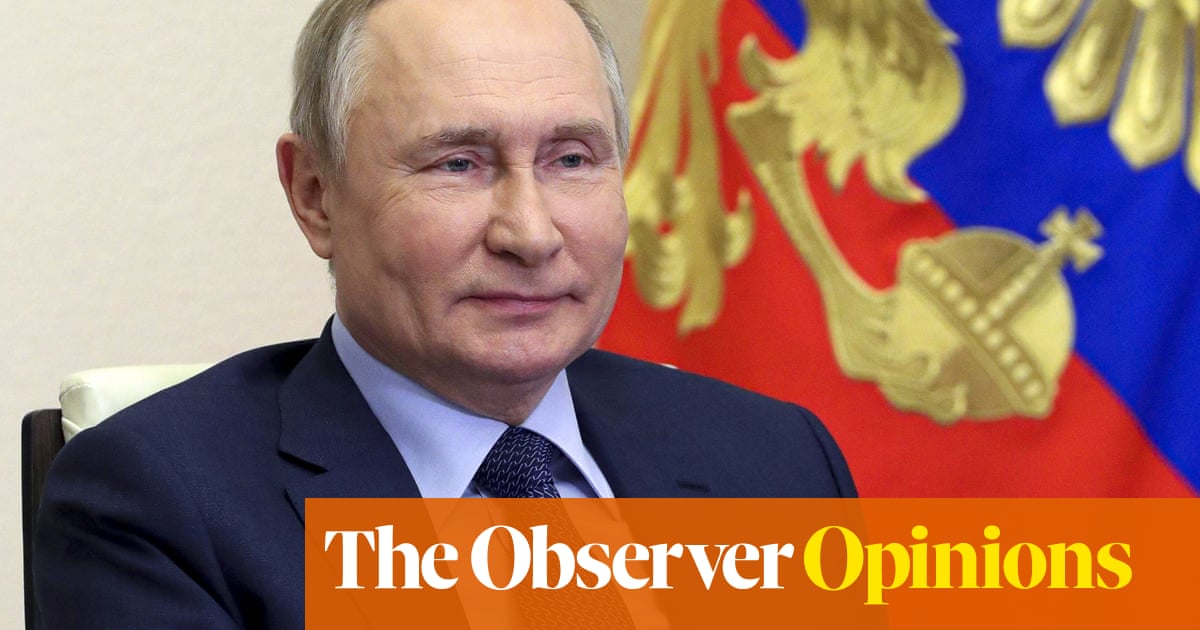 Openly acknowledged or not, regime change in Moscow – meaning the overthrow of Vladimir Putin – must be the western democracies’ ultimate objective as they help to thwart his conquest of Ukraine. Pursuing imperial fantasies, a tsar-like Putin has gone too far this time. Now he’s got to go. Urgently required: a new Russian revolution to topple the tyrant, led from within and assisted from without.

The idea of Putin remaining in power, even if a Ukraine settlement is eventually patched together, is both impractical and obscene. By his inhuman actions, Russia’s dictator has placed himself beyond the pale. He’s a menace to universal order, an affront to common decency. He simply cannot be trusted.

Despite resounding international condemnation, the damaging impact of western sanctions on Russia’s people, the resulting threat to global food and energy supplies, and daily evidence that his ill-led armed forces are in deep trouble, Putin appears determined to fight on, even to escalate. Last week’s disappointing Nato summit will have done little to dissuade him.

US president Joe Biden warns this blind fanaticism could bring on a death struggle, leading to Russian use of chemical, biological or even battlefield nuclear weapons. The Kremlin does not rule it out. Such crude blackmail is no basis for any kind of sane relationship.

Washington has now formally accused Russia of war crimes, for which Putin bears command responsibility, and vowed to bring him to justice. The UN’s highest court has ordered him to stop. Biden deems him a “war criminal” and a “pure thug”. Who, in their hearts, honestly disagrees? Even his Chinese chums look askance.

For as long as he holds power, Putin will pose a potentially existential threat to the security of Europe and the wider world. His contempt for human life, rights, international law and the UN charter disqualify him from any future leadership role. For who can doubt the Ukraine war would halt if he were unseated? There will be no peace while Putin’s around. He’s unfit. He’s an outlaw. He’s a second Bashar al-Assad. He must fall.

Logically, practically and morally speaking, the US and its allies have no alternative but to actively seek his overthrow. They cannot directly intervene in Russia. But they can and should make it plain to Russia’s elites and wider public that Putin is a liability, a deadweight and a danger, primarily to them – and that the west will back them if they move against him. People often say revolution will never happen. But they said that about Nicolae Ceaușescu, Erich Honecker, Hosni Mubarak, Ferdinand Marcos, Anastasio Somoza,the Shah of Iran – and Tsar Nicholas II. So maybe they’re wrong about Putin too.

The longer the war, the higher the casualties and costs, the more public anger may be directed at Putin. The west should increase the pressure and facilitate his demolition through tighter, deeper sanctions (including, crucially, on energy exports), offensive military aid to Kyiv and expanded broadcast and social media information campaigns inside Russia.

Any future leader seems most likely to come from within the Kremlin apparatus. A transitional figure could emerge in much the same way as did Putin himself in the dying days of Boris Yeltsin’s presidency. At the other end of the opposition spectrum, the always defiant Alexei Navalny is a potent rallying force.

The toppling of Putin may prove a long-term aspiration or could happen very quickly. Historically, change in Russia often occurs abruptly. The hope would be for a subsequent move to free, democratic elections. Yet what happens ultimately depends on Russians themselves.

To maximise the chances of success, the western powers should consider all overt and covert methods of encouraging new leadership, including political incentives, security guarantees and perhaps even a “money back” scheme for repentant oligarchs. If appeals to principle do not work, appeals to self-interest may.

EU and Nato members must agree, too, that Putin is not someone they can ever do business with again. Let’s hope France and Germany get the message. Liz Truss, Britain’s foreign secretary, is concerned they may let Putin off the hook by offering a revised, Minsk-type compromise over the Ukrainians’ heads, similar to their failed Crimea initiative.

Meanwhile, backsliding, fence-sitting, ostensibly pro-western governments in Israel, India, Turkey, Saudi Arabia and the UAE that refuse to sanction Russia, must be firmly reminded who their real friends are – and how their interests are best served.

It’s not by sucking up to a war criminal. It’s not by rationalising or minimising an unprovoked war of aggression against a sovereign democracy. It’s by doing all they can to help Russians and their friends in the west bring Putin’s murderous reign to an end. As Bolshevik revolutionaries once cried, so must Russia’s people cry again: “Peace! Land! Bread!”