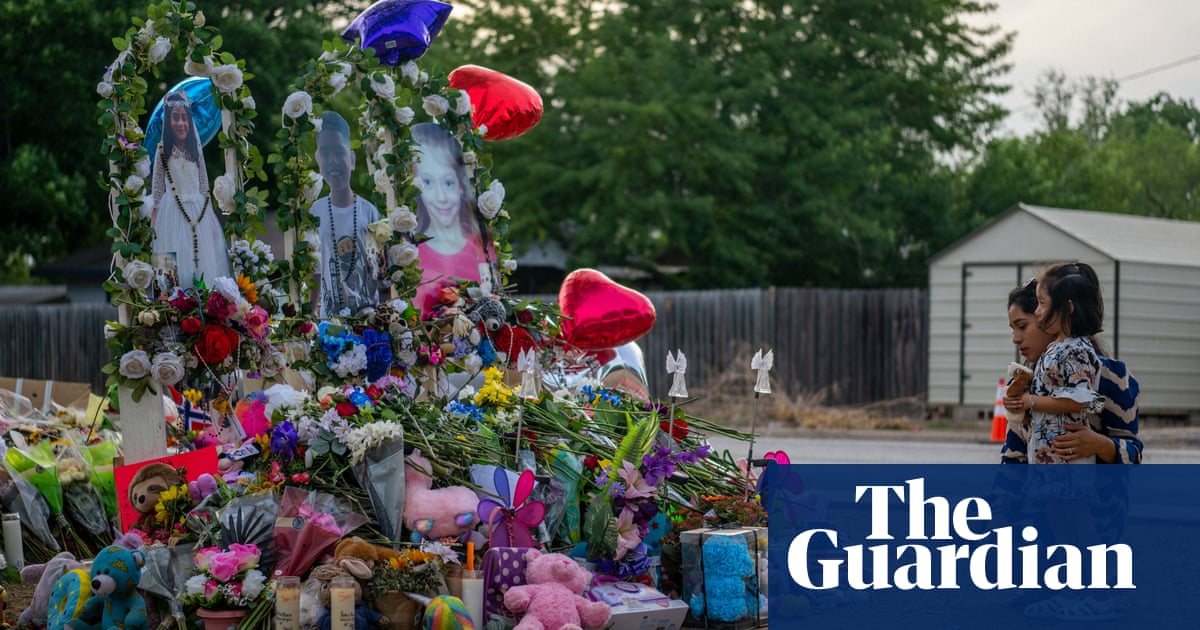 The school district police chief who served as on-site commander during the mass shooting in Uvalde, Texas, has said he is talking daily with investigators, contradicting claims from state law enforcement that he has stopped cooperating.

In a brief interview, Pete Arredondo told CNN he was speaking regularly with Texas state investigators.

“I’ve been on the phone with them every day,” Arredondo said.

The chief has been the focus of anger over allegations he delayed sending officers into the school on 24 May, believing the shooting had become a hostage situation.

Nineteen children and two teachers died in the attack at Robb elementary school, the deadliest school shooting in nearly a decade. Funerals began this week. On Wednesday the US education secretary, Miguel Cardona, attended services for the teacher Irma Garcia and her husband, Joe Garcia, who died of a heart attack two days after the shooting.

The district announced that students and staff would not return to the Robb school campus, though plans were being finalized on where the fewer than 600 students would attend classes in the fall.

A Texas state senator, Roland Gutierrez, said his office was working with state and federal agencies to request upwards of $45m in federal funding.

According to the US Department of Education, its School Emergency Response to Violence, known as Project Serv, “funds short-term education-related services” to help educational facilities “recover from a violent or traumatic event in which the learning environment has been disrupted”.

Gutierrez said he was unaware of plans to tear down Robb elementary but funds obtained by other schools have been used to rebuild.

State officials have said police waited for more than an hour outside the classroom where the gunman opened fire, despite children repeatedly calling 911 for help. At one point there were as many as 19 officers in the hallway, said Steven McCraw, the head of the Texas department of public safety.

The Uvalde mayor, Don McLaughlin, told reporters he arrived at the funeral home across the street from the school about 15 minutes after “the first call” that the gunman had crashed a truck nearby. McLaughlin said he was standing near an official he identified as “the negotiator”. He said that person unsuccessfully tried to reach the gunman via cellphone.

“His main goal was to try to get this person on the phone,” McLaughlin said. “They tried every number they could find.”

Travis Considine, chief communications officer for the Texas department of public safety, said Arredondo had not responded to DPS requests for two days, while other officers in the Uvalde city and schools police departments sat for interviews and provide statements.

The Combined Law Enforcement Association of Texas, which represents police officers, has urged members to cooperate with “all government investigations” and endorsed a federal investigation.

The confusing information released in the week since the shooting continued on Tuesday with the revelation that the door used by the gunman was not left propped open by a teacher, as police said.

They have now determined that the teacher, who has not been identified, propped the door open with a rock but closed it when she realized there was a shooter on campus, Considine said. But the door, designed to lock when shut, did not lock.

On Wednesday, the Texas governor, Greg Abbott, ordered the state to conduct in-person security audits, including random, unannounced “intruder detection” visits to campuses “to find weak points and how quickly they can penetrate buildings without being stopped”.

“This will improve accountability and ensure school districts are following the plans they create,” Abbott said in a letter to the head of the Texas School Safety Center at Texas State University. Texas has more than 1,200 school districts.

Abbott also asked lawmakers to make recommendations on “school safety, mental health, social media, police training, firearm safety and more”. The next Texas legislative session is scheduled for January 2023, though some lawmakers have urged Abbott to call a special session.

After the 2018 shooting at Santa Fe, lawmakers approved $100m for schools to improve campus safety with metal detectors, vehicle barriers, alarms systems and other safety measures. They also allowed more teachers to carry guns on campus and be trained in campus shooter response.

But Abbott and state lawmakers resisted calls for stricter gun ownership measures. In 2021, Abbott signed a measure that allows people 21 and older to carry handguns without a license or training.