Skip to content
HomeNews‘Unacceptable!’ Biden under fire as thousands face Thanksgiving foodbank misery in the US 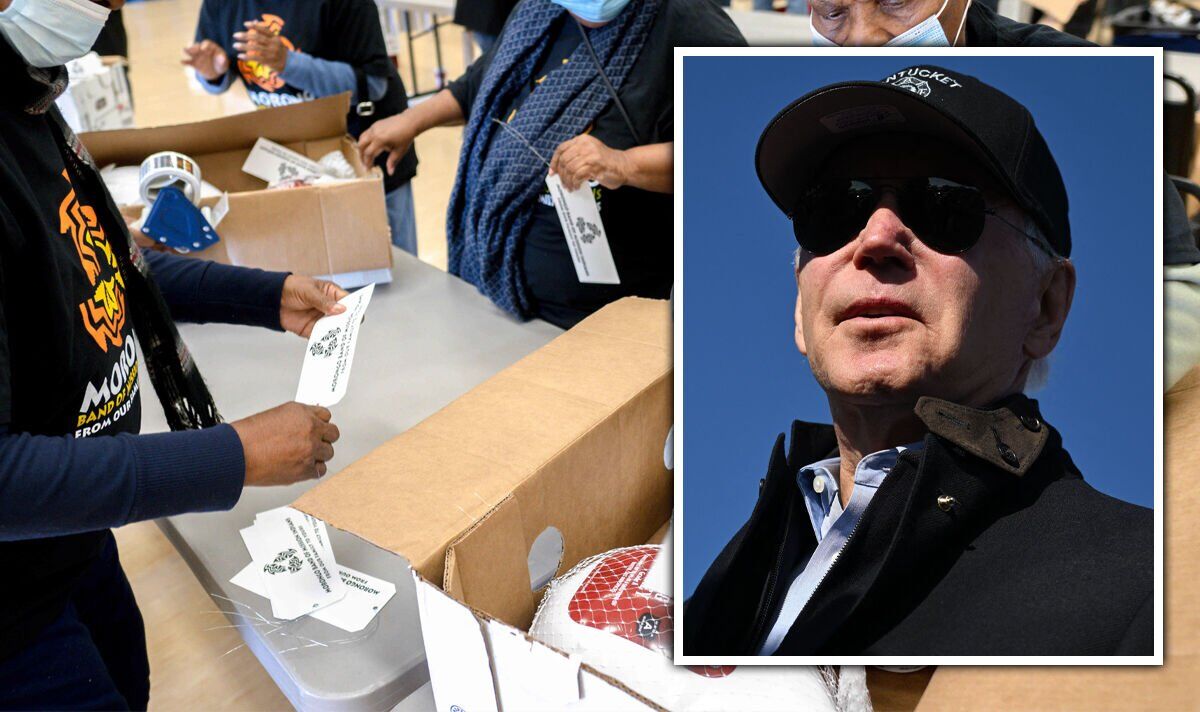 Joe Biden has been blasted as spiralling inflation threatens Thanksgiving plans for families across the US – with hundreds of thousands visiting food banks to make ends meet. Turkey prices have shot through the roof, with the average cost of dinner to a family-of-four now reaching $258 (£213) – $55 more than in 2021. Food banks have told Express.co.uk of efforts to batch buy key ingredients to deal with surging demand, while one unemployed mother-of-one, Rebecca Raymond, has revealed plans to scale back her meal.

This has led to attacks from Republicans who lay the blame on Democratic economic policy, arguing it pushes up inflation.

“So much for Biden’s ‘Inflation Reduction Act’.”

Debbie Lesko, for Arizona’s 8th District, added: “It is unacceptable that over 40 percent of Americans expect to cut some side dishes altogether this Thanksgiving.

Larry Bucshon, Indiana’s 8th congressional district, blasted: “Under the Biden Administration, we have experienced some of the highest priced holidays on record due to the increased cost of living.

“This Thanksgiving is no different – Hoosiers continue to pay more for just about everything.”

David May, from the Los Angeles Regional Food Bank, told Express.co.uk the organisation feeds around 800,000 a month – with numbers soaring post-Covid pandemic and amid the cost of living crisis.

This Thanksgiving, the food bank has already estimated sending out “several truckloads” of turkeys and poultry, costing $55,000 (£45,344) each.

Mr May said: “So we are right now reaching about 800,000 people every month, and that’s been exacerbated by the pandemic and by inflation.”

Meanwhile, charity Feeding America found in a survey of 170 of its 200 food banks that 90 percent reported increased or steady demand for services as of September.

Ms Raymond, describing her difficulties to Al Jazeera, says she has purchased Thanksgiving ingredients week-to-week to stock up for the holiday.

She has also removed traditional dishes, explaining: “The rising cost of the ingredients has caused us to scale back a bit.

“Breakfast is usually pastries or cinnamon rolls – those have been replaced with blueberry muffins from a mix that I have in my cabinet.”

Other Americans expressed their struggles, with one, Carmen, 56, from South Carolina, telling Express.co.uk: “When I went grocery shopping it seemed like everything was twice as much as last year.

“The only thing that was inexpensive was the turkey, only because it was on sale.

“It doesn’t affect me as much but for someone on a low income, I can’t imagine how they would have the same Thanksgiving as last year.”

President Biden has defended his economic plan, posting ahead of Thanksgiving: “Because of our Administration’s economic plan, 17 states now have unemployment at or below three percent.

“And 11 states and D.C. now have their lowest unemployment rate ever.”