Skip to content
HomeNewsUkraine will ‘not forgive’ Russia for missile attacks: Zelenskyy 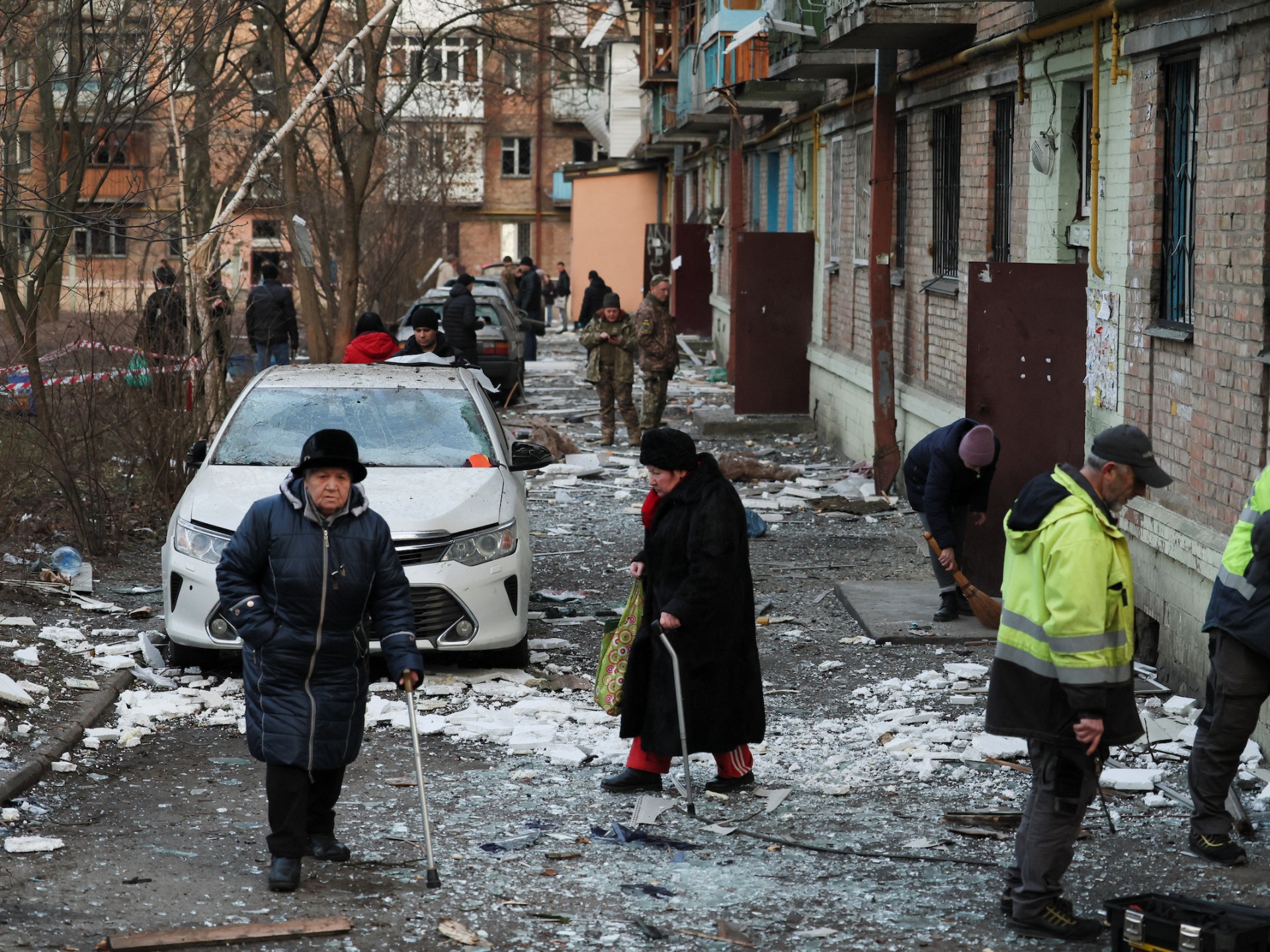 Ukraine’s President Volodymyr Zelenskyy said that his country will not forgive Russia and its aggression after Moscow fired 20 cruise missiles targeting Ukraine, including the capital Kyiv, on New Year’s Eve.

Russia on Saturday fired a barrage of missiles across Ukraine killing at least one person in the capital city in the second wave of attacks on the country in three days. On Friday, Russia carried out one of the largest air strikes since its invasion of Ukraine in February.

“Several waves of missile attacks on New Year’s Eve. Missiles against people … No one in the world will forgive you for this. Ukraine will not forgive,” Zelenskyy said on social media.

The explosions were reported throughout the country on New Year’s Eve on Saturday in attacks President Volodymyr Zelenskyy said showed Moscow was in league with the devil.

Zelenskyy, speaking in a video address, noted that Russia had also launched attacks at Easter and Christmas.

“They call themselves Christians … but they are for the devil. They are for him and with him,” he said.

Kyiv Mayor Vitali Klitschko said at least one person had been killed and 20 wounded after a series of explosions in the capital.

The mayor said one of those injured was a Japanese journalist who had been taken to hospital.

A hotel just south of Kyiv’s city centre was hit, and a residential building in another district was damaged, according to the city administration.

Russia has claimed it was targeting infrastructure but Ukrainian officials say the latest assault targeted civilians.

Al Jazeera’s Charles Stratford, reporting from Kyiv, described a scene where experts gathered evidence of shrapnel, a pool of blood could be seen, and a two-metre crater was left by a direct hit on a neighbourhood in the capital.

“It’s an indication that this campaign by Vladimir Putin, by the Russians, targeting energy infrastructure goes on. [But] there is no indication of the infrastructure of any importance in this neighbourhood. A very grim scene here on New Year’s Eve.”

After the attack, Foreign Minister Dmytro Kuleba called for Russia to be deprived of its permanent seat on the United Nations Security Council.

“This time, Russia’s mass missile attack is deliberately targeting residential areas, not even our energy infrastructure,” Kuleba wrote on Twitter.

This time, Russia’s mass missile attack is deliberately targeting residential areas, not even our energy infrastructure. War criminal Putin “celebrates” New Year by killing people. Russia must be kicked out of its UN Security Council seat which it has always occupied illegally.

Other cities across Ukraine also came under fire. In the southern region of Mykolaiv, local governor Vitaliy Kim said on television that six people had been wounded.

In a separate post on Telegram, Kim said Russia had targeted civilians with the attacks, something Moscow has previously denied.

“According to today’s tendencies, the occupiers are striking, not just critical … in many cities [they are targeting] simply residential areas, hotels, garages, roads.”

In the western city of Khmelnytskyi, two people were wounded in a drone attack, Ukrainian presidential aide Kyrylo Tymoshenko said.

The official also reported an attack in the southern industrial powerhouse city of Zaporizhzhia, which Tymoshenko said had damaged residential buildings.

“With each new missile attack on civilian infrastructure, more and more Ukrainians are convinced of the need to fight until the complete collapse of Putin’s regime,” he wrote.

Meanwhile, President Vladimir Putin said Russia would never give in to the West’s attempts to use Ukraine as a tool to destroy his country.

In a New Year’s video message broadcast on state TV, Putin said Russia was fighting in Ukraine to protect its “motherland” and to secure “true independence” for its people.

Earlier, Russian defence minister Sergei Shoigu said his country’s victory in Ukraine was “inevitable” in a New Year’s message to servicemen, as Moscow’s military campaign grinds through its 11th month.

“In the coming year, I want to wish everyone good health, fortitude, reliable and devoted comrades … Our victory, like the New Year, is inevitable,” Shoigu said in the video address released by the defence ministry.

Shoigu said in the outgoing year “we all faced serious trials” and that the New Year comes during a “difficult military-political situation”. Russian troops have suffered a string of setbacks on the ground during the past months, with the Kremlin in September announcing the mobilisation of 300,000 reservists to join the fighting.