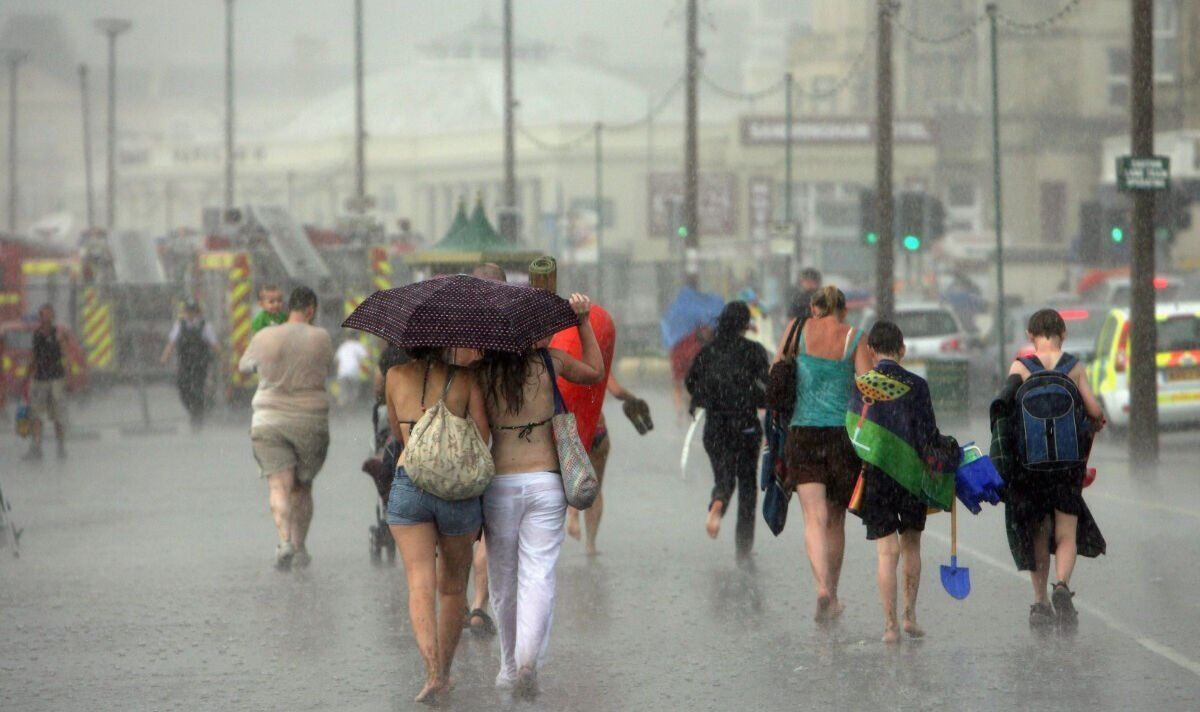 Violent thunderstorms unleashing torrential downpours, lightning strikes and hail threaten power cuts, travel cancellations and chaos on roads and motorways. The explosive outburst will be driven by unstable energy ploughed into the atmosphere and storms swept in from France. The Met Office last night issued a severe weather warning for southern England which faces more than an inch of rain, “frequent lightning”, and rapid flooding.

Heavy downpours will continue this week as temperatures rocket, with a sweltering 27C likely on Tuesday.

Met Office meteorologist Becky Mitchell said: “On Monday, showers continue to push their way northwards, but they will become less thundery as the day goes on.

“Into the afternoon we hang onto a lot of cloud, but further south we should see some warm, sunny spells and a few heavy showers.

“Low pressure in the west tries to work its way in this week, and that will bring some heavy outbreaks of rain to western areas.

“Further east, we hang on to the drier weather under the high pressure and we could see temperatures of 27C on Tuesday.”

Southern Britain will boil in the highest temperatures through the coming days with Scotland and northern England slightly cooler.

Thermometers are likely to hit the high-20Cs before mid-week in the south and the low-20Cs in the north.

James Madden, a forecaster for Exacta Weather, said: “The heat will be more prominent over southern regions hitting the low- to mid-20Cs at the very least, but there is a chance this could be breached.

“Further north we are expecting to see temperatures in the high-teens or the low-20Cs.

“This is the effect of this plume of very warm air coming up from North Africa and the Continent.

“However, there is also the risk of some early summertime storms which could be thundery in nature as we go into the second half of the month.”

While heat-lovers can look forward to more sweltering temperatures through the coming days, forecasters warn to expect a “mixed bag”.

The jet stream will swing across the nation bringing blasts of warmth and cooler, wetter periods.

Jim Dale, a meteorologist for British Weather Services, said: “The hot weather, through this week, may show a pattern of blasting in and then subsiding.

“It is a bit of a mixed bag of heat and showery conditions.

“The jet stream is currently moving northwards allowing a flow of warmer air in from the south, from North Africa across France and the Continent.

READ MORE: Storm latest: Will thunder and lightning strike near you today?

“However, it shows signs of moving south towards the middle of the week, and this will allow more unsettled fronts to come in.

“It is a case of keeping an eye on changes in the weather through the next few days.”

Bookmakers have taken the axe odds on Britain roasting in a blistering summer this year.

Coral is offering 1-2 from 5-4 on this summer steaming into the record books with 4-5 on temperatures reaching unprecedented heights.

Spokesman John Hill said: “Our betting is pointing towards the UK having a scorching summer this year.

“We have slashed the odds on a record hot summer and for the highest UK temperature being broken.”

Sweltering warmth may cool off during the second half of the week although torrential downpours will bring a risk of flooding.

Weathertrending meteorologist John Hammond said: “Amounts will vary greatly but there is the potential for a lot of rain in some places, and flooding is a possibility.

“Computer models are at odds about timing, but the trend from midweek is for fresher Atlantic air to gradually displace the humidity.

“The latter may well cling onto the southeast for a few days, but temperatures will slowly ease down by the end of the week.”

The Met Office’s forecast suggested the UK can expect a mixture of weather over the coming days.

The UK’s national weather service has forecast for Tuesday: “Dry and very warm in sunny spells for central and eastern parts.

Looking ahead to later this week, the Met Office added: “Dry and sunny much of Wednesday before heavy rain spreads from the west and south later.

No flood warnings are as of yet in place in the UK.