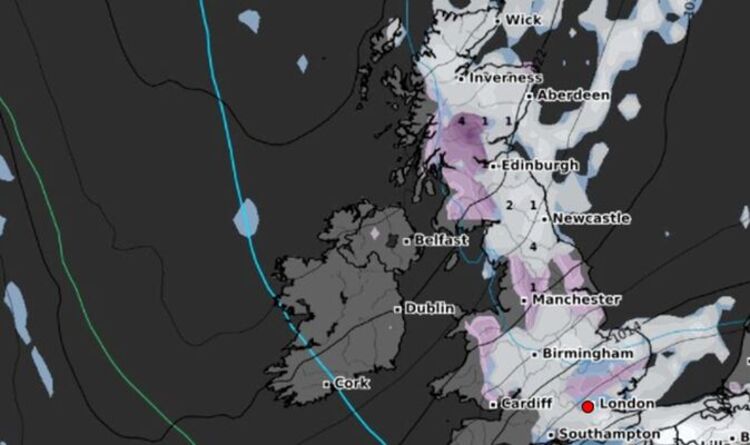 Forecaster Phil Morrish told Express.co.uk that the weather will grow colder throughout the week, with snow and “wintry” showers battering the country as a result of “arctic air”. Weather forecaster WXCharts has forecast snowfall across the UK, with maximum snow depth reaching 6cm in Scotland on Thursday. Manchester can expect to see up to 3cm of snow, with up to 2cm in Newcastle.

It has also forecast lows of -8C in Scotland and -5C in Newcastle on Thursday.

London and the South East can expect temperatures of between 0 and 3C.

Speaking to Express.co.uk, Mr Morrish forecast a major change in conditions from the mild temperatures seen by the UK last week.

He warned that the weather will feel “much more like Winter than Spring”.

However, the forecaster said that the freezing cold temperatures will only last for up to three days, before becoming milder again.

He told Express.co.uk: “We’ve got a large area of high pressure sitting over the country.

“Last week it was sitting to the east of the country, giving us warm, Saharan air, but this week it is now moving northwest.

“What it’s going to do is gradually bring down some very cold, arctic air, which is sitting at the north pole at the moment.

“Down to about 100m to settle, but even further south there will be some wintry showers on Thursday and Friday as this cold arctic air digs in from the North Pole.

“That lasts for two or three days and then it will gradually become a bit less cold. “

He added: “After a very mild week it will become much cooler this week and there will also be night frost.

“So temperatures going down to below freezing once you get to Wednesday, Thursday and Friday down in the Glenns of Scotland, perhaps to -5C.

“So it might have felt like Spring last week, but this week will be very different as the high pressure moves in different places, bringing some much colder air for us to endure this week.

“So it will feel much more like winter than Spring.

“But that’s British weather for you, particularly in April.”