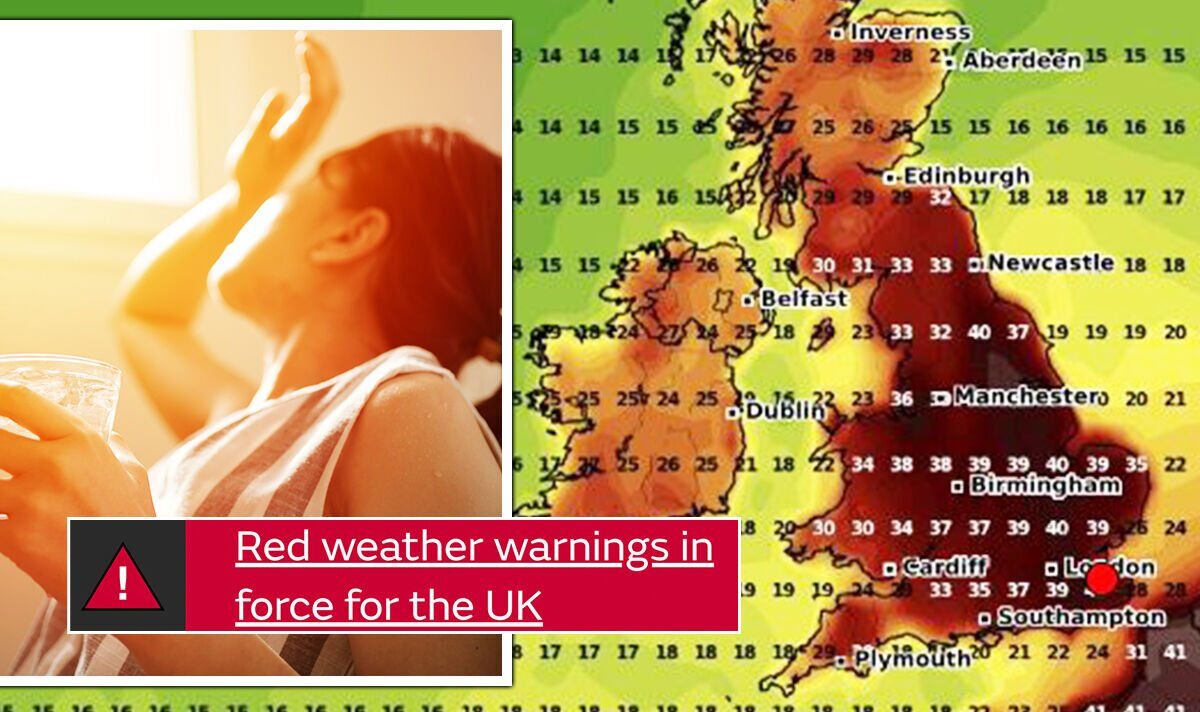 Temperatures are forecast to ramp up from Sunday, but the two days to be aware of are Monday and Tuesday, where parts of the country could hit 40C, a rarity which will break records if it comes to fruition. These areas include London, stretching north past Birmingham, Manchester and Leeds. The intense danger to life warning goes as far as saying there is a risk of population-wide adverse health effects to be experienced. And this is not limited to the most vulnerable.

Much of the country has been prepared for such heat, as the Met Office issued an amber weather warning from Sunday through to Tuesday.

But a red warning is a first, and with it comes a catalogue of instructions and alerts people must be aware of.

The Met says “substantial changes in working practices and daily routines” will be needed, with heat sensitive systems and equipment likely failing due to soaring thermometers.

Water supply could cease and mobile phone services may temporarily be down. Anyone stuck in delays on the roads, railways or cars are due to experience “significant” welfare issues.

The stark messaging says: “Illness and death may occur among the fit and healthy, not just in high risk groups.”

People are urged to keep an eye on the elderly, babies and young children with underlying health conditions.

It says: “Renewed hot or very hot conditions develop across the country during this coming weekend and into the new working week, peaking on Monday and Tuesday, with some exceptional temperatures possible in places. The hottest locations are likely to be in parts of central and eastern England. This alert will be kept under daily review and updated as necessary.”

There is now a whopping 80 percent chance of an all time weather record being broken, topping 38.7C which was reached in Cambridge just two years ago.

Schools are said to be banning outdoor play and PE sessions in a bid to protect pupils from baking in the extreme heat. In some cases head teachers may decide to close early in the interests of safety.

Penny Endersby, chief executive of the Met Office said: “I can say that the extreme heat we are forecasting right now is absolutely unprecedented.

“Here in the UK we’re used to treating hot spells as a chance to go out and play in the sun, but this is not that sort of weather.

“Our lifestyles and our infrastructure are not adapted for what is coming.

“Please treat the warnings we are putting out as seriously as you would a red or amber warning for wind, rain or snow – and follow the advice.

“Stay out of the sun, keep your home cool, think about adjusting your plans for the warning period.”

She said if anyone does need to go out, they must wear a hat and sunscreen, be well equipped with water and ensure they keep in the shade.