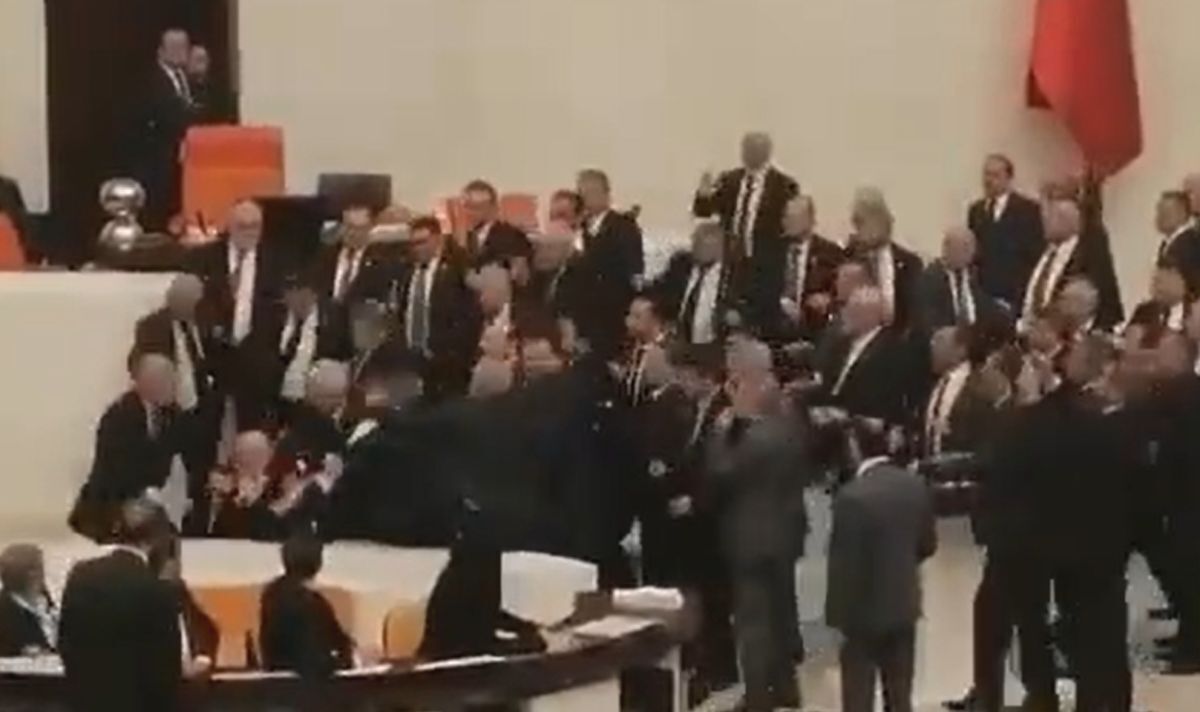 Television footage has captured the moment dozens of Turkish MPs descended into a physical brawl during a parliamentary debate. Frustrations grew as legislators discussed the upcoming annual budget, and Turkish representatives were soon throwing punches at one another amid the chaos. At least one MP, who reportedly suffers from a history of heart problems, was hospitalised after being punched in the face.

The Turkish DHA news agency reported Hüseyin Örs was taken from Parliament in an ambulance after being attacked by fellow MPs.

A Turkish legislator, who is also a qualified doctor, tended to Örs at the scene of the fight after the opposition MP was punched in the face.

Örs is a member of the Iyi (Good) Party, a rival to President Recep Tayyip Erogan’s ruling Justice and Development Party.

Aylin Cesur, who is also a member of the Iyi Party, told Turkish media Örs had been taken to “intensive care” following the assault.

He added that the parliamentary brawl was “unbecoming” for elected representatives.

Leader of the Iyi Party Meral Akşener has since issued a statement to confirm she had visited Örs in hospital, and he is doing “fine”.

She added: “I strongly condemn the disrespect towards the will of the nation and our party in our Assembly.

“No immoral fist will separate us from the path of truth!”

The scuffle comes just weeks after a Turkish MP smashed his phone to pieces with a hammer during a fierce rant against a government-backed bill.

Burak Erbay of the opposition Republican People’s Party launched into a lengthy tirade against the proposed legislation to combat online “disinformation”.

Under the new regulations, internet sites would be expected to release data on users suspected of spreading “misleading information,” although critics have argued the bill would lead to dangerous levels of censorship.

Sharing a clip of the incident on Twitter, Erbay wrote:  “If this law passes the parliament, you can now break your phones and throw them away.”