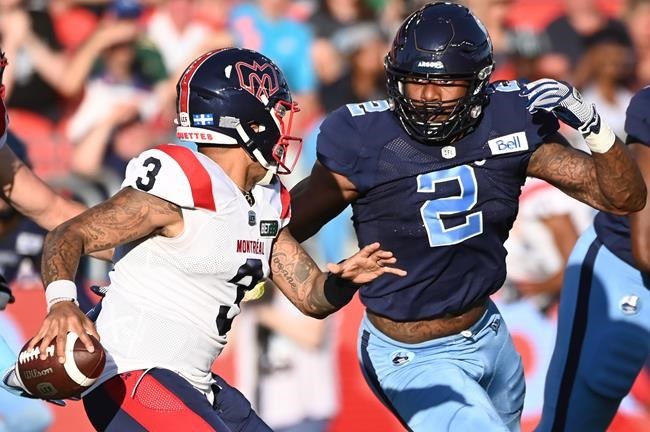 TORONTO — McLeod Bethel-Thompson hit newcomer Brandon Banks with a second-half TD strike as the Toronto Argonauts held on for a season-opening 20-19 home win over the Montreal Alouettes on Thursday night.

Bethel-Thompson’s 15-yard pass to Banks at 2:35 of the third quarter put Toronto ahead 18-6. Banks’ catch ended a five-play, 72-yard drive to open the second half.

Montreal (0-2) had a chance for the win but David Cote missed a 21-yard field goal with 11 seconds that went for a single. It tarnished a stellar 10-play, 63-yard drive engineered by Alouettes quarterback Trevor Harris that included a 25-yard completion to Eugene Lewis on a third-and-10 gamble.

Dominique Davis’s one-yard TD run at 9:14 pulled Montreal to within 20-18 but the two-point convert was unsuccessful. Owner Gary Stern, who earlier this week predicted his team would “kill” Toronto, watched the game from field level near the Alouettes’ bench.

Toronto had an opportunity to put the game out of reach but Boris Bede missed field goals of 32 yards and 45 yards at 1:50 and 5:31, respectively, in the fourth. The singles pushed Toronto’s lead to 20-12.

Andrew Harris ran for 87 yards 18 carries (4.8-yard average) and had three catches for 23 yards in his Toronto debut. The 35-year-old Winnipeg native helped the Blue Bombers win Grey Cup titles in 2019 and ’21.

Toronto continued its mastery of Montreal at BMO Field, improving to 6-1 versus the Alouettes since moving to the facility. By comparison, the Argos are 0-6 in La Belle Province over the same span.

Toronto was 6-1 at home last year en route to finishing atop the East Division with a 9-5 record. The .857 win percentage was the club’s best since 1997 when it went 9-0 at home en route to a second straight Grey Cup.

Overall, the Argos improved to 3-3 in home openers at BMO Field before an announced gathering of 12,498.

Toronto and Montreal split their regular-season meetings last year, with each winning at home. Six of the seven games between the two have been decided by six points or less.

Bede had two field goals in the final 15 seconds of the second quarter to stake Toronto to an 11-6 lead to cap an eventful opening half. His 38-yard kick to end the quarter followed Tavarus McFadden’s 28-yard interception return to the Montreal 31-yard line.

But the late flurry notwithstanding, the opening half had the flow of a stagnant swamp. The combined 14 penalties for 165 yards didn’t help, as well as the eight punts, three turnovers and no TDs.

The contest got chippy in the second when a melee ensued after Montreal linebacker Tre Watson stepped on the chest of Toronto offensive lineman Dejon Allen, who was attempting to make the block. Both were disqualified while Alouettes linebacker Chris Ackie was penalized for unnecessary roughness.

Montreal made a quarterback change in the second when Harris replaced Vernon Adams Jr. after Adams completed just two-of-four passes for 14 yards.

Cote made it 3-3 with a 43-yard field goal at 12:53. It came after Darius Williams returned an interception 52 yards for an apparent TD but upon review he was deemed down by contact at the Toronto 53-yard line.

Bede opened the scoring with a 17-yard boot at 6:08. It followed Mike Jones’s interception in the end zone that was ultimately ruled an incompletion, allowing Bede to cap Toronto’s nine-play, 51-yard march on its first possession.

This report by The Canadian Press was first published June 16, 2022.