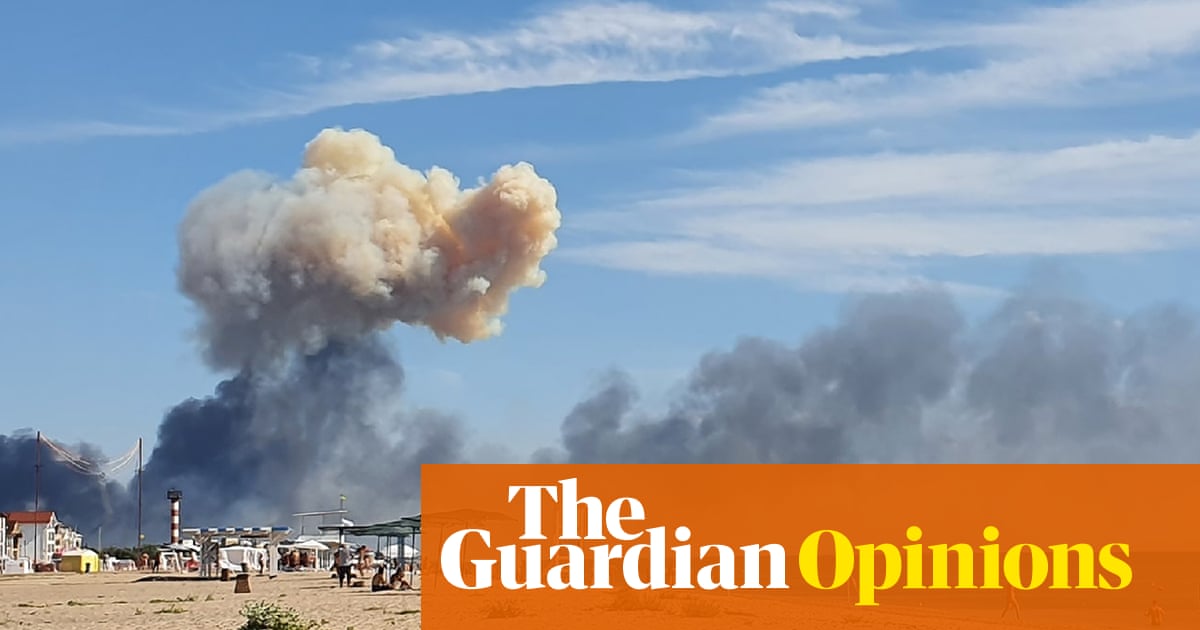 A spate of explosions in Crimea has bolstered the mood in Ukraine. While Kyiv has been coy in discussing the incidents publicly, dropping heavy hints but not explicitly taking credit, unnamed officials have been busy briefing reporters. On 9 August, nine or more Russian warplanes appear to have been destroyed at the Saky airbase on the peninsula that Russia annexed in 2014. Then, on Tuesday, blasts were reported at an ammunition site and airfield. Russia blamed “sabotage”. On Thursday night, there were reports of more explosions at the major Belbek airbase, as well as a blaze at a munitions depot inside Russia.

All these are a much-needed fillip for Ukrainian morale. A senior presidential adviser has said that there is “strategic deadlock”. Though the picture in the country’s south is muddled, Russian forces appear largely stalled. But Ukraine is massively outgunned and Russia continues to gain ground in the east, albeit slowly and with serious losses, by pounding away with heavy artillery and no regard for the cost to Ukrainian civilians or its own forces.

Events in Crimea are a long way from turning the tide. Officials in Ukraine say that they hope hitting deep into occupied territory will cut supply routes and erode Russian capabilities. The defence minister has said that it will ultimately launch a full-scale counter-offensive, when it has the weapons and ammunition that it needs from its partners. In other words, its more nimble approach is a matter of necessity as well as ability.

Additionally, wars are only partially fought on the battlefield. Kyiv also needs to kindle renewed purpose at home and maintain national unity as the relief and pride at holding off the initial Russian onslaught inevitably fades, and grinding economic, social and psychological pressures take their toll. It needs to rattle the confidence of Moscow – which this week replaced the commander of its Black Sea fleet – and lower the morale of Russian forces. Russia felt safe in Crimea, with its tourists sunning themselves on the beaches. Now they have been filmed fleeing the sands, with plumes of black smoke visible in the distance.

Finally, Kyiv needs a sense of fresh momentum to maintain support elsewhere. The story of a plucky, courageous underdog staving off a vicious invasion was enough to create a wave of public and political support across Europe this spring. As fuel prices keep rising and winter approaches, sympathy and solidarity will ebb, and politicians are likely to become correspondingly warier of extending their support to Ukraine and punishment of Russia.

It has also been clear from the beginning of the conflict that a less confident Vladimir Putin may be more dangerous. On Thursday, Moscow snubbed the call from the UN secretary general, António Guterres, visiting Ukraine, for a withdrawal of military equipment and personnel from the Zaporizhzhia nuclear power plant, Europe’s largest. Russia seized the plant this spring and the two countries have accused each other of shelling the site. Ukraine has warned that Russia may plan to stage a “provocation” there or to stop generating electricity – which could increase the risk of an accident. Mr Putin knows that the weaponisation of a nuclear plant would be crossing a new frontier. But brinkmanship is itself a danger, bearing the risks of unintended disaster. Whatever confidence Kyiv has gained from the damage in Crimea, it will not mistake events this week as offering respite.