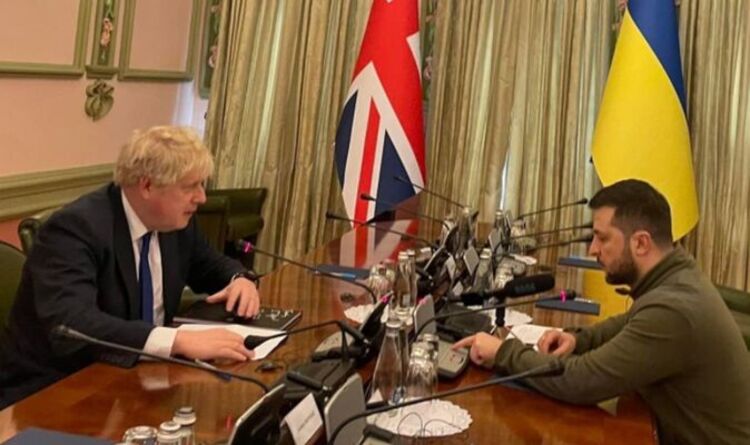 Boris Johnson and Volodymyr Zelensky were pictured holding a meeting in Kyiv to discuss Russia’s invasion of the country which began in February. An image of the pair was shared by the Embassy of Ukraine to the UK.

The photograph shows the men sitting across from one another in the mid of crisis talks, in the country’s capital, with their respective flags in the room.

Details of the visit had not been shared publicly prior to the release of the image.

The surprise meeting between the pair was announced by Ukrainian officials and has since been confirmed by Downing Street.

The photograph was captioned with the word “surprise” alongside a winking emoji.

The instance makes the Prime Minister the first G7 leader to arrive in Ukraine.

The Prime Minister’s visit to meet his Ukrainian counterpart is particularly significant given the support Britain has provided to the country since Putin’s invasion began.

Mr Johnson’s visit is meant to be a display of “solidarity” with the Ukrainian people impacted by the war, according to a spokesperson.

The PM and President Zelensky will also discuss how to defend Ukraine against Vladimir Putin’s invasion.

A No 10 spokeswoman said of the visit: “The Prime Minister has travelled to Ukraine to meet President Zelenskyy in person, in a show of solidarity with the Ukrainian people. They will discuss the UK’s long term support to Ukraine and the PM will set out a new package of financial and military aid.”

The photo was also shared on Facebook by presidential aide Andriy Sybiha.

It was captioned with: “Boris Johnson’s visit in Kyiv began just now with a tete-a-tete meeting with President Zelensky.”

Mr Sybiha described Mr Johnson as “the leader of the anti-war coalition. The leader of sanctions on the Russian aggressor.”

He said: “I’m glad he’s gone. It’s important to stand with our Ukrainian allies right now and show that we are planning a future.”

Stuart Anderson, a former soldier who served with the Royal Green Jackets who is now the Tory MP for Wolverhampton South West, was delighted to see the PM alongside Zelensky.

He said: “I think that sight is one of the greatest sights I’ve seen for a long time. You’ve got the hero Zelensky and [his close friend Boris Johnson] looking at how they take on the tyranny of Putin. Standing shoulder to shoulder, our Prime Minister there with the legend that is Zelensky, it just doesn’t get any better than that.”

Tobias Ellwood, a former captain in the Royal Green Jackets who now chairs the defence select committee, responded to the PM’s arrival in Ukraine by pushing for the UK to do more to liberate the country.

He said it was “our time to lead a coalition of the willing, step beyond Nato’s self-imposed limits and help train and arm Ukraine to victory”

The surprise meeting comes just a day after the PM held a press conference at Downing Street about the Ukraine war following talks with the German chancellor Olaf Scholz.

Mr Johnson pledged to send £100m worth of high-grade military weapons to Ukraine.

During the press conference, Mr Johnson also said the Europe we knew six weeks ago “no longer exists”.

Despite this, the PM added that Putin had “succeeded in uniting Europe and the whole transatlantic alliance in support of Ukraine and in solidarity with each other”.