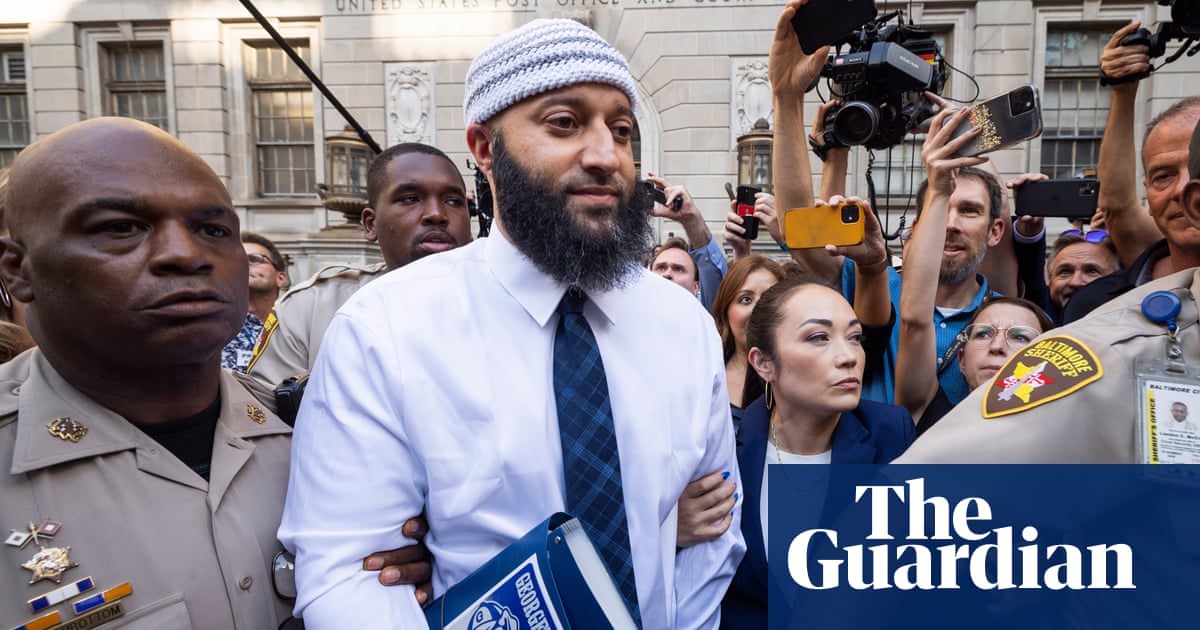 After spending more than two decades in prison, Adnan Syed was released on Monday after new evidence was uncovered in the 1999 murder of Hae Min Lee, a high school student and Syed’s ex-girlfriend.

The case became known internationally through the podcast Serial, which explored the murder and inconsistencies in Syed’s conviction, in the process inventing a new genre of journalism – and entertainment.

The team behind Serial was lauded for its work, which sparked a slew of copycat podcasts, though it also raised ethical questions about whether true crime podcasts do noble work or exploit human suffering.

Hae Min Lee was last seen at about 3pm on 13 January 1999. Her family reported the 18-year-old high school student missing after she failed to pick up her niece. Lee’s body was found, partially buried, four weeks later in Leakin Park, west Baltimore. She had been strangled.

Police arrested Syed, Lee’s ex-boyfriend, on 1 March. The pair both attended Woodlawn high school, and had dated the previous year. According to court records, Lee had ended the relationship in December that year. Syed was 17 when he was arrested, but was charged as an adult with first-degree murder.

Prosecutors said Syed had killed Lee after becoming upset when she started dating someone else. Syed pled not guilty and his first trial ended in a mistrial, but in February 2000 he was convicted of first-degree murder and kidnapping, and sentenced to life plus 30 years in prison.

He has always maintained his innocence, and 14 years later the podcast Serial brought renewed focus on Lee’s murder.

“The case against [Syed] was largely based on the story of one witness, Adnan’s friend Jay, who testified that he helped Adnan bury Hae’s body,” the podcast description reads.

“But Adnan has always maintained he had nothing to do with Hae’s death. Some people believe he’s telling the truth. Many others don’t.”

Across 12 episodes, the presenter and journalist behind the podcast, Sarah Koenig, a former reporter for the Baltimore Sun who also worked on the podcast This American Life, trawled through thousands of documents and talked to everyone she could find who knew Syed and Lee at the time of Lee’s death.

Koenig found that there was scant forensic evidence linking Syed to Lee’s murder, and that witnesses had changed their statements to the police.

Questions were also raised about the competence of Syed’s lawyer, and the veracity of the evidence provided by Jay Wilds, the prosecution’s key witness. According to Wilds’s testimony, Syed told him he had killed Lee, and asked Wilds to help bury her body; but Wilds’s story changed across his interviews with police, and his timeline did not match call logs and cell phone tower ‘pings’.

The podcast did not come to a firm conclusion as to Syed’s innocence or guilt, but Koenig felt there was not enough evidence to have convicted him.

“You, me, thestate of Maryland, based on the information we have before us, I don’t believe any of us can say what really happened to Hae. As a juror I vote to acquit Adnan Syed. I have to acquit,” she said in the final episode, which was released in December 2014.

Koenig might not have come to a firm conclusion about Syed, but the podcast brought previously unimaginable attention to his case. Serial was a huge hit, and by February 2015 had been downloaded more than 68m times.

“It is by far the biggest hit in the relatively brief history of podcasts, a medium that has surged in popularity as people increasingly turn to smartphones for news and entertainment,” the New York Times wrote at the time.

Serial won multiple awards, including a Peabody award, but not everyone was happy.

Serial had begun after Rabia Chaudry, whose younger brother Saad is close friends with Syed, had written to Koenig asking her to look into the case. Chaudry, a lawyer, had spent years investigating Syed’s conviction, and has since criticized Serial for allegedly omitting information relating to the investigation into Lee’s death.

“Serial set fire to Adnan’s story, to some extent deliberately, and has never apologized or made amends,” Chaudry tweeted on 16 September this year. “Should I be grateful? I find it hard to be. But I am grateful to the thousands that responded to the fire to help rebuild.”

In the years since Serial ran, true crime has become one of the most listened-to podcast genres. Bear Brook, which focuses on four murders in New Hampshire, followed a similar format, as did In the Dark, which followed the case and eventual release of an innocent Mississippi man convicted of murder.

Other podcasts have had less of an influence. Shows like My Favorite Murder, Crime Junkie and Morbid fall into a subgenre of true crime where hosts read cursory accounts about gruesome murders, interjecting jokes and commentary.

“The ethics of true crime podcasts are questionable. They appear to promote social justice but may utilize media tactics that could be exploitative and sensationalist,” wrote Ezri Noe for a study at Northwest University. “True crime podcasts bear ethical responsibility to promote social justice and advocacy, as they profit off real stories of murder, kidnapping, and crime.”

As for Syed, he is finally a free man – for now. In overturning Syed’s conviction, the judge said the state must decide whether to seek a new trial date or dismiss the case against him within 30 days, so Syed faces an anxious wait.

For Lee’s family, the question of who killed Hae Min lingers on, a two-decade saga that is unimaginably painful.

“This is not a podcast for me,” Young Lee, Hae Min’s brother, told the court on Monday. “It’s real life that will never end. It’s been 20-plus years. It’s a nightmare. This is killing us.”