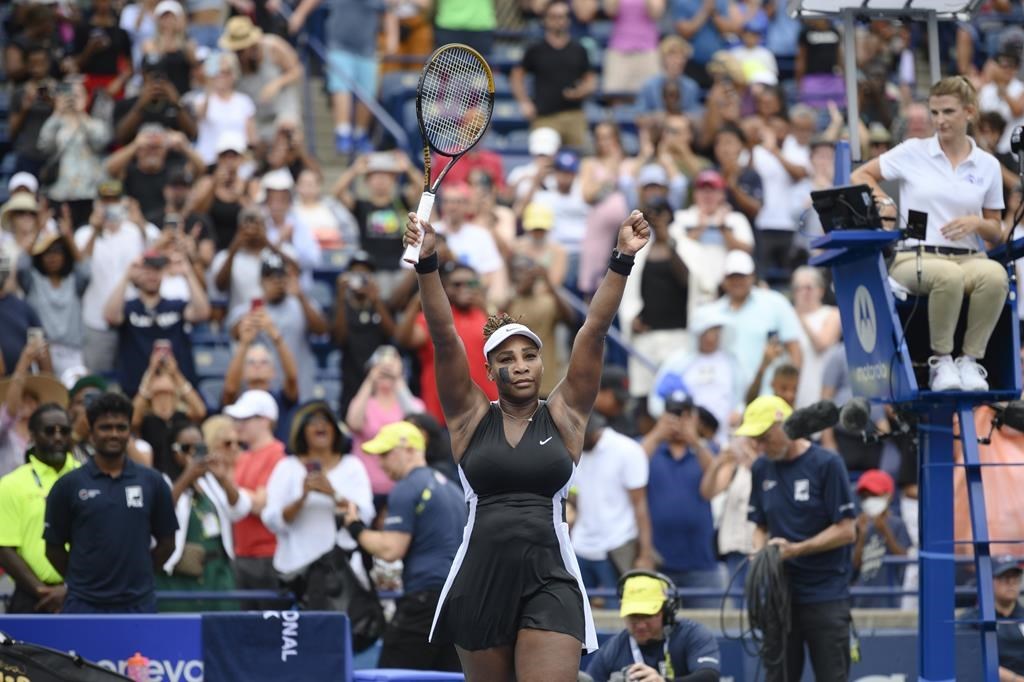 TORONTO — Having been unable to compete much over the last couple of years, Serena Williams says she forgot what it was like to win.

She got a reminder Monday afternoon.

The 23-time Grand Slam champion took her first win of the season, and first since June 4, 2021 at the French Open, defeating Nuria Parrizas-Diaz 6-3, 6-4 in the opening round of the National Bank Open.

“I’m just happy to get a win. It’s been a very long time, I forgot what that felt like,” she said.

It’s just the second tournament of the season for Williams, who made her return to competition at Wimbledon just over a month ago. She fell in the first round to Harmony Tan in three sets at the All England Club.

Before then, she last competed at the 2021 Wimbledon tournament, where she retired in the middle of her first match due to a torn hamstring suffered after slipping on the grass surface.

Coming off a tough injury and being on the back-end of her career (she turns 41 in September), Williams had moments on Monday where she seemed to turn the clock back.

“I feel good, I felt like I competed well today. I think that’s what I needed to do, is just compete,” she said. “Mentally, I’m getting there. I’m not where I normally am (or) where I want to be. Any match I play, whether I win or lose, helps me.

“I haven’t played a lot in the last year, (even) two years. I think that helps me physically. I feel much better in practice, it’s just getting that to the court. Literally, I’m the kind of person (where) it takes one or two things and then it clicks.”

It looked to have clicked at times for Williams, who is widely considered the greatest women’s tennis player ever and is a three-time winner of the National Bank Open, formerly known as the Rogers Cup.

The American started out strong, taking the first two games with relative ease.

Parrizas-Diaz tied it 2-2, but despite Williams’ struggles at certain points, the 31-year-old Spaniard couldn’t find enough of a consistent flow to get ahead.

Williams had 29 unforced errors in the match, with some shots having a bit too much power and going wide or past the baseline.

Tied at 3-3, it was Williams who found her rhythm, mixing solid touch on backhand shots, while also putting her signature power on display with crosscourt forehands going out of Parrizas-Diaz’s reach.

Up 5-3, Williams had trouble landing set point, with he 57th-ranked Parrizas-Diaz fighting to send the game back to deuce on several occasions.

But Parrizas-Diaz had trouble with Williams’ serve, as the American scored on three of her four aces within the span of several deuces.

The last of them caused Parrizas-Diaz to hit a high arching shot that allowed Williams to fire a forehand the opposite way, well out of her reach, to win 6-3 on her fourth set point.

In the second set, Parrizas-Diaz opened things up looking to build some momentum of her own.

Taking advantage of Williams’ inability to get from one side of the court to the next, she fired forehands out of Williams’ reach to jump out to a 2-1 lead.

Williams then turned up the intensity level.

After taking away the Spaniard’s advantage in a game that featured a number of deuces, Williams pulled out all the stops, showing flashes of her old self.

With a mix of touch shots along with some powerful forehands in a lengthy exchange, Williams levelled the score at deuce with a strong cross-court forehand.

After taking the advantage on the next play, Williams won the game with another cross-court forehand that was too much for Parrizas-Diaz.

Williams’ effort had the fans on their feet roaring — and some even bowing.

“I just love it here. It’s no secret,” Williams said. “I’ve had a fabulous time on court and probably a better time off the court here.

“It’s a great city, I love being here. I used to visit here all the time with friends, great memories.”

A similar effort came along when Williams was down 4-3.

In the longest game of the match, both players traded point after point, with Williams saving four break points.

Williams took the advantage with one of her seven aces on the day, followed by another strong serve that Parrizas-Diaz had trouble handling, as she hit a rainbow of a shot past the baseline to give Williams the game.

After going up 5-3, Williams jumped out to a 40-15 lead to set up match point. Forcing Parrizas-Diaz to hit another long, arching shot off her serve, a forehand from Williams left Parrizas-Diaz lunging for a backhand shot that skied out of bounds, sealing her fate.

While Williams says the end of her remarkable career is in sight, she’s enjoy her time and staying in the moment.

“I’m getting closer to the light. Lately, that’s been it, I can’t wait to get to that light,” she said. “(It represents) freedom. I love playing though, it’s amazing. I can’t do this forever, so sometimes you just want to try your best to enjoy the moments and do the best that you can.”

Williams will next play the winner between 12th-ranked Belinda Bencic and Tereza Martincova.

This report by The Canadian Press was first published Aug. 8, 2022.