Skip to content
HomeNewsRadio Waves: Blue Jays take to the road but radio crew to call games from Toronto 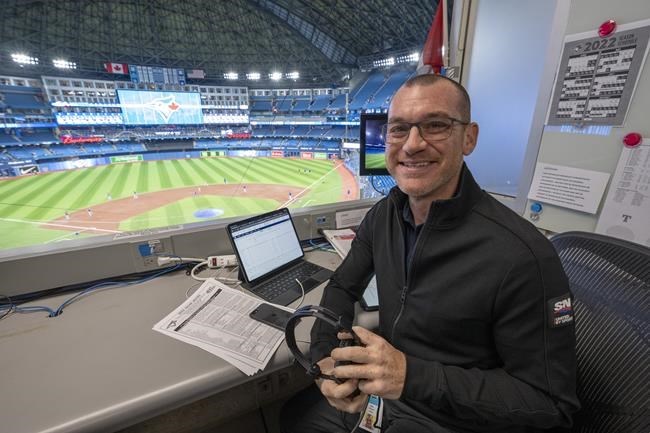 When Toronto shortstop Bo Bichette snagged a liner in the ninth inning of Saturday’s 4-3 win over the Texas Rangers, Blue Jays broadcaster Ben Wagner called the play with the energy of an observer who was clearly on the scene.

The natural rise in his voice and quick sharpness in the description worked in perfect harmony with the roar from the home crowd. It provided a great example of why the radio medium works so well from the baseball broadcast booth.

It’s a call that likely wouldn’t have sounded quite the same if the Blue Jays were playing away from home.

While Sportsnet’s television simulcast on the radio for part of last year appears to be a one-and-done experiment, the rights-holder is not sending Wagner on the road even though dedicated radio broadcasts have returned for the full season.

For the Blue Jays’ 81 road games, he’ll call the action off screens from a studio at the company’s downtown headquarters.

“I’m thinking about it as a broadcaster and thinking I feel as if what I’d be missing is that 1,000-foot view,” said longtime newscaster Paul Cross, a radio professor at Toronto’s Humber College. “That experience, that overview of the stadium, I can see the entire field, I can feel what the crowd is feeling. I can hear it, I can smell it, I’m immersed in it.

COVID-19 concerns and travel restrictions meant remote broadcasting was the reality for many TV and radio broadcast crews when sports first returned in the pandemic’s early days. The difference was noticeable but viewers and listeners had to accept it given the unusual circumstances.

Almost all big-league baseball radio crews are back travelling again this season. Toronto’s is not, at least for now.

“It is your No. 1 goal out there to paint the pictures and provide accurate play-by-play descriptions and that’s why those intricate details are so important.”

Broadcasters who aren’t on site can miss opportunities that only in-person staffing can provide. And it’s not just the call of the game that can be affected.

There are pre-game conversations with players and coaches by the batting cage. There’s batting practice viewing and watching all the little things that happen across the diamond. It’s also an opportunity to work contacts and interact with the other team.

Face time can be particularly invaluable, especially on the road where things tends to be more relaxed and access can be better.

“I think that you’re really at a disadvantage if you’re not with the ball club so I’m really disappointed that we’re not travelling at the start of the season,” Wagner said. “I hope that’s open to further consideration as the season continues.

“Hopefully with the expectations and the level of excitement around this team, that is something that is consistently re-evaluated.”

Sportsnet is sending television crews and its baseball insiders on the road this year. The network declined an interview request to discuss radio plans for the 2022 campaign.

The Blue Jays, who opened the regular season with a three-game home series, will kick off a four-game series Monday night in New York. A six-game road trip with stops in Boston and Houston is set for later this month.

“Not having that on-site piece will significantly impact the feel of that broadcast … the consumer will notice for sure,” said Mike Naraine, an assistant professor with Brock University’s department of sport management.

Wagner, who was been calling Blue Jays games since 2018, is alone on the call with the exception of occasional guests.

He watches two 60-inch monitors during road games. One has the regular Sportsnet feed and the other has an overhead shot of the ballpark.

Additional feeds can also be used (scoreboard feed, bullpen cams, etc) but it can be difficult to jump between monitors during in-game play, Wagner said.

Quick cutaways on the TV feed can also be challenging. It can be easy to miss things like an umpire’s call or who’s walking to the on-deck circle.

“When you’re calling a game off of a monitor, you’re trying — hopefully — to see some reaction from a player,” Wagner said. “You know, a pumped fist from Vladdy (Guerrero Jr.) on a bang-bang play because he knows he got the out. Or a runner that’s running through and the camera follows that person and you don’t see the umpire and (the player) slams his bat or his helmet down.

“Bang-bang plays are just awful. You don’t see runners coming around third heading toward the plate while the ball is tracked in the corner. For a radio broadcast, there are massive obstacles in the in-game mechanics of doing the broadcast.”

Cross said that baseball doesn’t seem to be considered as important on the radio these days, adding the Blue Jays’ radio broadcasts used to serve as the soundtrack of Toronto summers back in the team’s early-90’s glory days.

“You couldn’t go anywhere without hearing the game,” he said. “It just sounded so big and so live and so fantastic because they were right there. So if it doesn’t feel big and live and important coming out of the radio, maybe listeners will have something to say about that.

This report by The Canadian Press was first published April 11, 2022.