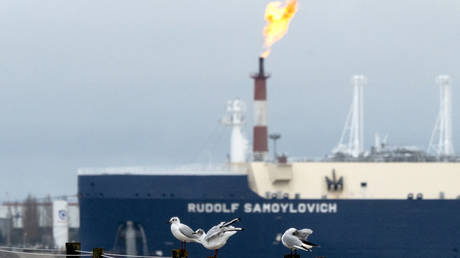 Setting a price cap on gas would disrupt the free market and hurt investment, Saad Al Kaabi says
EU nations that want to “fix” the gas market by capping prices are acting against their own laws that protect free competition, the energy minister of Qatar has said.“Free market is always the best solution, and if you try to fix the market you are going against all the anti-competition laws that the Europeans were trying to put on sellers – and now they are doing it themselves,” Saad Al Kaabi told Bloomberg TV on Sunday.Host Simone Foxman asked if he thought Brussels was being “a bit hypocritical” with the proposed cap, to which the Qatari official responded: “It’s not a bit, it’s a lot hypocritical.”The European Commission is considering a dynamic price cap on natural gas traded on EU exchanges. The measure would supposedly reduce market volatility and extreme speculation amid the transition away from Russian pipeline supplies. The EU is also mulling joint purchases of gas and mandatory sharing by member states to cope with potential shortages.The Qatari minister, who also heads state-owned liquified natural gas (LNG) exporter QatarEnergy, warned that government intervention makes it harder for producers and investors to plan their business strategies. Ultimately, the EU may hurt itself by causing a shortage of physical fuel on the global market, he said.

The EU may find it hard to fill storages with gas for future winter seasons, depending on how harsh the weather is and how the economy copes by shutting down factories and switching to fuels such as coal, Al Kaabi noted. When buying products in a liquid market, buyers have to be prepared to pay a premium for securing supplies, which will convince sellers not to go elsewhere, he said.“I think striving to get peace in Europe would help drastically in bringing the price down,” he suggested. “That’s not rocket science, it’s very clear.” The European energy market, which had already been under pressure in 2020 due to the consequences of the Covid-19 pandemic, went into turmoil following the launch of Russia’s military operation in Ukraine.The EU responded by cutting trade ties with Moscow, particularly in the energy sector. Before the conflict, relatively cheap Russian pipeline gas had a major share of the EU market, with other fossils such as oil and coal present in the energy mix as well.

READ MORE:
EU may pay big price for abandoning Russian energy – Sechin
Officials in Brussels have said that member states must pay the price as they arm Ukraine to defeat Russia on the battlefield. Moscow has warned that products will not be sold to buyers who attempt to enforce a price cap on Russia.
You can share this story on social media:
Follow RT on