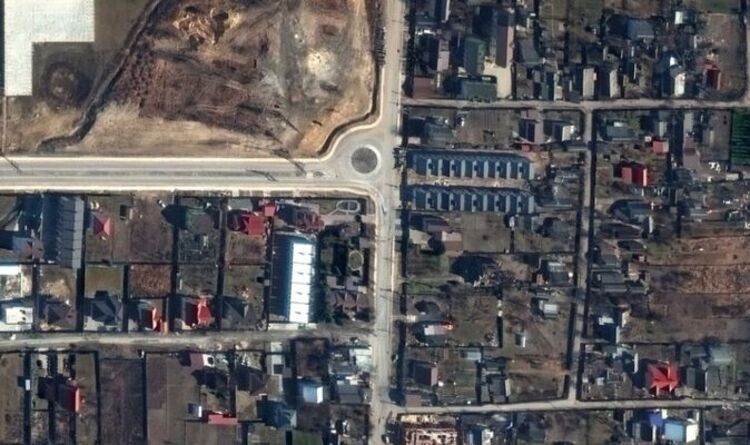 WARNING: THIS ARTICLE CONTAINS IMAGES AND DESCRIPTIONS SOME MAY FIND DISTRESSING

The images appear to show dead corpses strewn across the streets of Bucha. It came after Ukrainian forces claimed to find evidence of civilian murders after re-entering the town following the exit from the Russians. Now, Maxar Technologies high-resolution satellite images “verify” the claims, according to the company’s spokesman Stephen Wood.

He said: “High-resolution Maxar satellite imagery collected over Bucha, Ukraine (northwest of Kyiv) verifies and corroborates recent social media videos and photos that reveal bodies lying in the streets and left out in the open for weeks.”

Images also appear to show a grave filled with bodies.

The Maxar images have revealed signs of excavation dating March 1, and images from March 31 show a 45ft trench.

Ukraine authorities have claimed they came across 410 civilians bodies on the outskirts of Kyiv.

Photos taken on the ground have been matched up with archived satellite images, further supporting the allegations of war crimes.

The New York Times matched up to 11 bodies laid out on the street of Yablonska in Bucha that were taken in close-up photos with a video that a local resident had shot on April 2 and with a satellite image from March 1.

At that point, Russia was in control of the town just outside Kyiv, indicating that the bodies may have been there for weeks.

The analysis undertaken by the publication was also fact-checked by the BBC.

Maxar satellite images from March 19 and March 21 indicate that there were multiple bodies were on Yablonska street.

And the images appear to show bodies in the exact position on the ground as seen in video footage from the street.

READ MORE: Germany backs down and REFUSES to cut energy ties with Russia

“We know that thousands of people have been killed and tortured with extremities cut off, women raped, children killed. It’s genocide.”

The US has also argued that Russia should be suspended from the UN human rights council over the emerging evidence of the mass executions committed by Russian troops in Bucha.

But Russia has staunchly denied the claims.

Its Defence Ministry has claimed that the troops “withdrew completely from Bucha as early as March 30”, with Moscow arguing that the images are “fakes”.

Moscow’s envoy Vassily Nebenzia claimed at a press conference on Monday that the dead bodies were not on the streets before the troops left the city.

He said: “Suddenly they appear on the streets lying on the road, one by one, left and right, some of them are moving, some of them showing the signs of life,” he said, claiming the scenes were “arranged by the Ukrainian information, information warfare machine.”

But the satellite images appear to provide evidence that the bodies were there for weeks before the troops left.

Foreign Secretary Liz Truss is now set to meet her Ukrainian counterpart in Warsaw as the West eyes up even tougher sanctions in response to the emerging evidence of war crimes.

She said: “Putin is yet to show he is serious about diplomacy. A tough approach from the UK and our allies is vital to strengthen Ukraine’s hand in negotiations.”