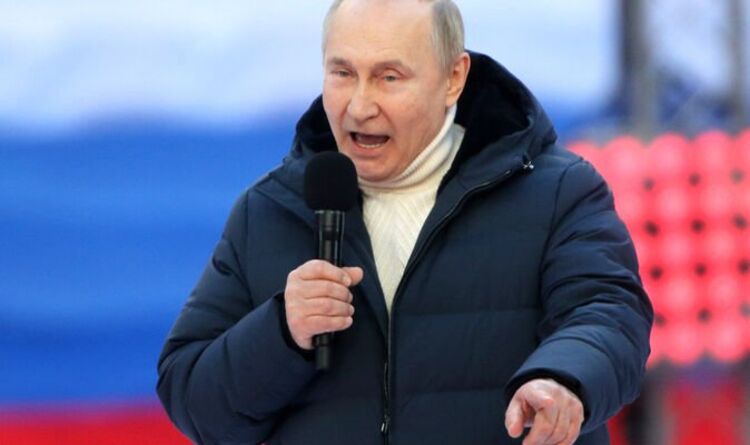 Britain insists it will not pay in ­roubles but Downing Street fears the Russian president’s threat could hit European allies and raise wholesale prices further.

Moscow supplies about a third of Europe’s gas, with Germany, Europe’s biggest economy, and Poland large consumers. Berlin has said it will ­continue paying in euros and dollars.

“It is from these accounts that ­payments will be made for gas delivered, starting from tomorrow.”

He added: “If such payments are not made, we will consider this a default on the part of buyers, with all the ensuing consequences.”

“Nobody sells us anything for free, and we are not going to do charity either – that is, existing contracts ­will be stopped.”

Pounds, dollars and euros are now much less valuable to the Kremlin. But Western experts are “very sceptical” as turning off its gas would ­
be too damaging to Moscow.

One Western official said: “It is very difficult for some European economies to stop buying Russian oil and gas in the short term.

“But it is also incredibly difficult for Russia to stop selling oil and gas to western Europe.”

“I’m very sceptical that these sorts of threats will be followed through. They will be too damaging.”

“It would shock all of the customers into moving even faster away from Russian hydrocarbons.”

A decree signed by Putin states ­foreign buyers of Russian gas would have to use special accounts at Gazprombank to make payments.

They must now transfer foreign currency to one special so-called “K” account. Gazprombank will then buy roubles on behalf of the gas buyer to transfer roubles to another “K” account. However, Germany’s chancellor Olaf Scholz said: “We looked at the contracts for the gas deliveries. They say that payments are made in euros, sometimes in dollars…and I made clear in my conversation with the Russian president that that will remain the case.”

Robert Habeck, Mr Scholz’s economy minister, said the West would not be blackmailed and called Putin’s move a failed attempt to divide allies over energy supplies.

He said: “With regard to the threat, demand or consideration – one doesn’t know what to call it anymore – to be made to pay in roubles, it is crucial for us that the contracts are respected.”

“It is important for us not to give a signal that we will be blackmailed by Putin.”

Germany and Poland aim to stop using Russian energy by the end of the year.

The rouble fell to historic lows after Russia invaded Ukraine on February 24, but has since recovered.

On Wednesday Vyacheslav Volodin, the Russian parliament’s lower house speaker, said: “European politicians need to stop the talk, stop trying to find some justification about why they cannot pay in roubles.”

He added: “If you want gas, find roubles.”

His comments came after demoralised Russian troops were said to be refusing orders from superiors and sabotaging their own equipment.

Sir Tony said Putin had overestimated the power of his military, which has suffered devastating losses in Ukraine.

He said Putin’s position was “diminished”, through a series of “catastrophic misjudgments”, including an “insane” decision not to tell his armed forces that they would be invading Ukraine.