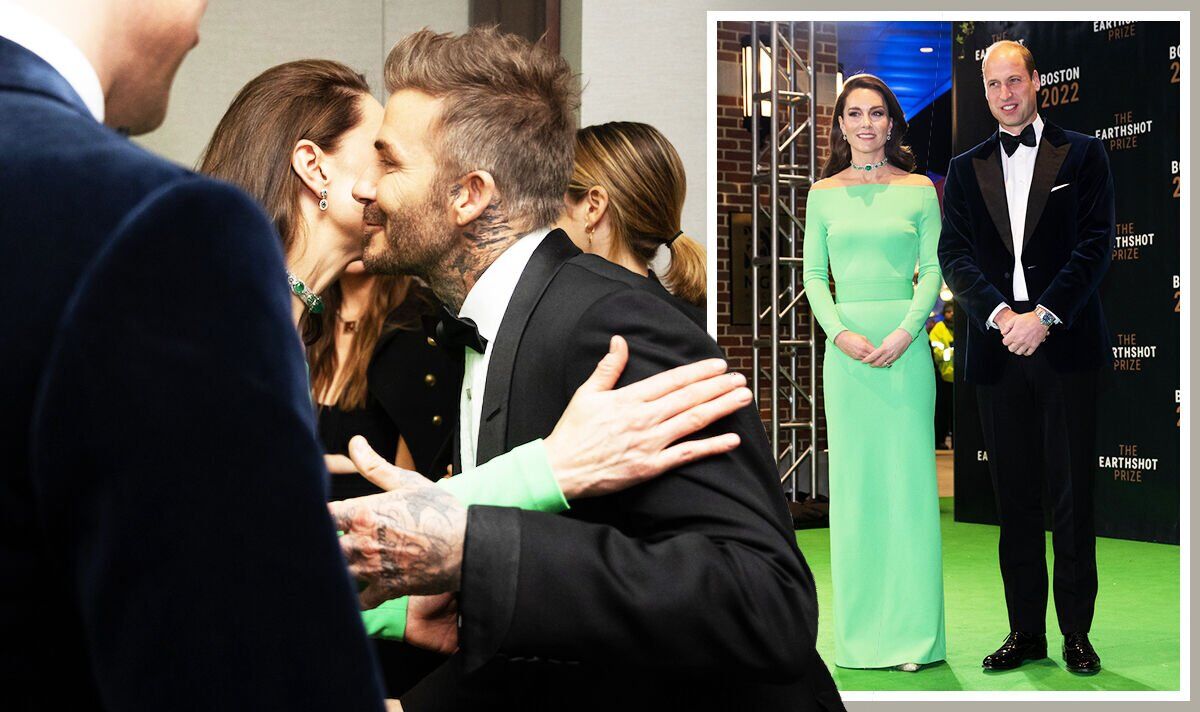 Kate, Princess of Wales, greeted David Beckham with a kiss and warm embrace on Friday as she hosted the Earthshot prize ceremony alongside her husband, Prince William. Princess Kate, 40, puckered up and planted a peck on the footballing legend’s cheek as she greeted the friend of the Firm backstage at the prize’s official ceremony at the MGM Music Hall in Boston. Prince William appeared similarly pleased to see his longtime acquaintance as he made a surprise appearance at the awards show last Friday, as the pair greeted one another and shook hands.

Mr Beckham was among many notable guests at the event and arrived in Boston via hybrid car with a police escort.

He has long worked with the royals, especially the Prince, who has served as president of the England Football Association for more than 15 years – since 2006.

The 47-year-old footballer looked dapper in a tuxedo and mingled with other high-profile figures before he presented one of the awards that evening.

Mr Beckham’s appearance at the event marks his latest debut in a packed schedule, as the busy ex-footballer has jetted around the world over the last few weeks.

He attended several World Cup matches in November while acting as an ambassador for Qatar in a controversial £10 million deal with the nation.

He missed a match as he travelled back to the UK to support his wife Victoria during her work Christmas party at her Dover Street store in Mayfair.

The two were spotted stony-faced as they left the store around 10pm, wearing matching black outfits.

His surprise appearance at the Earthshot prize saw him present the Build a Waste-free World award to British-based startup Notpla for its seaweed-based recyclable packaging.

While his appearance at the Earthshot prize was a surprise, his hosts stole the show.

Princess Kate debuted in a stunning rented neon green dress from online designer HURR as she walked down the green carpet and greeted guests.

The event, branded as one of the most sustainable ever televised, saw another five awards distributed, each worth £1 million.

Other winners included a female-led effort to train indigenous rangers in Australia and a portable “greenhouse-in-a-box” firm directing efforts to boost harvests in India.

A technique that transforms atmospheric carbon into rock also won last night, as did a female-founded group in Kenya working to introduce cleaner burning stoves to reduce indoor pollution.

Mukuru Clean Stoves received their award from Princess Kate, who delivered a short speech on the importance of clean air.

As she delivered the Clean Air Award, she said: “To breathe clean air is something so many of us take for granted.”

“But sadly, for millions of people around the world, it is not a given.

“From smog enveloping cities to the impact seen in nature, air pollution poses a threat that knows no borders.

“Heartbreakingly, over 250 million children under the age of five are breathing polluted air every single day.”

Introducing the event, Prince William said: “I believe that the Earthshot solutions you have seen this evening prove we can overcome our planet’s greatest challenges, and by supporting and scaling them we can change our future.”