Secretary-General António Guterres began the commemoration by laying a wreath at the Peacekeepers Memorial at UN Headquarters, in homage of the more than 4,200 blue helmets who have sacrificed their lives over the past seven decades.

‘Forever in our hearts’

He also honoured the 117 peacekeepers who died last year.

“Our fallen colleagues came from 42 different countries and diverse backgrounds. But they were united by a common cause: peace,” he said.

“I extend my deepest condolences to their families. They will remain forever in our hearts.”

The International Day of United Nations Peacekeepers is observed annually on 29 May to celebrate the contribution of uniformed and civilian personnel serving at field operations.

Protecting the most vulnerable

The Secretary-General said that he is proud of the work of UN’s peacekeepers amid the “great and growing challenges” they face, such as increasing political tensions, deteriorating security situations, threats from terrorist attacks, and violence fueled by the surge in misinformation and disinformation.

“They work tirelessly in the toughest of conditions,” he said. “They adapt to rapidly evolving situations on the ground. And they constantly innovate to protect the most vulnerable – while representing our diverse global community. They advance the greatest mission of all — peace.”

Vietnamese peacekeepers serving with the UN mission in South Sudan plant a sapling as part of a project with local youth.

However, he noted that tragically, sometimes peacekeepers do not come home, before acknowledging the loss of Captain Abdelrazakh Hamit Bahar of Chad, who this week received UN Peacekeeping’s highest award.

Captain Abdelrazakh, 34, died in a bold counterattack against armed terrorists in northeast Mali in April 2021.

His family has been presented the Captain Mbaye Diagne Medal for Exceptional Courage, named in honour of a Senegalese peacekeeper who saved hundreds of lives while serving with the UN in Rwanda in 1994, before being killed in action.

“Please know that your loved son and brother will always be remembered.  He is an inspiration to the UN family, at home in Chad, and around the world,” said Mr. Guterres.

The Secretary-General also expressed gratitude to the Government of Chad for its contribution to the UN Mission in Mali, known by the French acronym MINUSMA. The country has paid a great price, he said, noting that 74 of its peacekeepers had given their lives over the years.

The UN chief also awarded a Letter of Commendation to Lieutenant-Colonel Chahata Ali Mahamat, who stood shoulder-to-shoulder with Captain Abdelrazakh and helped to evacuate 16 wounded colleagues.

Letters of Commendation were also conferred on two other blue helmets: Sergeant Cristofer Jose Citan Ramos of Guatemala from MONUSCO, the UN Mission in the Democratic Republic of the Congo, and Captain Mohammad Mahatab Uddin of Bangladesh, serving with the UN Mission in South Sudan (UNMISS). 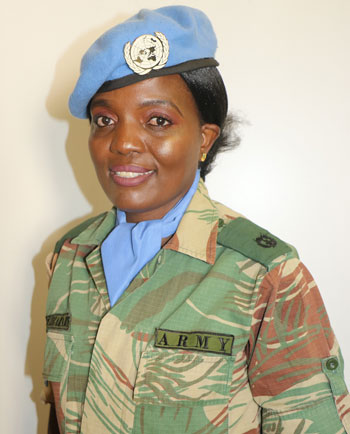 Major Winnet Zharare of Zimbabwe was also presented the Military Gender Advocate of the Year Award.

The former military observer, who has completed her assignment at UNMISS, was a strong champion for gender equality and the recognition of women as decision-makers and leaders.

Major Zharare called for parity within her own ranks, and among local military forces and host communities, the UN chief said.

“In South Sudan, her diligence and diplomatic skills quickly gained the trust of local military commanders who sought her advice on women’s rights and protection. Her approach helped UNMISS strengthen bonds with local communities and deliver on its mandate.”

Mr. Guterres used the opportunity to highlight how women peacekeepers make a profound difference.  Not only do they help the UN do its job more inclusively and effectively, they also save – and change – lives.

“That is why we are constantly striving to increase the number of women in peace operations – whether military, police or civilian – and reach gender parity everywhere,” the UN chief said.