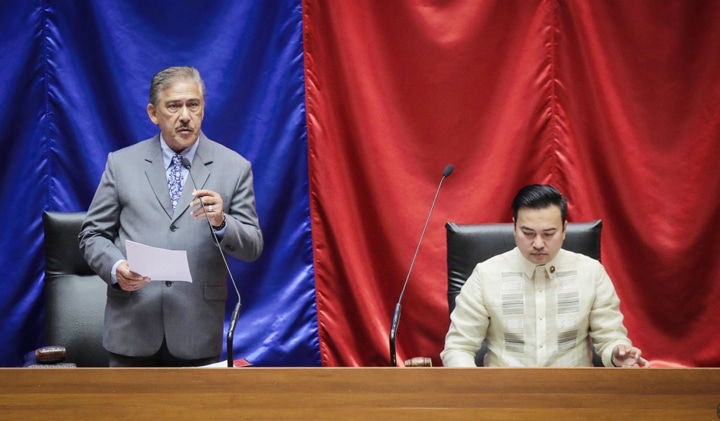 THE canvassing of votes for the presidential and vice presidential race got a speed boost right after it began on Tuesday at the Batasang Pambansa after Vice President Leni Robredo’s counsel made a “continuing manifestation of no objection” to the inclusion of all certificates of canvass (COC) in the May 9 elections, drawing hearty praise from the camp of presumptive president Ferdinand “BongBong” Marcos Jr.

Veteran election lawyer Romulo Macalintal made the manifestation just as the contingents from the Senate and the House of Representatives began the process of canvassing of COCs for president and vice president—races which, unofficial tallies show, were won by landslide by Marcos Jr. and his running mate Sara Duterte.

As a result of the “no-objection” manifestation, followed by lawyers of Isko Moreno and Sen. Kiko Pangilinan, the canvassing proceeded at record speed.

Thus, Congress, sitting as the National Board of Canvassers (NBOC), is eyeing to finish 100 certificates of canvass (COC) within

After the 100 COC, Senate Majority Leader Migz Zubiri, co-chairman of the canvassing panel, said the NBOC will take a break and will resume on Wednesday at 9 am.

As of 8:04 pm, Tuesday, the NBOC already processed 71 out of 173 COCs from different cities and provinces in the country and votes from Philippine posts in other countries.

Meanwhile, the NBOC temporarily deferred the canvassing of votes for Surigao del Sur due to missing COC.

According to Zubiri, the provincial COC of Surigao del Sur has been located at the Provincial Election Supervisor Office (PES).   April Joy Balaño, provincial election supervisor of Surigao del Sur, confirmed that the COC was still in their possession, saying it was inadvertently mixed with the COCs for other positions. The NBOC allowed Balaño to send the copy of COC through viber.

Marcos Jr.’s lawyer Vic Rodriguez said Marcos will attend the proclamation of winners once the NBOC finishes the official canvassing of votes.

The NBOC is eyeing to formally proclaim the duly-elected president and vice  president of the Philippines by Wednesday afternoon.

Once the canvassing is completed, the joint committee report shall be approved and signed by a majority of the members of the Joint Committee.

The report shall be approved and signed by a majority of the members of the Joint Committee. Each panel will vote separately.

After which, the report shall be submitted to the joint public session for consideration and approval. A majority of senators and House members, voting separately, shall approve the report and adopt the resolution of both chambers proclaiming the duly elected President and Vice President.

In his manifestation, Macalintal said that, “consistent” with Robredo’s public address to supporters right after the elections, when she urged them to respect the decision of the majority as it became clear Marcos Jr. was winning by landslide.

“And so as not to delay the proceedings of this board, we would like to make of record our continuing manifestation that we interpose no objection to the inclusion in the canvass of all the certificates of canvass for president from the various provincial and city boards of canvassers found by this honorable board to be authentic and duly executed,” said Macalintal.

“With that continuing manifestation, may we be allowed to respectfully waive our appearance before this joint committee to further expedite its proceedings,” he added.

According to Macalintal, their manifestations were consistent with Robredo’s earlier statements before her supporters to accept the results of the May 9 elections.

“We join in the manifestation of my distinguished colleague and one of the election law practitioners, Atty. Romulo ‘Romymac’ Macalintal. Likewise, we would like to recognize and thank the patriotism exhibited by Vice President Leni Robredo for expressly recognizing the integrity and the result of the recently-concluded general elections,” said Rodriguez.

In a separate press conference, Rodriguez, meanwhile, said they were surprised by the manifestation of Macalintal.

“We were all surprised, but it was a good surprise. It was a show of deep patriotism and I think this is the message demanded by the campaign…message of unity,” he said.

According to Rodriguez, this move will hasten the vote canvassing process.

Meanwhile, the camp of Senator Francis “Kiko” Pangilinan will not raise any objection on all certificates of canvass for vice president, his camp said on Tuesday.

In his manifestation during the joint congressional canvassing, Atty. Renzo Ross Sarte said Pangilinan has no objections to the COCs being processed by the Congress sitting as the NBOC.

He added the Pangilinan camp will also waive its appearance in the joint committee canvassing to expedite its proceedings.

In response, House Majority Leader Martin Romualdez, cochairman of the canvassing panel, lauded  Pangilinan and Robredo for recognizing the integrity of the result of the May 9 elections.

With almost all of the needed COCs available for its processing, Congress could proclaim the winning president and vice president by Thursday, according to the Commission on Elections earlier.

In a televised interview on Tuesday, Comelec Commissioner George M. Garcia said he is confident both Senate and and House of Representatives could achieve the projections made by Senate Majority Leader Zubiri for the completion of the canvassing of votes for the two highest elected positions in the country.

“He [Zubiri] said they could complete it within two days. I believe that a joint session of Congress could complete the canvassing of the 173 COC (Certificate of Canvas) during the said period,” Garcia said.

“Trust Congress as you trusted Comelec that they will be able to promptly complete the canvassing proclaiming the elected president and vice president,” he added.

Unlike the Comelec, which was forced to wait for the transmission or delivery of electronic or manually prepared COCs, respectively, Garcia said lawmakers have the advantage of having immediate access to 172 of the 173 COCs for its canvassing.

To note, it took Comelec, sitting as the National Board of Canvassers (NBOC), nine days after the May 9, 2022 polls to proclaim the winning senators since it has to wait for the arrival of the COCs.

He said the last pending COC from Lanao Del Sur is also expected to be sent to Congress  after the special elections in 12 barangays in the said province last Tuesday.

The Comelec is also waiting for the COC of the said province to announce all of the winning party-list groups by Thursday.  With a report by Samuel P. Medenilla