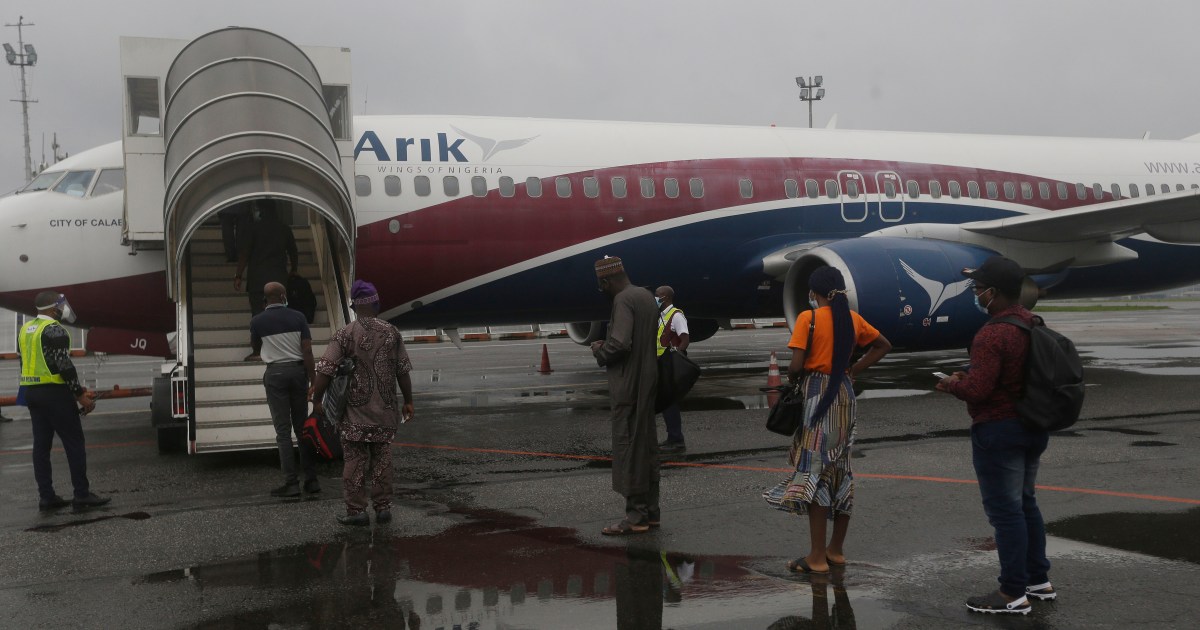 The Airline Operators of Nigeria say price of jet fuel jumped from 190 to 700 Nigerian naira per litre in the wake of the Ukraine war.

Nigerian airlines are to suspend all domestic flights from Monday over a fourfold increase in jet fuel prices, an umbrella organisation of operators said on Saturday.

The Airline Operators of Nigeria said the price of jet fuel had jumped from 190 to 700 Nigerian naira per litre (from $0.45 to almost $1.70). The rise in jet fuel prices is primarily caused due to the Russian invasion of Ukraine in February.

The cost of fuel has soared worldwide since Russia invaded its western neighbour, which triggered a wide range of sanctions by the West on Moscow – a major exporter of oil and gas.

“No airline in the world can absorb this kind of sudden shock from such an astronomical rise over a short period,” the AON said, adding that it would now cost a customer 120,000 naira ($289) for a one-hour flight, a sum unaffordable for Nigerians “already experiencing a lot of difficulties”.

The AON, therefore, wished “to regrettably inform the general public that member airlines will discontinue operations nationwide with effect from Monday, May 9, 2022, until further notice,” it said.

The aviation ministry responded by urging airlines to “consider the multiplier effect of shutting down operations, on Nigerians and global travellers”.

The Nigerian consumer protection agency also implored “domestic airlines to consider the effect of the proposed shutdown on passengers and the magnitude of difficulties and hardship associated with such an action”.

It added it was “concerned with rising consumer feedback that airlines have continued to sell tickets beyond the date announced for the proposed service shutdown.”

“Airlines in Nigeria will shut down their services to passengers from Monday,” one tweeted to more than 110,000 followers.

“I hope you can trek from Lagos to Abuja?” they wrote, of the journey of more than 700 kilometres (more than 400 miles) by road between the country’s largest city and its capital – one that normally takes just more than an hour on an aeroplane.

“If you use the roads, I hope you have your ransom money?” they added, making light of abductions in other parts of the oil-rich country.

Nigeria produces 1.4 million barrels of crude a day, but it refines little. It relies almost completely on fuel imports, making the local market vulnerable to disruptions.

The rising price of fuel has caused prolonged power blackouts in recent weeks.