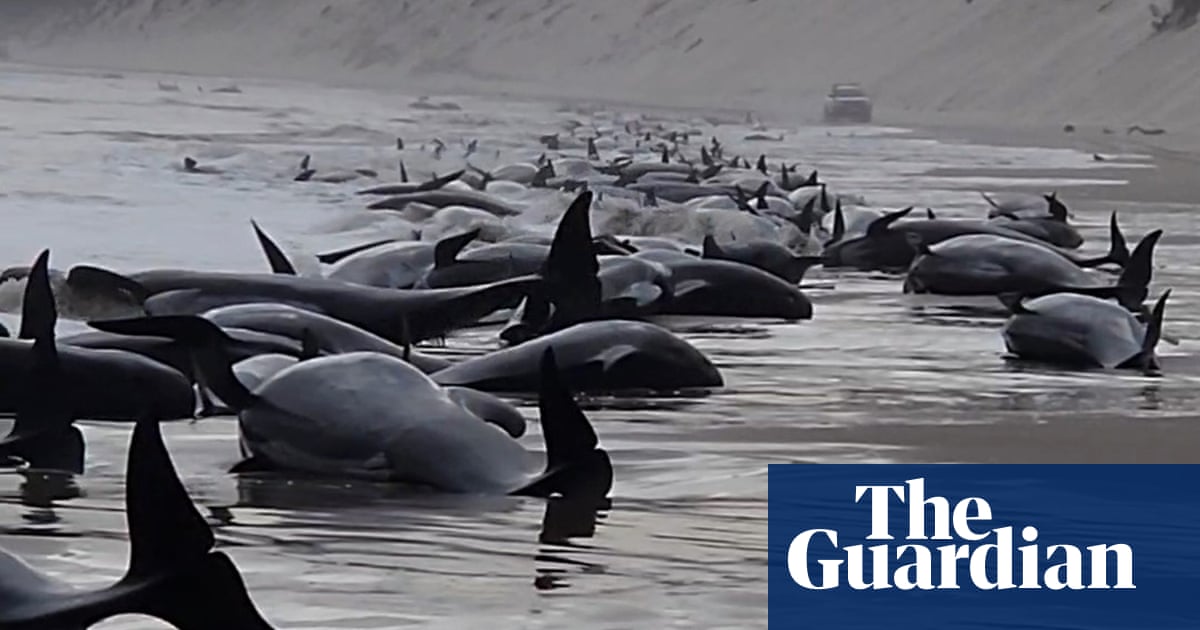 A pod of about 230 pilot whales became stranded on Wednesday on Ocean Beach, west of Strahan. Some were also stranded on a sand flat inside Macquarie Harbour, south of the town.

Only 35 of the 230 cetaceans on Ocean Beach have survived, as rescue and release efforts continue. Marine conservationists launched a rescue mission on Wednesday but the incident controller, Brendon Clark, said on Thursday that tragically most of the mammals on the beach had died.

“Unfortunately, we do have a high mortality rate out on this particular stranding,” he said.

“We positioned them overnight … so that we could assess them this morning,” he said. “We’ve got approximately 35 surviving animals out on the beach – the primary focus this morning will be on the rescue and release of those animals.”

“Yesterday was triaging – identifying those animals that had the best chance of survival. Those animals that were alive, we kept them comfortable, we provided them whatever shade we could, moisture, etc.”

Clark said the exposed conditions on Ocean Beach contributed to the high death rate and said authorities were limiting volunteer involvement only to those with previous marine wildlife training or experience.

“We appreciate all of the offers and all of the goodwill that is expressed from the community. It’s more a matter of having a safe working environment and skilled and trained personnel.”

The environmental conditions on Ocean Beach were much more difficult compared to the relative shelter of the estuary, where another mass stranding event occurred two years ago, Clark said.

In 2020, 470 long-finned pilot whales were found beached on sandbars and trapped inside the heads of Macquarie Harbour – the worst mass stranding on record in Australia. “The animals last time were pretty well half-floating,” Clark said. “They had some buoyancy.”

Authorities have asked vessel operators within Macquarie Harbour to monitor for potential strandings at other sites. “We will be doing patrols ourselves both via air reconnaissance and also harbour sweeps via vessel,” Clark added.

“We are conscious that some of them may re-beach themselves and so we’ll be monitoring that,” Clark said. “There are reports of some whales within the harbour precinct, but thankfully, they still seem to be free swimming.”

The mass stranding is the second to occur in two days. At King Island, in Bass Strait, 14 dead sperm whales, all juvenile males, washed ashore on Monday.