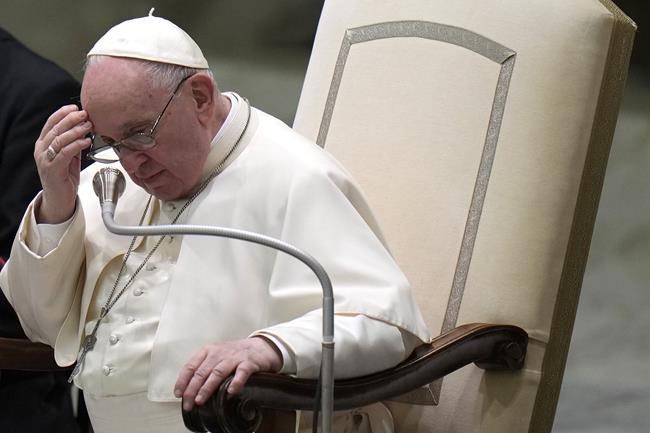 ROME — Métis and Inuit delegates are set to speak with Pope Francis at the Vatican in two separate meetings today.

The Métis delegates will have a one hour meeting with the Pope first and the Inuit encounter will follow.

Métis National Council President Cassidy Caron has said she hopes it is an opportunity to share stories from residential school survivors.

Caron adds she also hopes to talk about how Métis people are revitalizing their culture and how the church can support those efforts.

Natan Obed, the president of the national organization representing Inuit people, has said he hopes its an opportunity to get justice and hold accountable members of the church who harmed Indigenous children.

First Nations delegates will meet with the pontiff on Thursday.

All three groups of delegates will then gather with the Pope on Friday. All have expressed an expectation that the Pope will commit to apologizing for the Roman Catholic Church’s role in residential schools during a trip to Canada.

An estimated 150,000 Indigenous children were forced to attend residential schools. More than 60 per cent of the schools were run by the Catholic Church.

There are a total of 32 Indigenous elders, leaders, survivors and youth taking part in the meetings at the Vatican. The Canadian Conference of Catholic Bishops, which has organized and is paying for the delegation, is also sending a handful of members.

Rev. Raymond Poisson, the group’s president, has said he expects the meetings to allow Pope Francis to address the ongoing trauma and legacy of suffering faced by Indigenous people to this day.

“As well as the role of the Catholic Church in the residential school system, which contributed to the suppression of Indigenous languages, culture and spirituality,” he said.

This report by The Canadian Press was first published March 28, 2022.