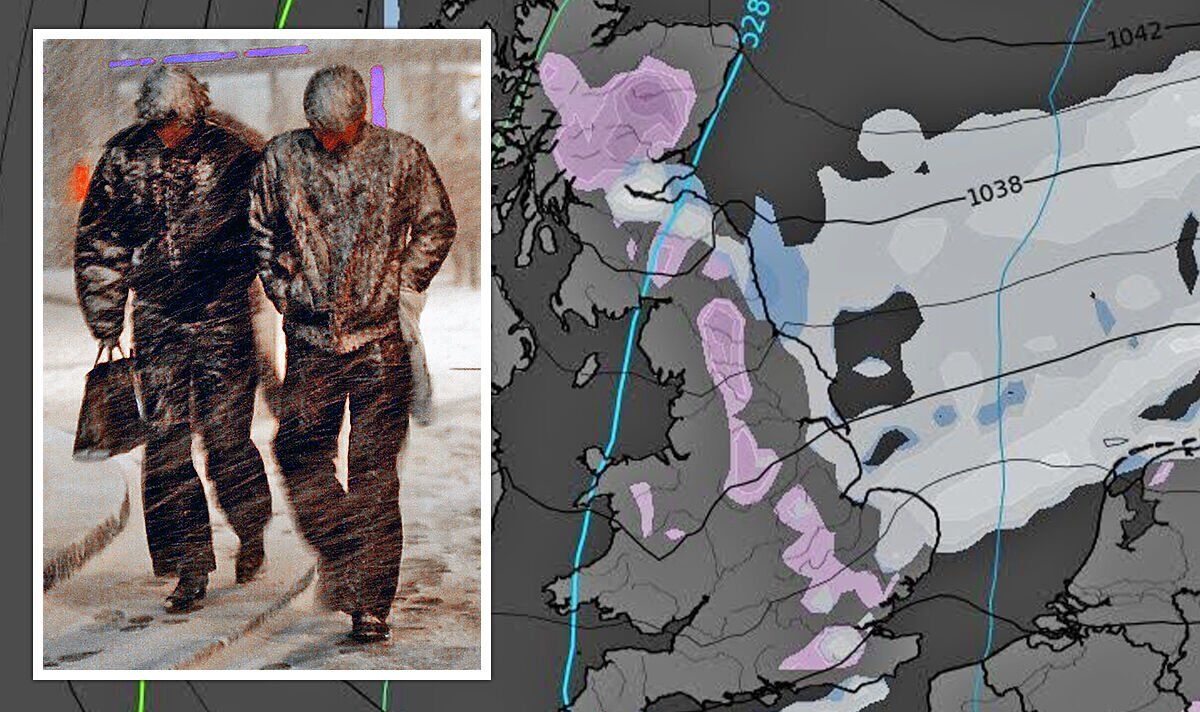 The man who coined the Beast from the East phrase some two decades ago is predicting it could be returning to the UK in days, bringing an Arctic freeze and flurries of snow. Jim Dale, senior meteorologist at British Weather Services, told Express.co.uk: “At this moment the Beast is slumbering in central Russia, moving his eyes in our direction but but nothing more, yet.”

Many will remember the freezing weather of 2018 which struck the UK bringing snow and sub-zero temperatures leading to its moniker Beast from the East due to the direction the weather front had emerged from.

Mr Dale is predicting on December 1, the first day of winter, the start of colder temperatures is to come from the east. But whether the UK will resemble anything like it did in February 2018 remains to be seen, or confirmed at this stage.

Forecasters have noted the easterly chill – but are simply monitoring it to see what it looks set to bring across the continent. In 2018, there were almost 20 deaths attributed to the widespread snowstorms with schools shut, drivers left stranded for hours, trains cancelled and flights grounded.

But, explaining the outlook to Express.co.uk today, Mr Dale added: “It’s tempered. I am still waiting for the specifics, but it is likely to settle with high pressure first, then the easterlies, then snow.”

Looking at the wider picture for the start of December, he added: “It’s colder and once the easterly winds kick in there will be a distinct windchill, then we wait. The signs are there for sure, but the specifics as ever lag behind.”

He said: “What it all means is that we will pick up a colder, drier continental influence into December, cutting off the wet and mild Atlantic regime.

“Snow often follows such a change of airstreams but for us it’s a case of patience and seeing what might develop in the easterly flow. It’s waking and watching, but yet to move.”

The Met Office has yet to officially announce anything regarding this weather system but it has spoken exclusively to Express.co.uk about what it can see thus far. Oliver Clayton, a spokesman for the forecaster said: “The only sign of snow in our forecast at the moment is over the Scottish mountains overnight tonight, not unusual for the end of November.

“In the longer term, there are signals that higher pressure could move in from the East from middle of next week which could act to calm the weather down across the UK and lead to drier conditions. Although this might bring temperatures back down closer to average for the time of year, there is no suggestion of anything similar to the significant cold spell in 2018.”

READ MORE: UK’s Beast from the East to come from Russia bringing snow and ice

In its long-range forecast from November 29 to December 8, the Met Office alludes to colder conditions coming. It says: “On Tuesday, fine and dry with sunny spells for many, perhaps becoming cloudier in the far west later on. These conditions likely to continue throughout the week, with western areas perhaps more unsettled at times with rain and stronger winds more likely.

“Through the rest of the period, changeable and unsettled conditions remain more likely in the northwest, with periods of rain and stronger winds. Southern and eastern areas are more likely to see generally drier conditions, but some showers are possible in eastern coastal areas.

The remainder of the period remains uncertain, however there is potential for some widespread settled conditions to develop. Temperatures overall likely to be around average at first, but with an increased change of somewhat colder conditions developing, compared to the start of this period.”

Then looking even further ahead, to just a few days before Christmas it is loosely predicting the settled period will remain – at least for a time. If the conditions present themselves, then this too could be a factor in bringing snow to the nation.

From December 8 to 22 it continues: “Confidence remains low for this period. Conditions are expected to be more settled than of late, with the potential for high pressure to be located close to the UK, at least at first.

“With time, however, we may see a return to frontal systems moving in from the west, with drier interludes between. Whilst temperatures may average out close to normal overall, colder conditions are possible at times, with a risk of overnight frost and fog.”