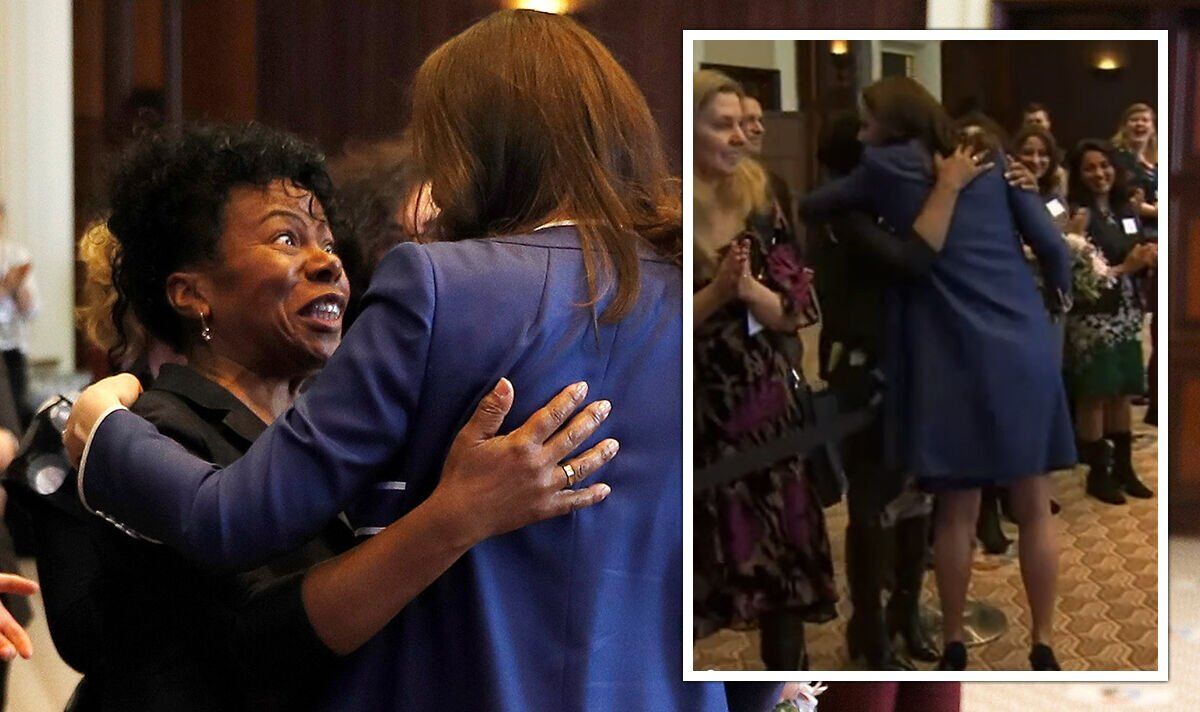 Meghan Markle revealed that her first encounter with Prince William and Kate, the Princess of Wales, turned awkward. Speaking on the Sussexes’ hotly-anticipated Netflix documentary series, Meghan said that her tendency to hug others was “jarring” for William and Kate. However, an unearthed video of Kate launching into a hug with a member of the public has raised doubts over this remark.

In the video, Kate, who was seven months pregnant with Prince Louis at the time, spotted Professor Dunkley-Bent during a visit to the Royal College of Obstetricians and Gynaecologists.

A beaming Kate can be seen running over to the healthcare worker before she gives her an enormous hug.

The midwife helped to deliver Princess Charlotte when she was born at St Mary’s Hospital in 2015.

Royal fan account CelticTribesman tweeted: “Every time I see this video of Catherine, Princess of Wales hugging her midwife I get so teary-eyed.

“It’s such a wonderful display of affection and acknowledgement.”

In fact, Kate regularly gets up close and personal with royal well-wishers, such as on her recent trip to the US with William.

Despite Meghan’s claims, the Princess of Wales has persisted with her informal approach, even if it breaks with royal tradition.

During her interview on Netflix, Meghan said that she was dressed in ripped jeans and was barefoot when she first met Harry’s brother and sister-in-law.

She used this “jarring” encounter with the Prine and Princess of Wales to claim it was a sign that her informality versus their formality would be a big problem in the future.

Later on during the programme, Meghan describes meeting Queen Elizabeth II for the first time.

She jokes about royal protocols and curtsying to the late monarch.

The Duchess compared the curtsy gesture to ‘Medieval Times, Dinner and Tournament’, which is a ‘dinner theatre’ with staged medieval-style games like jousting.