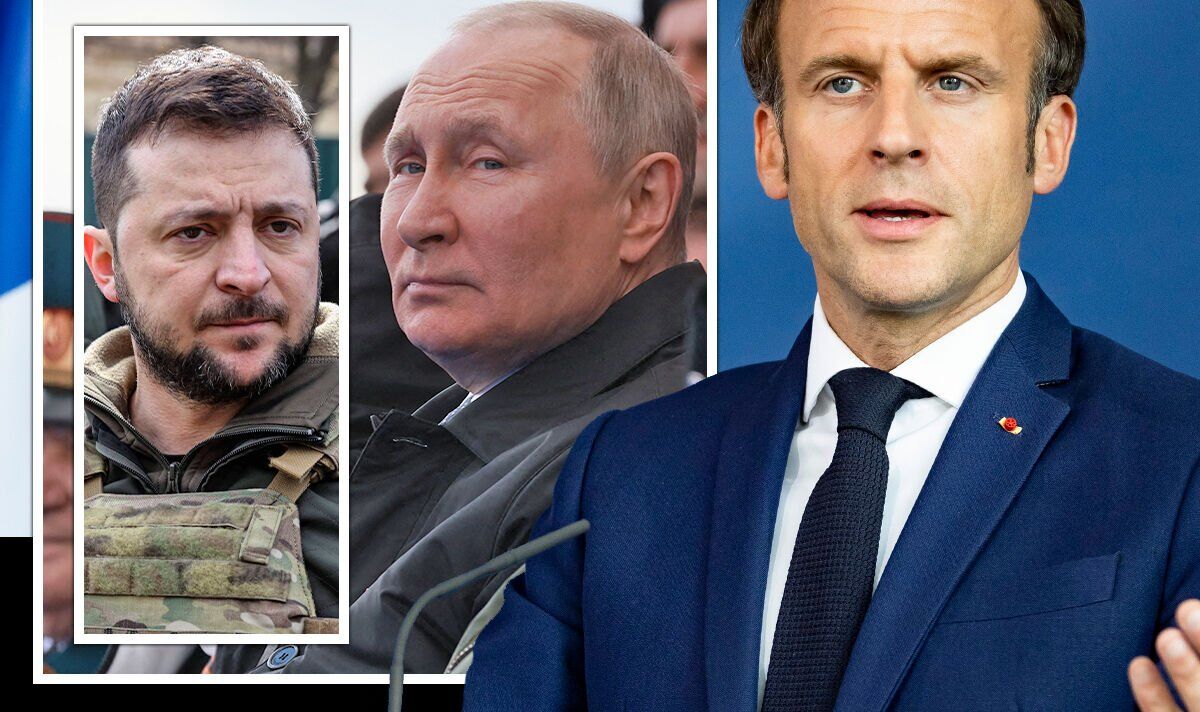 He added: “I know that Putin wanted to bring home some results and that he did not find it.

“But proposing to us to give something to save the face of the Russian president is not correct. We are not ready to save someone’s face by paying with our territories, I don’t think it’s the right thing.”

As for his conversation with President Macron, Mr Zelensky said: “Proposing to us to give up something of our sovereignty to save Putin’s face does not seem right coming from some leaders. It is a waste of time.”

Tweeting from the Visegrad news official Twitter account, the alliance of Eastern European countries said: “Interviewed by Italian TV Rai1, Zelensky confirmed that Macron has proposed for Ukraine to give up some territory to Russia in order to present a face-saving option for Putin.

“Zelensky said it’s out of the question.

“Macron is the one who needs to save his face after this.”

Commenting on the news, a Conservative party member, Mr M Isery-Guts tweeted: “If this is true, Macron is an enemy of Democracy! Allowing a potential war criminal a chance to save face is a total disgrace. The leaders of France and Germany have been shown to be weak. Nobody should respect them again.”

The Elysée, questioned about the alleged friction between Mr Macron and Mr Zelensky that emerged from the words of the Ukrainian president, said on Friday that “the President of the Republic has never discussed anything with Vladimir Putin without the agreement of President Zelensky”.

In addition, the French presidency underlined, Mr Macron “has never asked for concessions from Zelensky. He has always said that it is up to the Ukrainians to decide the terms of their negotiations with the Russians”.

The Ukrainian leader reiterated an offer to hold direct talks with Russian President Vladimir Putin, and said Russia’s withdrawal from Ukraine should be the starting point for any discussions.

He said: “As president, I am ready to talk to Putin, but only to him.

“Without any of his intermediaries. And in the framework of dialogue, not ultimatums.”

Ukraine and Russia have not held face-to-face peace talks since March 29. Russian chief negotiator Vladimir Medinsky was quoted by Interfax news agency on Monday as saying peace talks were being held remotely.

Putin told German Chancellor Olaf Scholz by telephone on Friday that progress in negotiations over an end to the conflict had been “essentially blocked by Kyiv,” the Kremlin said. Kyiv blames Moscow for the lack of progress.

In his fullest public comments for weeks on the prospects of peace talks, Zelensky said Ukraine would not compromise over its territorial integrity.

“Get out of this territory that you have occupied since February 24,” he said. “This is the first clear step to talking about anything.”

Russian forces have taken control of the southern city of Mariupol but are struggling to make headway in Ukraine’s north and east after abandoning a push towards Kyiv.

Russia also controls the Crimea peninsula, which it seized and annexed in 2014, and Russia-backed separatists have declared “people’s republics” in areas they control in two provinces in the Donbas region of eastern Ukraine.

Mr Zelensky said Kyiv had offered to keep Crimea out of talks for now if it complicated efforts to end the war or made talks between him and Putin more complicated. But he added: “We will never recognise Crimea as part of the Russian Federation.”