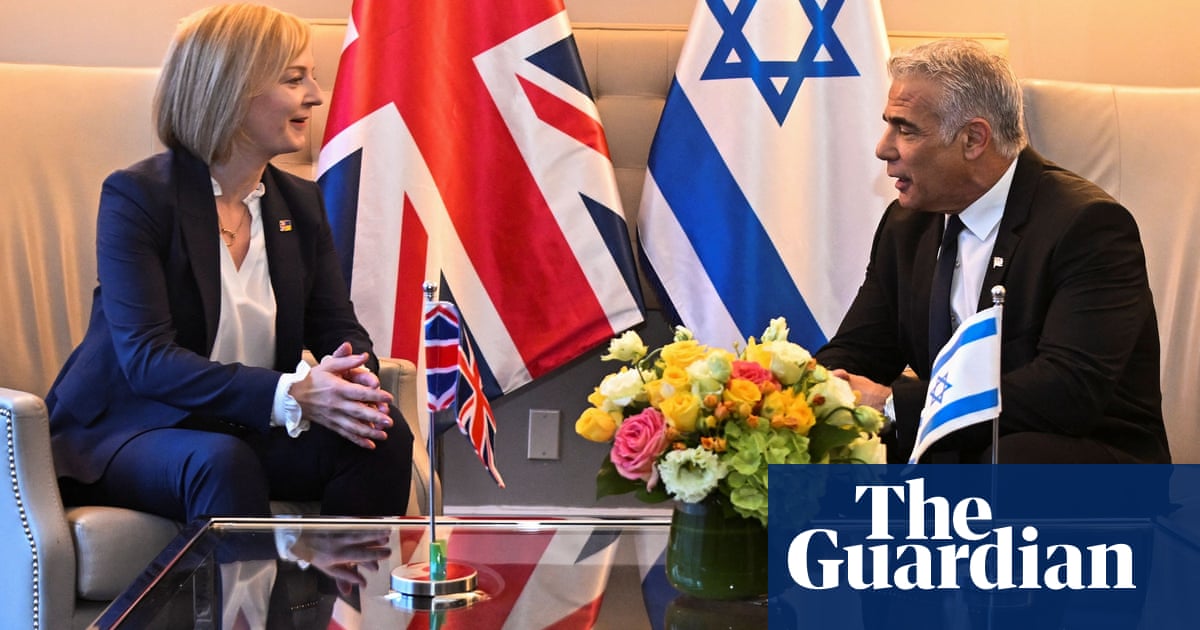 Liz Truss has said she is considering relocating the British embassy in Israel from Tel Aviv to Jerusalem in a controversial move that would break with decades of UK foreign policy in order to follow in the footsteps of Donald Trump.

In a meeting on the sidelines of the UN general assembly in New York, the prime minister told Israel’s caretaker leader, Yair Lapid, about a “review of the current location” of the building, Downing Street said in a statement.

The status of Jerusalem, which Israelis and Palestinians claim as their capital, is one of the most sensitive issues in the long-running conflict.

East Jerusalem, along with the West Bank and Gaza Strip, has been considered occupied Palestinian territory under international law since the six-day war in 1967.

Like the vast majority of the international community, the UK’s position until this point has been that the divided city should host consulates, rather than embassies, until a final peace agreement is reached.

Trump’s 2018 fulfilment of an election campaign promise to recognise Jerusalem as Israel’s capital prompted international condemnation, and led to protests and clashes in which Israeli forces killed dozens of Palestinians. The then UK prime minister Theresa May criticised the move at the time.

On Thursday, the Israeli prime minister tweeted his thanks to Truss for what he described as “positively considering” the move. “We will continue to strengthen the partnership between the countries,” he said.

The Guardian understands that the embassy move was one of a range of options put forward to Truss by Foreign Office staff in late 2021 during her stint as foreign secretary. However, she did not make any substantial policy changes during her two years at the foreign office.

The prime minister appears to have first publicly floated the idea of relocating the embassy in a letter to the Conservative Friends of Israel (CFI) parliamentary group during the Tory leadership campaign over the summer.

She wrote: “I understand the importance and sensitivity of the location of the British embassy in Israel. I’ve had many conversations with my good friend … Lapid on this topic. Acknowledging that, I will review a move to ensure we are operating on the strongest footing within Israel.”

At a hustings with CFI, she vowed that “under my leadership, Israel will have no stauncher friend in the world. That’s what I’ve done as foreign secretary and trade secretary. I don’t just talk the talk – I walk the walk.”

Pressed in the House of Commons on 6 September by the backbench Tory MP Michael Fabricant to follow the US and move the embassy from Tel Aviv to Jerusalem, the Foreign Office minister Amanda Milling said: “The British embassy to Israel is in Tel Aviv. I am aware of the possibility of a review, but will not speculate further on this point.”

Her remarks suggest the review is only just under way, but advocates of the move inside the Conservative party claim the proposal will prove less controversial than even a few years ago due to the Trump administration setting a precedent, and the thaw in relations between Israel and some Arab countries following the Abraham accords.

Downing Street has been contacted to explain how long the review will take.

Other than the US, only three states have embassies to Israel in Jerusalem – Kosovo, Honduras and Guatemala – which all moved from Tel Aviv after the US relocation.