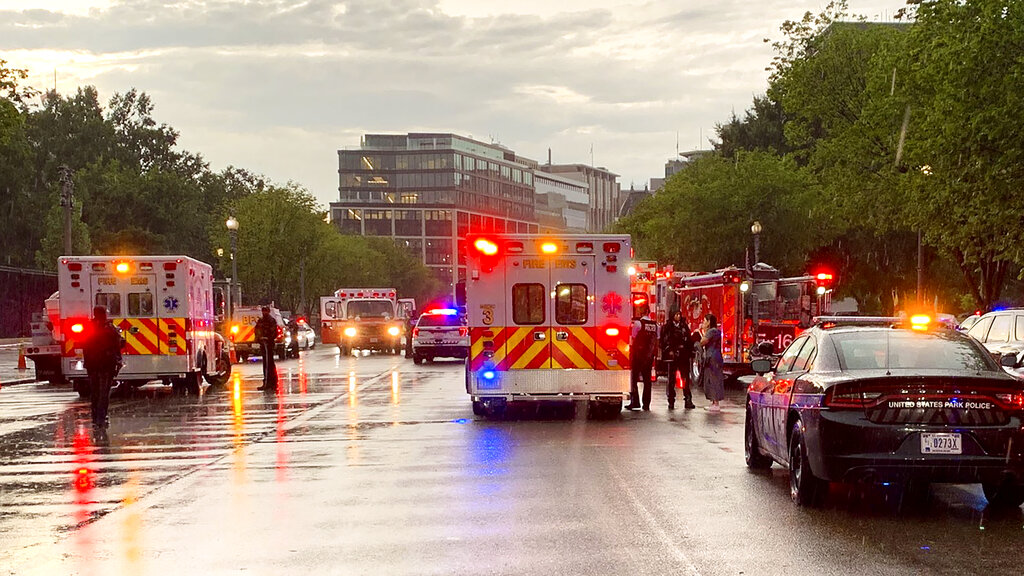 A lightning strike killed two people and critically injured two others near the White House in Washington, DC late on Thursday, local authorities have said.

The Washington Metropolitan Police Department said James Mueller, 76, and Donna Mueller, 75, of Wisconsin, died of their injuries after the lightning strike in Lafayette Park, directly outside the White House complex.

The two other people – a man and a woman – remain in critical condition, the police department said, without identifying them.

DC Fire and EMS had said that US Park Police and uniformed Secret Service agents, who are tasked with protecting the White House, had helped render aid to the four victims after the lightning strike.

A spokesperson said all four suffered “critical, life-threatening injuries” injuries, and were transported to area hospitals on Thursday night.

“We are saddened by the tragic loss of life after the lightning strike in Lafayette Park,” White House press secretary Karine Jean-Pierre said in a statement.

“Our hearts are with the families who lost loved ones, and we are praying for those still fighting for their lives.”

Washington endured thunderstorms on Thursday after a spike in temperatures this week.

The National Weather Service had warned that “record high temperatures are likely in the Northeast, Mid-Atlantic, and the central High Plains”.

Scientists say that climate change is increasing the likelihood of lightning strikes across the United States.

The hot, humid conditions in Washington, DC, on Thursday were primed for electricity. Air temperatures topped out at 34 degrees Celsius (94 degrees Fahrenheit) – or 3C (5F) higher than the 30-year normal maximum for August 4, according to the National Weather Service

More heat can draw more moisture into the atmosphere, while also encouraging rapid updraft – two key factors for charged particles, which lead to lightning. A key study released in 2014 in the journal Science warned that the number of lightning strikes could increase by 50 percent in this century in the United States, with each 1C (1.8F) of warming translating into a 12 percent rise in the number of lightning strikes.

Fast-warming Alaska has seen a 17 percent rise in lightning activity since the cooler 1980s. And in typically dry California, a siege of some 14,000 lightning strikes during August 2020 sparked some of the state’s biggest wildfires on record.

Beyond the United States, researchers have reported evidence that lightning strikes are also shooting up in India and Brazil.

But even as lightning strikes increase, being hit by one is still extremely rare in the US, experts have said. Roughly 40 million lightning bolts touch down in the country every year, according to the Centers for Disease Control – with the odds of being struck less than one in a million.

DC Fire and EMS released a list of tips for residents to protect themselves from thunderstorms, which are also expected on Friday.

“If you hear thunder, you are within striking distance of lightning. Look for shelter inside a home, large building or a hard-topped vehicle right away,” it said.

The advisory warned against sheltering under trees, stressing that “there is no place outside that is safe during a thunderstorm.”