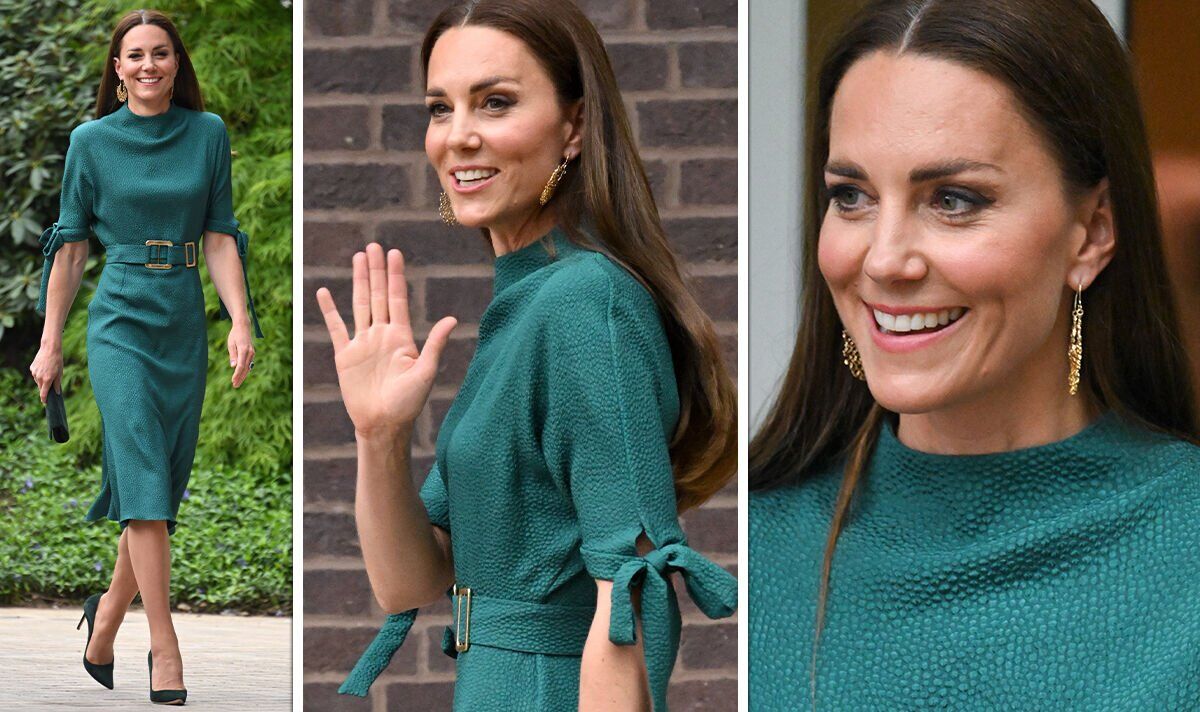 The Duchess of Cambridge, 40, is set to hand out an award first presented by the Queen in 2018. Kate looked stunning in a green belted dress for the royal engagement.

The Duchess teamed her dress with a pair of heels and clutch bag in the same shade.

Kate wore her glossy brunette hair straight around her shoulders and accessorised with statement gold earrings.

The mother-of-three smiled as she arrived for the event.

Kate will present the Queen Elizabeth II Award for British Design, which aims to recognise the cultural and trade role the British design and fashion industry has played throughout the monarch’s reign.

The inaugural award was presented to Richard Quinn in February 2018 when the Queen made her first visit to London Fashion Week.

In this Platinum Jubilee year, the award will be presented by Kate to an emerging British designer.

The funds provide up-and-coming designers with financial support, showcasing opportunities and mentoring as they work to build their brands.

Kate’s engagement on Wednesday comes as she and Prince William are to attend the official opening of the memorial to the 22 people murdered in the Manchester Arena terror attack.

The Duke and Duchess of Cambridge will gather at a service at the Glade of Light – a white marble “halo” bearing the names of those killed in the May 2017 outrage – on May 10, just ahead of the fifth anniversary of the atrocity.

William will speak at the short ceremony and Kate will lay flowers.

The couple will also join a private reception inside Manchester Cathedral afterwards to speak to some of the bereaved families and those involved in the response effort.

The tribute, which opened to the public in January, is located alongside the cathedral and was designed following an international competition.

Personalised memory capsules, filled with memories and mementoes of those killed provided by their loved ones, have been embedded within the stone.

It is conceived as a living memorial – a peaceful garden space for remembrance and reflection, featuring plants which grow naturally in the UK countryside selected to provide year-round colour and echo the changing seasons.

Around the anniversary every year, May 22, the white flowers of a hawthorn tree planted at its centre will bloom.

Hundreds of people were injured alongside the 22 who died, who included six children under 16 with the youngest aged just eight, in the attack by suicide bomber Salman Abedi at the end of an Ariana Grande concert.