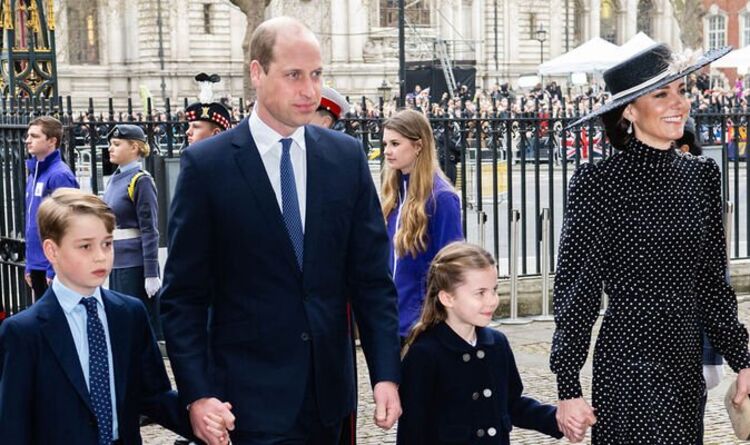 Kate and William wish to move to Windsor as soon as this summer, it has been claimed. The royal couple has reportedly checked out a number of royal homes in the area and is now looking at private homes.

The Duke and Duchess of Cambridge have so far ruled out Fort Belvedere, which was the home of former King Edward VIII and Wallis Simpson for a few years until his abdication in 1936.

Kate and William would have eyed up Frogmore House, it has also been reported.

The residence is approximately one mile away from Windsor Castle and is a favourite location of the Queen who, when in good health, walks her dogs there.

Moreover, last month Her Majesty travelled to this residence to spend an afternoon with some of her closest relatives – including the Cambridges and their three children, Princess Beatrice and her baby daughter Sienna Elizabeth.

Follow the latest updates on the Royal Family here

While there are several homes the Cambridges could take up as their own in Windsor, royal sources have dismissed claims Kate, William and their children Prince George, Princess Charlotte and Prince Louis could be given an apartment in Windsor Castle, The Sun reports.

The report of a possible relocation comes alongside rumours the Duke and Duchess are also considering schools in Windsor, Buckinghamshire and Surrey for eight-year-old George.

It has been claimed Kate and William checked out Lambrook School in Ascot for the third-in-line to the throne, tipped to begin his studies there soon.

However, it has also been reported the couple may want George and six-year-old Charlotte, who are currently attending Thomas’s Battersea together, to go to the same school also in the future.

Among those considered more palatable for the Cambridges, there is Marlborough College in Wiltshire, formerly attended by the Duchess.

Kate and William’s desire to relocate to Windsor comes amid concerns the Duke of York may “springboard back into public life”.

A source told The Sun: “The need to move to Windsor is growing more and more.

“Andrew spends a lot of time with the Queen.

“He lives next door and is always there for her.

“During the Covid lockdown, the family were glad Andrew was always on hand.

“There is not a man, woman or child who would not say he had every right to be at Philip’s thanksgiving.

“But the family have been adamant there’s no way back.

“There are real fears that despite being banished from The Firm in January, he is using his closeness to the Queen as a springboard back into public life.”

The source referred to Prince Andrew returning his military and royal patronages to the Queen in January, the day after US Judge Lewis A. Kaplan refused to throw out the lawsuit launched against the royal by Virginia Giuffre.

The palace also announced at the time Andrew would continue not to undertake public duties, as he has been doing since mid-November 2019.

And royal sources said that, while he was retaining his HRH style, he would no longer use it in any official capacity.

Since the first emergence of the allegations against him by Ms Giuffre, Andrew has firmly denied any wrongdoing.

In February, the Duke of York and Ms Giuffre reached an out-of-court settlement.

This settlement did not constitute an admission of guilt by the royal.