Skip to content
HomeNewsIs Aaron Rodgers America’s most interesting athlete or its most annoying? 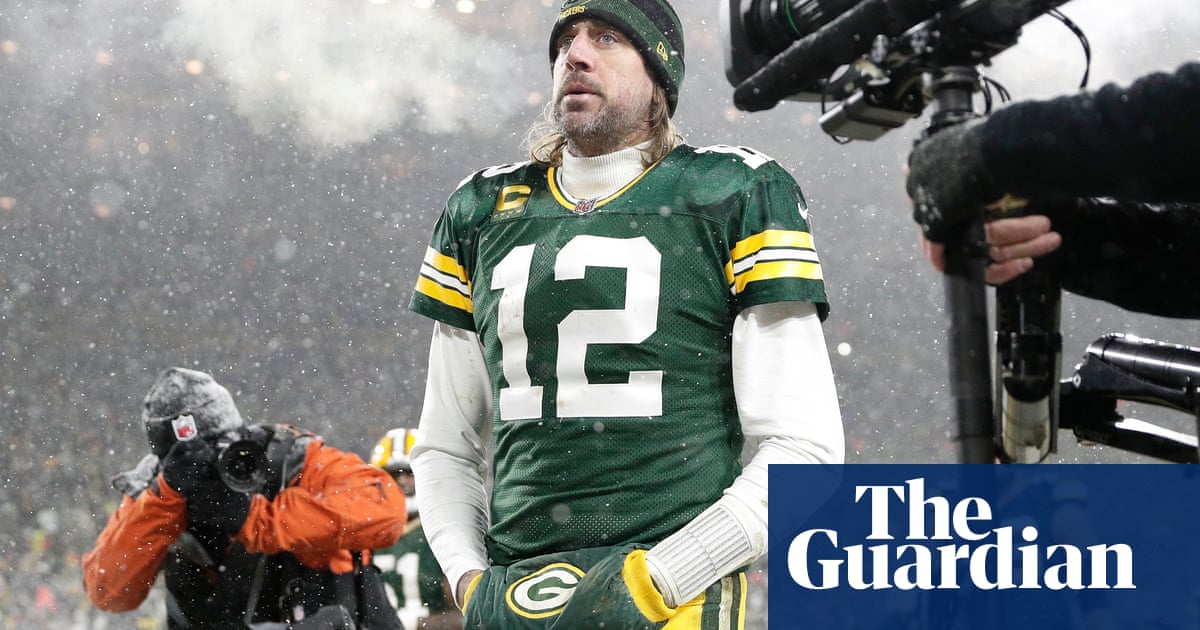 In late July, as NFL players across the country were dragging their battered bodies back to pre-season camp, the Green Bay Packers posted a slow-motion video of Aaron Rodgers on social media. “Let’s do this,” the caption read, while the quarterback, dressed in a vest tucked into a pair of relaxed fit denim jeans, hair swept back, facial scruff untamed, strode purposefully across a parking lot. The clip was, of course, a tribute to Nicolas Cage’s performance in 1997 action classic Con Air. A few weeks later, Rodgers revealed that he had been sent a bust of Cage’s head. The bust now sits in Rodgers’s locker, next to his shoulder pads, calmly looking on as the NFL’s reigning MVP goes about the torrid business of trying to turn himself into a figure of cross-cultural significance.

Is Rodgers America’s most interesting athlete, or its most annoying? For much of the 38-year-old’s career in the NFL – now entering its 18th season – the question did not even present itself. Quarterbacks are the focal point of every football team, usually the only players with the star power to transcend the sport. But even as he rose to prominence around a decade ago, leading the Packers to the Super Bowl in 2011 and nabbing two league MVP awards in 2011 and 2014, Rodgers remained an extremely talented but mostly unremarkable fixture of the American sporting scene. If he was seen as anything away from the field, it was as something of a social activist. He went on the record with his support for The Enough Project, a nonprofit raising awareness about the use of conflict minerals in cellphone batteries. He traveled to India with the Starkey Hearing Foundation to fit hearing aids on deaf children, taking a detour to see the Dalai Lama. And in 2015, after a fan broke a minute’s silence at a Packers game held out of respect for victims of the Paris terrorist attacks with the cry “Muslims suck!”, Rodgers used his post-game press conference to eloquently admonish the fan: “It’s that kind of prejudicial ideology that I think puts us in the position that we’re in today, as a world,” he said.

In the past two years, however, as the on-field accolades have piled up (he was named MVP in 2020 and again last season) without ever quite reaping any gains for the team he leads (Green Bay have reached the playoffs but fallen short of the Super Bowl in each of the last three seasons), Rodgers has become that most relentless of sporting cliches: the athlete who cannot be mentioned in news reports without the addition of the qualifier “controversial”. The cleanskin quarterback, avatar of the league’s “good guys”, has been transformed into a symbol of national polarization. Rather than declaiming earnestly on the moral rot of cobalt mining in central Africa, Rodgers is more likely these days to be found on Joe Rogan’s podcast or The Pat McAfee Show, complaining about the “woke mob”. There’s speaking out and there’s this: speaking incessantly, without pause, and mostly about yourself.

The proximate cause of this journey from progressive ally to all-purpose cultural punching bag is, perhaps a little disappointingly, Rodgers’s views on vaccination. Last summer Rodgers claimed, with pedantic attention to word choice, that he was “immunized” against Covid-19; late last year it emerged he was in fact not vaccinated against the virus (he’d claimed immunization on the basis of an alternative treatment from his personal doctor) and had misrepresented his inoculation status to the league and his teammates, prompting the NFL to fine him for violating its Covid protocol. This contretemps has been enough to radicalize Rodgers, turning him into the kind of self-declared victim who propounds at length on his own “cancel culture casket”, while doing his bit to push discredited Covid remedy Ivermectin.

In a trademark move, however, Rodgers has tried to rise above the fray, even as he’s continued to stoke the fires of cultural discontent. “I can say with honesty to my detractors and haters, I don’t have bitterness towards you, I have nothing but love and appreciation for where you’re at in your life and all the different emotions that impact our personalities and our decision-making and our belief system on a day-to-day basis,” he told Pat McAfee last week.

McAfee, a former footballer and wrestling commentator whose radio show, which is also broadcast live on YouTube, regularly features extended, free-form conversations with Rodgers, has become a particularly important ally for the Packers star. Rodgers now occupies an exalted position in the mediaverse that has consolidated around figures like McAfee, Rogan (perhaps the most vocal of the self-described vaccine skeptics), and Barstool Sports’s Dave Portnoy – a kind of muse for the bros. The signature gesture of this world, and what differentiates it from previous iterations of fratboy media, is that it purports to embrace, rather than reject, intellect and emotion, that whole messy business of having thoughts and feelings; Rodgers speaks often about his love of reading (the only two places he goes in Green Bay, he recently said, are “the grocery store and Barnes & Noble”), and presents his refusal to get vaccinated as a triumph of intellectual will, as the result of research and deep reflection. But someone who genuinely likes books probably wouldn’t spend so much time telling McAfee how much they like books. They’d be at home, reading.

It’s essential to the Rodgers mythos that we see him not only as a fighter, but as someone with a rich inner life: the reason he can get it done on the field is because he’s spent so much time off it “working on himself”. Rodgers did not come to success easily: a star quarterback in high school, he was famously rejected by every top-tier college football program (though the University of Illinois offered him a place as a walk-on), and only earned a transfer to the University of California through the community college network. He grew up in a religious family in the town of Chico in inland northern California; later he rejected organized religion. Throughout his life Rodgers has maintained an admirable commitment to doing things his own way, to seeking his own truth. Now, however, he’s a fabulously wealthy professional athlete – recently he signed a three-year, $150m deal that will keep him at the Packers into his 40s, enough to take his career earnings close to half-a-billion dollars by the time he retires.

With this success has come a kind of corny self-obsession. In July Rodgers shared a photo of his first tattoo, which looks like the kind of thing you might come up with if you were a conspiracy theorist who wanted to start an accounting firm, telling his 2 million Instagram followers: “There’s a deep and meaningful story and connection to absolutely each element of this art piece, and I’ll share a little more about that one day.”

Rodgers has also been vocal about his use of ayahuasca: twice now he has descended on the ancient ruins of Machu Picchu and then taken the psychoactive brew, forging an unlikely spiritual connection between the Sacred Valley and Lambeau Field. Rodgers claims ayahuasca has opened his mind (“It changes the way you look at the world, you feel way more connected”) and made him enjoy football again. These two trips to Peru have re-prioritized his own need for “self-love” (“I love myself. Period. Period. Period.”), a point Rodgers recently made at length in an interview with Aubrey Marcus, a self-described “author, podcaster, entrepreneur, filmmaker, philosopher, poet, husband” who is also the founder of Onnit, a “globally disruptive brand” based on a “holistic health philosophy” called “Total Human Optimization”.

Whatever the ickiness of his association with salesman of this variety (how long until we get an Aaron Rodgers-endorsed nootropic?), “total human optimization” offers a neat summary of what Rodgers appears to be going through. Desperately, it seems, the man is searching for something, anything, to make himself interesting, to show us he’s much more than just an athlete. Gaze on me, he seems to be telling us, and appreciate the profound non-footballing mind within this champion body.

At the same time Rodgers has tried to market himself as a kind of everyman. There was the stint last year guest hosting on Jeopardy!, which led to excitable calls for him to become the game show’s post-Alex Trebek frontman. There’s the silly mustache he wore for a few years (crazy guy!). There’s a social media feed that goes heavy on golf clips and memes from The Office, the pop culture equivalent of a burger and fries. Then, of course, there are the attempts at crowd-pleasing internet comedy, like that pre-season video. To be clear, there is something decidedly lame about a 38-year-old man fishing for likes with a Con Air parody video. The ironic Nicolas Cage tribute is maybe the internet’s deadest joke. Perhaps this is simply what it means to be a contrarian, to live life against the grain, rejecting convention and spurning fashion: perhaps there is a special courage – the courage of the elite athlete – that comes from being middle aged in the year of our lord 2022 and uploading a Harlem Shake.

But this is the Rodgers way: self-revelation in the service of maximum exposure. Things have been calmer for the NFL since the traumas of the Trump-Kaepernick years: the refusal of players to stand for the national anthem or accept the hegemony of the police state no longer attracts national news. But the tensions at the heart of the NFL remain. Rodgers, who expressed public support for Kaepernick and defended players who kneeled for the anthem (while also stressing, in a characteristic threading of the needle, that “we love and support and appreciate the troops”), offers a reconciliation of sorts for the rival camps of a league torn between conservatives and progressives. A warrior of both the field and the culture, an individual rights fetishist who wants the collective to work too, a footballer with feelings, a winner with a sense of humor, a jock who fancies himself a nerd, Rodgers offers the third way – the way of “just asking questions” contrarianism, in which everyone can find a capacious home for their inner contradictions. He wears the face of reason while spouting nonsense – a hero the whole of America can get behind.