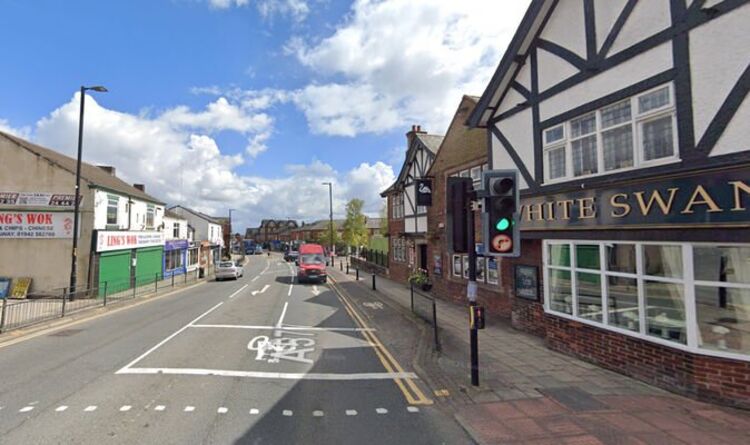 The woman, in her 40s, was taken to hospital after the silver Freelander mounted the pavement on Ormskirk Road, in the Pemberton area to the south-west of the town. She later tragically died. A further two male pedestrians were left suffering with “serious injuries”, Greater Manchester Police said in a statement.

Two men have been arrested on suspicion of causing death by dangerous driving.

Officers were called to the scene around 9.20pm on Friday following reports of a road traffic collision.

The car was said to have been travelling towards Orrell Road when it collided with pedestrians near a pub.

Police arrived to a hit-and-run, with the driver failing to stop at the scene following the crash.

Greater Manchester Police said that officers had now arrested two men, who as of 10am this morning remain in custody.

PC Oliver Batty, from GMP’s Serious Collision Investigation Unit, said: “Our thoughts are with the woman’s family who are understandably devastated by the circumstances of how their loved one has lost their life.

“We immediately launched an investigation into the circumstances and the road has been closed for some time whilst we carried out a number of enquiries.”

The scene of the incident remains closed and police are advising drivers in the area to use alternate routes.

A spokesperson for Greater Manchester Fire and Rescue Service told Manchester Evening News that three fire engines had been despatched to the scene at around 9.30pm.

They said that crews “arrived quickly at the scene” and assisted paramedics in treating the injured.

“Firefighters were in attendance for around three hours.”

PC Batty continued: “We’re keen to hear from anyone who may have any information or dash-cam footage that may be able to assist with our investigation and give the woman’s family the answers they deserve.”

Police invited anyone with information to call 0161 856 4741 or report it online or via LiveChat on their website.