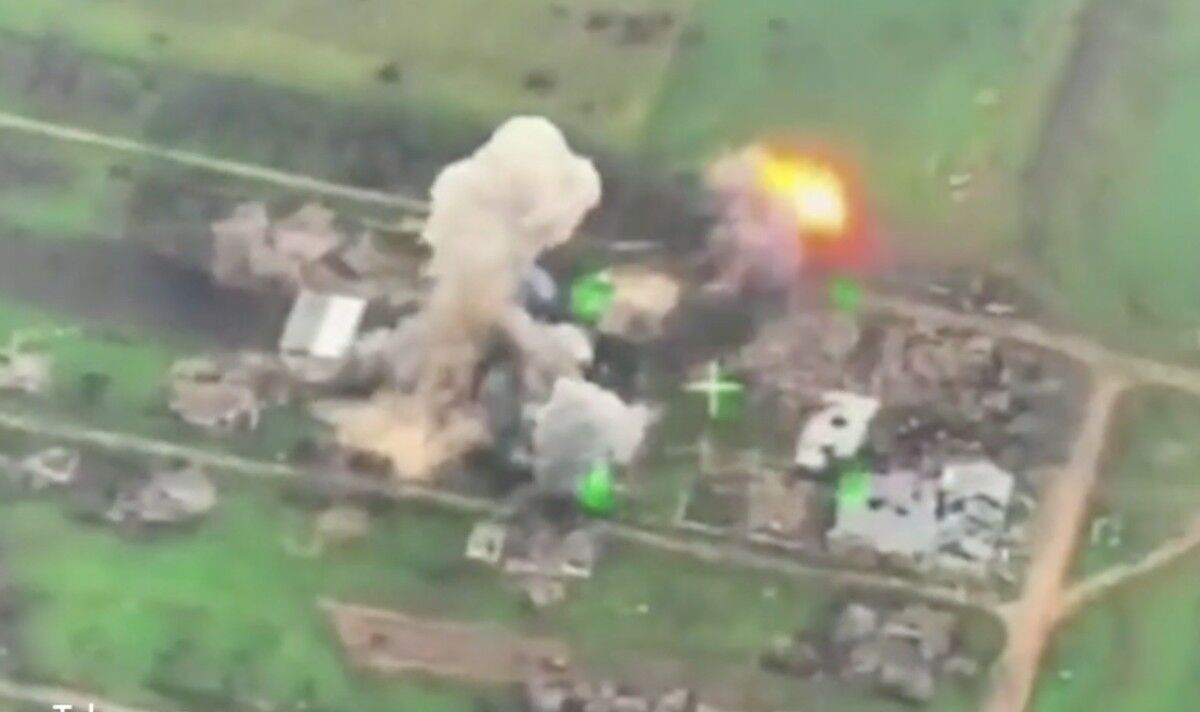 A drone has captured the terrifying moment missiles rain down on Ukrainian positions after Russia‘s soldiers targeted the area with thermobaric rockets. Thermobaric weapons have become a hallmark of Russian military operations in Ukraine and create widespread devastation with massive fireballs erupting on impact.

The thermobaric TOS-1A MLRS system operates akin to a fuel-air bomb in that the exploding missile sends highly flammable fuel vapour in all directions.

This mix is then ignited by a second charge resulting in a firestorm and massive shockwave that can rip through bunkers and rupture internal organs.

The use of the fearsome weapon is not banned by any international arms treaties, unlike other lethal munitions such as cluster bombs.

The footage emerges as Ukraine’s military said on Tuesday it was working to evacuate all remaining troops from their last stronghold in the besieged port of Mariupol, ceding control of the city to Russia after months of bombardment.

The evacuation of hundreds of fighters, many wounded, to Russian-held towns, likely marked the end of the longest and bloodiest battle of the Ukraine war and a significant defeat for Ukraine. Mariupol is now in ruins after a Russian siege that Ukraine says killed tens of thousands of people in the city.

“The ‘Mariupol’ garrison has fulfilled its combat mission,” the General Staff of Ukraine’s Armed Forces said in a statement.

“The supreme military command ordered the commanders of the units stationed at Azovstal to save the lives of the personnel … Defenders of Mariupol are the heroes of our time,” it added.

Ukrainian Deputy Defence Minister Anna Malyar said 53 injured troops from the steelworks were taken to a hospital in the Russian-controlled town of Novoazovsk, some 32 km (20 miles) to the east, while another 211 people were taken to the town of Olenivka, in an area controlled by Russian-backed separatists.

All of the evacuees will be subject to a potential prisoner exchange with Russia, she added.

About 600 troops were believed to have been inside the steel plant. Ukraine’s military said efforts were underway to evacuate those still inside.

“We hope that we will be able to save the lives of our guys,” Ukrainian President Volodymyr Zelensky said in an early morning address. “There are severely wounded ones among them.

But fierce fighting and shelling continued across a broad area of the country’s east.

Zelensky’s office said on Tuesday the entire front line around Donetsk is under constant massive shelling, while in the northern region of Chernihiv, a missile strike on the village of Desna killed and wounded an unspecified number of people.

Ukraine’s general staff said Russian forces were reinforcing and preparing to renew their offensive near Slovyansk and Drobysheve, southeast of the strategic town of Izyum, having suffered losses elsewhere.