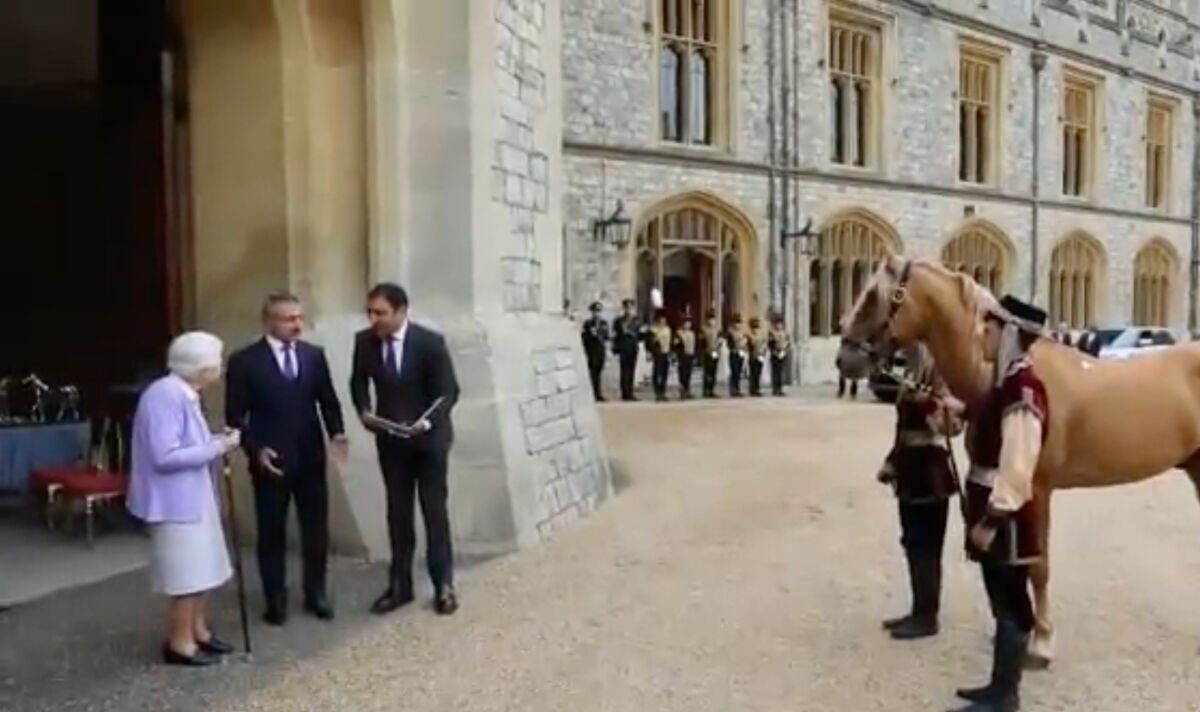 In the courtyard of Windsor Castle, the 96-year-old monarch was presented with a rare Karabakh horse as a gift from President Ilham Aliyev. The Queen was pictured smiling and clutching a walking stick, as she met with representatives of the Equestrian Federation of Azerbaijan.

Alongside the horse, named Shohrat which means glory, the sovereign was also the recipient of two equestrian-themed sculptures made by Azerbaijani sculptor Faiq Hajiyev.

The monarch received the presents from the President after his country was invited to perform at the recent Platinum Jubilee celebrations.

The Queen, who has a lifelong passion for all things equestrian, described the gesture as being “very kind, very generous.”

The Karabakh horse is native to Azerbaijan and is used for endurance events and races.

One recently sold at auction for the equivalent of £14,000.

The country has taken part in the Royal Windsor Horse Show since 2012.

For this year’s performance, Azerbaijan equestrians performed a colourful Land of Fire show that featured traditional music and dances as well as riders waving the country’s flags.

The monarch was pictured watching A Gallop Through History, on Sunday – just one day before these photos were taken.

The horse-themed event was attended by celebrity names including Tom Cruise and Dame Helen Mirren.

The event is traditionally a staple in the Queen’s calendar, and this year it was made all the more poignant as it featured a tribute to her late husband Prince Philip.

The couple’s granddaughter Lady Louise Windsor drove her late grandfather’s carriage around the arena, nodding to her and the Duke of Edinburgh’s shared love of carriage driving.

The Queen watched on proudly as the 18-year-old daughter of Prince Edward and Sophie, Countess of Wessex, took part in the procession to mark the finale of the event.