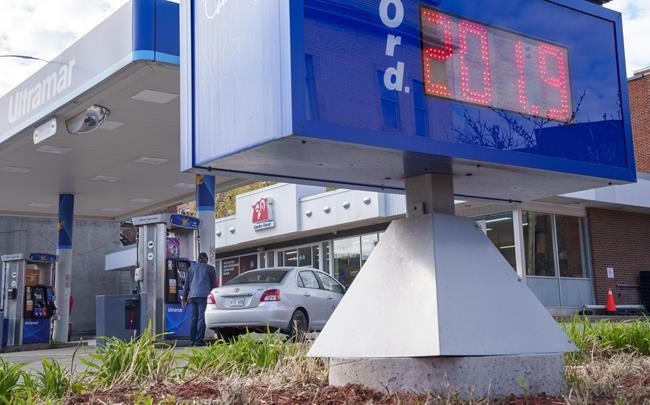 In May, customers paid 48 per cent more at the pump than a year earlier as a result of high crude oil prices, caused in turn by supply bottlenecks after Russia’s invasion of Ukraine and a leap in demand prompted by eased COVID-19 restrictions.

The price of gasoline jumped 12 per cent between April and May, the largest one-month price increase since January 2003, the agency said Wednesday. That surge helped propel last month’s 34.8 per cent rise in energy prices year over year.

The cost of consumer items as a whole rose 7.7 per cent last month compared with a year ago, its largest increase since January 1983 when it gained 8.2 per cent, StatCan said.

Gas prices are expected to rise another five per cent in June, projected Bank of Montreal chief economist Douglas Porter.

“In other words, we have a problem,” he said in a research note.

“While energy will shoulder much of the blame for the latest spike, it’s important to note that many measures of core inflation are now at or near five per cent, so this is well beyond a one-off move that will quickly fade even if oil prices relent.”

Service, which are driven mainly by domestic forces, are now up 5.2 per cent year over year, Porter noted as an example.

Higher oil prices have also pushed up the price tag of jet fuel. The figure hit US$176.13 in North America on Friday, up 17 per cent from a month earlier and 126 per cent from a year ago, according to the International Air Transport Association.

“I would expect airfares — most definitely in comparison to what they were in 2020 and 2021 — will be higher. We’ll see how they compare to 2019,” said former Air Canada chief operating officer Duncan Dee in an interview.

“It’s really a market dynamic where you see fuel prices spiking but still quite strong pent-up demand from travellers chasing fewer seats.” Most fleets are not back up to 2019 capacity after two years of meagre sales amid COVID-19 restrictions.

Of the 18 cities highlighted by StatCan, average gas prices in May notched highest in Vancouver and Victoria at $2.20 per litre and $2.17 per litre respectively. Quebec City and Montreal took third and fourth place, sitting between $2.05 and $2.07.

Alberta and Saskatchewan enjoyed the lowest regular unleaded gas prices with Edmonton at $1.63, Calgary at $1.67 and Regina and Saskatoon hitting $1.81.

Premier Jason Kenney cut Alberta’s 13 cent provincial excise tax on gasoline on April 1 and said it will stay gone as long as the global benchmark price for oil is above $90 a barrel.

Energy could get costlier still, with Toronto-Dominion Bank chief economist Beata Caranci projecting crude oil price increases will rise even higher in the third quarter than the second-quarter average of $110 per barrel before tapering of toward $100 by year’s end.

In a report Wednesday, she said a “reduced fear premium, some demand destruction and modestly higher global supply” would drive the eventual decrease.

This report by The Canadian Press was first published June 22, 2022.