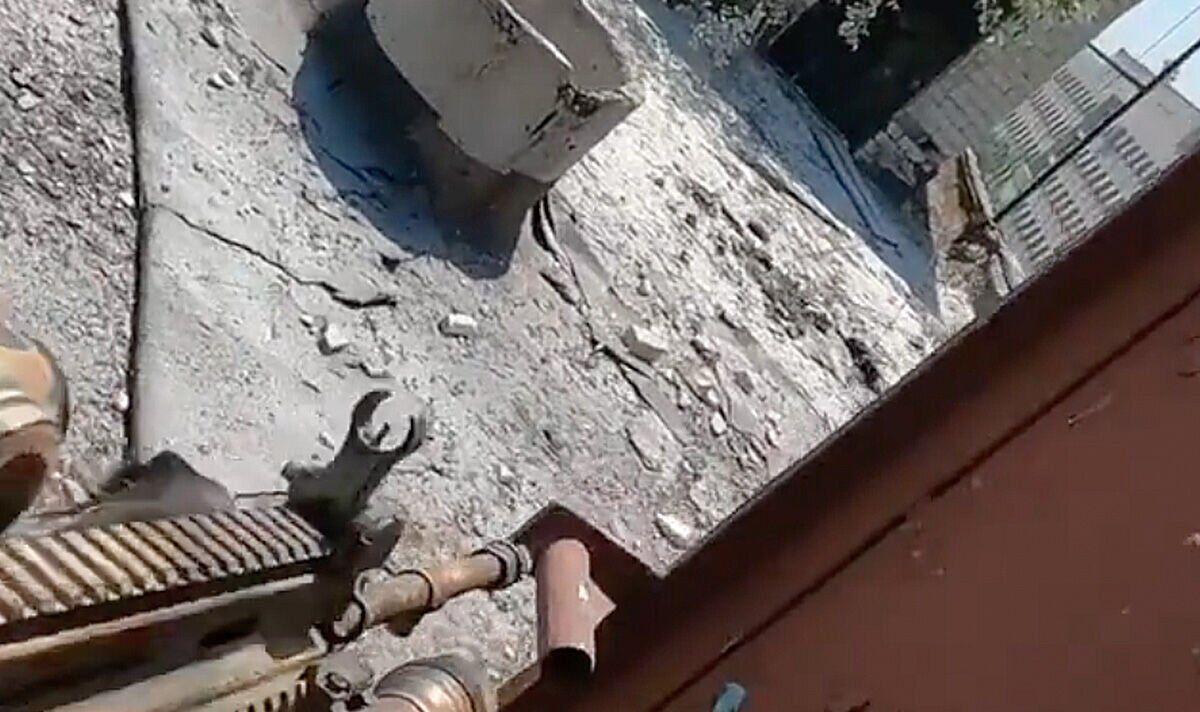 The first-person perspective of the video shows the carrier of the camera assessing the outside threat with his weapon drawn high in front of him. The soldier can be seen taking shelter behind a metal door before they start shooting towards another building, the bullets sparking a wave of cloud when hitting the wall. Further footage shows a group of Ukrainian soldiers exchanging orders from inside a building as the sound of bullets and grenades seemingly shot from the Russian side resonates around them.

In the additional footage, a group of at least six people can be discussing strategy before one of them exits their shelter to start shooting to offer protection to his team as they leave the building.

The men can be seen running behind the shooter before entering another building.

The footage was shared on Instagram by an ex-Canadian Army member who reportedly joined the Ukrainian Foreign legion at the start of the war.

The video was later geolocated and confirmed to have been filmed in Severodonetsk, which is currently sustaining heavy attacks from Russian troops.

JUST IN: ‘You will be a scorch mark on the ground’ Expert reveals chilling nuclear warning

The region’s governor said on Sunday that Ukraine remains in control of the Azot chemical plant in Severodonetsk where hundreds of civilians are sheltering,

Serhiy Gaidai said on Ukraine’s television: “Azot is not blocked, fighting is going on in the streets next to the plant.

Mr Gaidai added that he expects Russian forces to use all their efforts to try to capture the city either on Sunday or on Monday.

Russian media reported a huge cloud of smoke could be seen after an explosion in the city of Avdiivka, which houses another chemical plant, in the neighbouring Donetsk province.

Putin calls the invasion a “special military operation” to disarm and “denazify” Ukraine. Kyiv and its allies call it an unprovoked war of aggression to capture territory.

Severodonetsk has become the epicentre of the battle in eastern Ukraine for control over the industrialised Donbas region.

The region is made up of the Luhansk and Donetsk provinces which Vladimir Putin recognized as independent days before he launched his invasion of Ukraine.

Weeks of fighting pulverised parts of the city and have been some of the bloodiest since Moscow began its invasion on February 24.

After being forced to scale back its initial campaign goals, including withdrawing troops that had been menacing Kyiv, Moscow has turned to expand control in the Donbas, where pro-Russian separatists have held a swath of territory since 2014.

DON’T MISS
How the UK, US, and their allies could respond to a nuclear attack [REVEAL]
Putin’s war ‘backfiring’ as US strikes nuclear deal with Ukraine [INSIGHT]
Biden humiliated as Russia and Iran strikes major 20-year energy deal [REPORT]

Putin calls the invasion a “special military operation” to disarm and “denazify” Ukraine.

Kyiv and its allies call it an unprovoked war of aggression to capture territory.

Kyiv has repeatedly appealed to the West for swifter deliveries of heavy weapons including missile systems to turn the tide of the war.

Ukrainian forces have proven more resilient than expected, but the US-based Institute for the Study of War said that as they use the last of their stocks of Soviet-era weapons and munitions, they will require consistent Western support.

Pavlo Kyrylenko, the Donetsk governor, said two civilians were killed in Russian shelling on Saturday and at least 10 wounded.